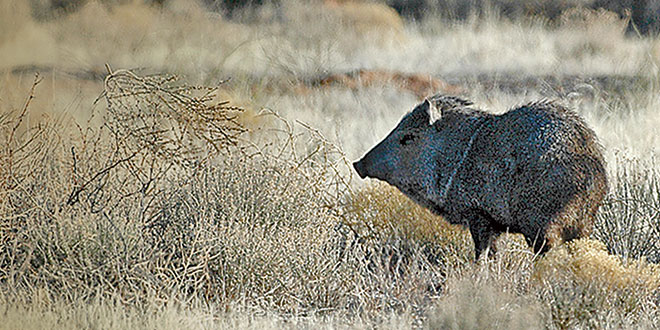 No need to sell wildlife short. All have special tools to survive.

Everyone has heard the saying, “defenseless animal,” but we might want to think twice before accepting that notion, especially when it comes to wildlife.

Above: While poor eyesight might suggest javelina lack the same defenses of other wildlife, they possess a good sense of hearing, a keen sense of smell, and a formidable set of tusks. NMDGF photo by Dan Williams.

“There’s no such thing as a defenseless animal,” said Stewart Liley, chief of the Wildlife Management Division for the New Mexico Department of Game and Fish. “Every animal is equipped with the necessary tools to survive.”

Birds? Whether song bird or raptor, they all can fly. Even ground-based birds such as quail are equipped with many ways to avoid becoming a predator’s snack.

Large covey use strength in numbers to confuse potential predators, including humans, by flying or running in many directions when threatened.

“Camouflage, for instance, works well for many animals that are both predators and prey,” Liley said. “Reptiles may be best-known as the masters of camo, but it doesn’t end there. Bighorn sheep, pronghorns, many different types of birds and even fish use camouflage as a means to survive.”

Fish? They tend to be darker on top and lighter below, making it more difficult to see them from above.

“While javelina may have poor vision, they have a particularly acute sense of smell, not to mention a set of formidable canines,” Liley said. “Some wildlife, such as bighorn sheep, have exceptional vision and can detect potential danger from a distance.”

Even small mammals have defensive tactics

Squirrels are quick and exceptional climbers. Mice can get into spaces potential predators can’t. Pack rats build elaborate nests, a good deal of which likely will involve protective barriers of items such as cacti. At least half of a pack rat’s nest is built of edible items so they can remain barricaded for long periods of time.

Rabbits and hares may appear vulnerable, but they are adept at defending themselves.

“Sure, by most standards they’re cute and they certainly are a prey species, but they are far from defenseless,” Liley said.

Cottontails and jackrabbits (actually hares) have good senses of hearing and smell, and their nearly 360-degree sight picture makes it difficult to catch one by surprise. Jackrabbits also can hit top speeds close to 35 mph, pretty close to the top speed of a coyote. Cottontails avoid predators that hunt by sight by remaining perfectly still until danger passes.

Even mating behaviors can be considered defense for some animals. Cottontails and jackrabbits mate throughout the year and have large litters, helping the species survive.

“Fact is, most prey evolved with the predators on the landscape,” Liley said.

So why do pronghorns need to reach speeds close to 60 mph when there isn’t a North American predatory land animal capable of reaching the same speed?

That particular defense worked well against the American cheetah, which also reached those speeds but has long been extinct from the landscape.

Even newborn pronghorns, which might be considered defenseless, are born with no scent and lie low in the tall grass to avoid coyotes.

There is one species that, physically speaking, is more defenseless than most.

Take a look in the mirror

Compared with wildlife, humans don’t run particularly fast or see very well. Our sense of smell is pretty lousy and our hearing isn’t up to snuff. We are omnivores, but our bodies are designed like a carnivore, with our eyes set straight forward.

“This means, while humans can judge distance quite well, we can’t see potential danger lurking from behind,” Liley said.
What sets humans apart are brains and the abilities to walk upright and use tools.

Defenseless? Hardly, but perhaps more than we think. 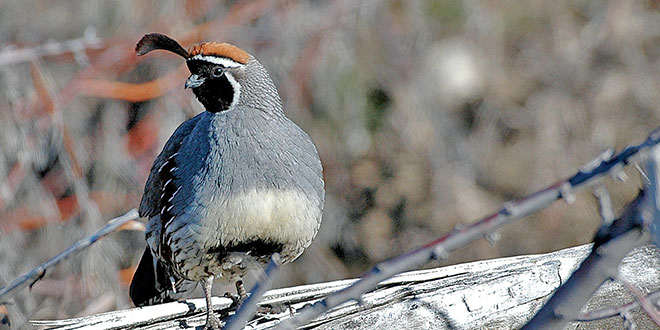 Above: While quail do serve as a prey species for many animals, they are far from defenseless. The are capable of short, quick bursts of flight and will scatter in many directions, which can confuse predators. NMDGF photo by Dan Williams.
Share