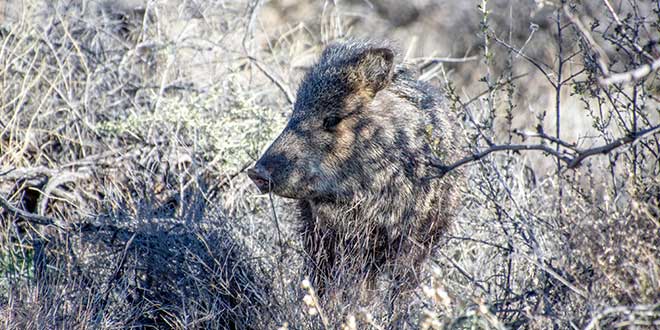 When Corporal Jake Baulch, New Mexico conservation officer, heard that the Ladder Ranch in Truth or Consequences was having javelina issues, he turned a problem into an opportunity for eleven young hunters from our state.

“The javelina were getting too accustomed to coming into our main housing area, and then an employee’s dog was injured,” Dustin Long, manager of the Ladder Ranch said.

Above: Javelina spotted at the Ladder Ranch. Below: Manuel and Felix Hernandez are Mixtecos, a tribe of indigenous people found in parts of Mexico. Felix painted his brother’s face before the hunt began, “to not only help him blend in better, but for our tradition as well,” he explained. Department photos by Jeremy Lane.

And who could blame them? The houses at Ladder Ranch sit in a valley that shelters wildlife from higher temperatures. Also, the Animas River runs through the property, providing water and green vegetation – an oasis in the desert.

Long recalled a particular upsetting incident when an employee encountered a javelina while walking her dog. “The javelina got defensive and attacked the dog,” he said. “The dog survived, but the inside of the employee’s car looked like a crime scene afterwards.”

“Normally, we might trap the javelina or consider euthanasia to reduce the herd size, but I thought it would be a good opportunity for a youth hunt,” Baulch said.

Baulch brought the idea up to Long, who was all for it. Plans were made for eleven kids to hunt.

Flyers went out, advertising the hunt, and 81 applicants submitted their forms.

“From there, we did a random drawing for the lucky eleven,” Baluch explained.

The hunting was split into two adjacent weekends in early February. Each young hunter was accompanied by an adult family member or friend. Before the hunt, all hunters also had to sight-in their rifles with conservation officers at a local shooting range on the morning of the first day of their hunt, to ensure firearms and scopes were ready. The officers also escorted and guided each group. 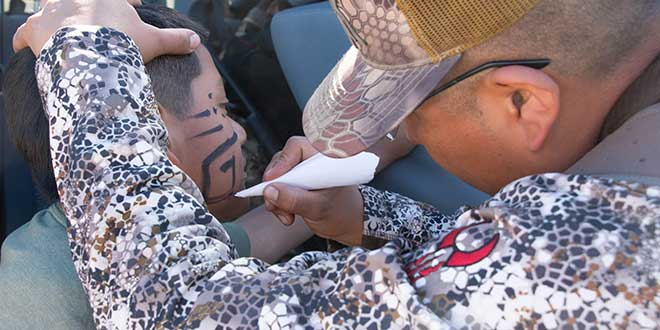 For Manuel Hernandez, age 11, of Dexter, N.M., this would be his first time hunting anything larger than rabbits. His older brother Felix, accompanied him on the hunt and welcomed the chance to share his love of the outdoors with family. Manuel and Felix are Mixtecos, a tribe of indigenous people found in parts of Mexico. Felix painted his brother’s face before the hunt began, “to not only help him blend in better, but for our tradition as well,” he explained.

Javelina were easily spotted during the first weekend of hunts, with everyone harvesting. The desired effects of that hunt on the property were seen in the second hunt, with javelina behaving warier of humans and not being found near the housing area.

The Hernandez brothers did eventually spot a small javelina group on a steep hill. The animals would travel in and out of open brush, presenting shots, but the young hunter was unable to capitalize. The javelina – perhaps catching wind of their pursuers – then holed-up in thick brush and refused to leave, so the decision was made to start up the hill toward them. The hunters were escorted by Officer Jake Morales who tried imitating a distress sound with a predator mouth call, but to no avail.

Now halfway up the steep hill, the hunters noticed movement below them. The group just had to laugh when they realized the javelina had traded places with them exactly, with the animals now being below in the shade and the hunting party scrambling for footing.

This angle was even better for a shot. Manuel took one shot and harvested what many at the event concurred was one of the larger javelina they had seen in recent memory.

“I had a fun time, and I’m glad my brother came with me,” Manuel said. “I want to hunt other things now. Maybe deer next.”

Long summed up the fun weekend in his welcome to the youth hunters during firearms check. “This is a win-win solution,” he said. “You’re helping by keeping the javelina population in-check, and we’re able to support future generations of New Mexico hunters.”