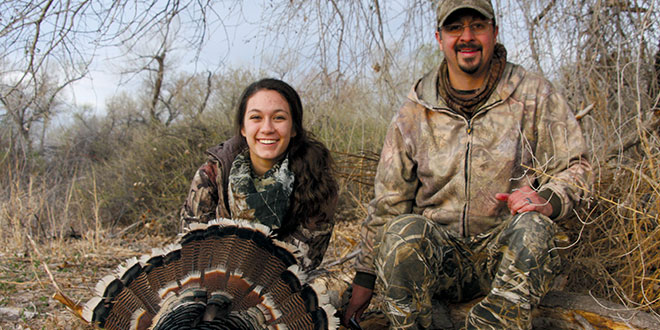 The art of the hunt… a daughter’s experience

You can hear the quiet — it’s that noticeable. Save for the silver tinkle of water trickling over an irrigation head gate on a small ditch several yards behind us, the pre-dawn dark is without sound, without motion. The stillness is as steady as the stars. I’m taken by the moment as night begins to melt into day this spring morning.

He’s an affable man, a New Mexico native. He came of age in Albuquerque, earned a forestry degree at Northern New Mexico Community College and then a degree in Wildlife Biology at New Mexico State University. He worked at refuges in Alaska and Oklahoma and then Bitter Lake National Wildlife Refuge in southeast New Mexico for nine years, before coming to Bosque del Apache, two years ago. All the refuges have waterfowl conservation in common, among other species.

Jeff has children of his own, younger than mine, but they will soon reach that joyous age where they can learn to hunt as Jeff did with his father and I did with mine. He owns passion for conservation and he’s a man eager to share his knowledge.

Willow is eager to absorb that knowledge. She turns 16 soon; clear-headed, an exceptional student and athlete—a state-qualified pole vaulter. Her 100-watt smile lights up a room. She passed the hunter education course several years ago and has hunted deer, quail, grouse and turkey before. After many years of trying, she drew a coveted turkey license at the refuge. The refuge grants by lottery only a handful of licenses each year to youth only. She would be the first child to try and harvest a wild turkey this spring.

A chill comes over us as it often does at first light, as we sit beneath a muscular Fremont cottonwood that stands along the edge of a rectangular field that’s flat as a pan. The gnarled tree bark is deeply furrowed like desert canyons. The lowest of its branches drape toward the ground, leafless still, but not for long. Its fat cigar-shaped buds swell with the hope of spring.

Less than a mile away, the Rio Grande courses by, its waters pulled off into ditches like the one that trickles behind us. These are old ditches—the water has been allocated for use by law for a good long time, centuries perhaps, dating to the Spanish colonial period. This ditch water will become wildlife habitat when it spills out into select areas managed to promote native vegetation, and mimic how river water naturally flowed overland. A whole litany of birds from the American Avocet to the Western Grebe will wade the waters.

Some species cease their northern migration here and nest, then head back south in fall. They will be supplanted by sandhill cranes and flocks of waterfowl that in masse throw shadows on the ground over the course of the winter. Bosque del Apache is renowned for its feeding of wintering water birds. But for the water, wildlife habitat, including that for wild turkey, would be far less plentiful.

The day begins anew as the eastern horizon takes on a glow that reminds me of the pulp of a blood orange. A few sooty clouds burn off and a breath of a breeze bends the husks of last year’s exhausted grasses and sunflowers.

And then we hear it. Across the expanse of the field, a turkey gobbles from a roost tree similar in shape and size to the tree we use for cover. In short order, the fresh light reveals two flocks of wild turkeys on the ground in the distance.

Jeff scratches out with a peg, a calm call of a hen on his “Willy Nelson slate,” as he calls it. He’s used it so much he’s worn a hole in it like the spruce-top of the singer’s guitar. He flaps his sweat-stained camo ball cap to mimic the sound of a bird flying off the roost, followed by whelps, clucks and purrs with a mouth call. It sounds convincing to my ears. Willow waits nervously but stock still as birds numbering in the tens inch toward what they think is other birds. They feed as they go along, with Jeff calling periodically.

Toms and jakes puff their chests and fan their tails. Coaxed ever closer to us, they strut and waddle with a symmetry like freight cars tip side to side on rails. The slightest movement or bogus call and it’s over. These birds are keen—genetically coded—to be aware of their vulnerabilities.

The ritual and the anticipation that started weeks ago build to this moment; Willow waits with her late granddad’s Winchester 12-gauge. She keeps her composure as birds come incredibly close. Amid many skeptical eyes she calmly raises the shotgun and pauses, waiting for the cleanest, surest shot. The safety clicks. The dull thud kicks her wiry frame and the bird falls like a sack. She outwits the wiliest of creatures and is elated. She marvels over the whole event and the bird she killed.

Science and poetry coincide. But not for conservation, this occasion would not exist. I’m guilty of nostalgia and filled with a sacred sense of possession. Hunting is a paradox, and no one knows that more than a hunter. What may end in death is at the same time life-affirming. Conservationist Aldo Leopold said that hunting revives something that was formerly inherent in our daily lives.

“There are two spiritual dangers in not owning a farm,” he wrote. “One is the danger of supposing that breakfast comes from the grocery, and the other, that heat comes from the furnace.”