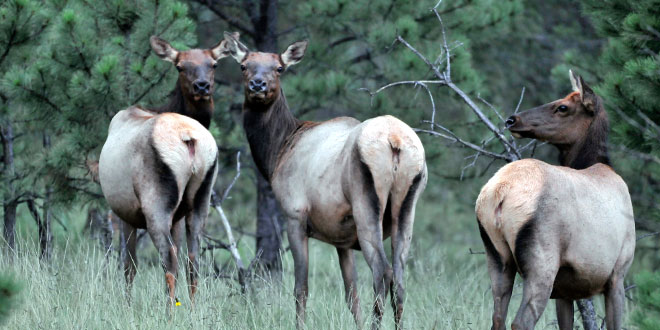 As the saying goes: Sometimes fact is stranger than fiction. This is the category under which my personal hunting exploits would lie.

Seeing wildlife is always an exciting experience, but it can become frustrating when the animal a person is looking for can’t be found. While on a cow elk hunt, with the camera left behind, javelina, deer, and pronghorn antelope were all happy to make an appearance, but the elk remained elusive. NMDGF photo by Dan Williams.

It was October 2008 and I was on a cow elk hunt. The weather couldn’t have been nicer. The mornings were pleasantly cool with the afternoons requiring little more than a sweatshirt.

A friend came along to help navigate through unfamiliar territory.

Heading in, things looked promising as an entire herd of pronghorn walked across the dirt road directly in front of the pickup.

But, of course, I was on an elk hunt and seeing a herd of pronghorn, while nice, wasn’t going to put dinner on the table.
While trying to find an area with a bit less hunting pressure, an entire herd of deer walked in front of the pickup. They were kind enough to stop, look back, and virtually pose.

But, of course, I was on an elk hunt.

We searched, glassed, and spoke to other hunters, but came up empty in the early stages of the hunt. Yes, it is enjoyable to see wildlife and, while I am often more focused on photography, I’d payed for an elk hunt, not a photography expedition.
Later in the hunt we found what seemed to be a great location at the top of a plateau to glass for elk. Strange, I thought, that I could see miles without so much as a hint of an elk.

Dusk approached and the day was nearing its end. It was at this time I began to wonder about this odd, nearby, snorting sound.

The sounds grew louder and louder until I finally noticed a number of javelina no more than 10 feet away.

But, of course, I was on an elk hunt.

Frustration began to set in. We had seen nearly every big-game animal the area had to offer, except for elk.

The hunt was nearing its end when we once again set out in the morning and saw nothing.

On the way out it finally happened. A cow and bull in the distance. I positioned myself for a potential shot. She was in my sights, but I hesitated a moment. It was then the bull moved into a position that made taking a shot risky.

They disappeared over a ridge and I followed, but both were gone and the hunt was over.

So, there it is, the story of my failed cow elk hunt.

Maybe a camera would have been a better choice than a firearm after all. At least then I’d have returned with something to show for the days in the field and the mud on my face.

Who knows, maybe one day I’ll work up the nerve to share the story of my quail hunt.

Spoiler alert: I returned home on crutches without a quail in the bag.