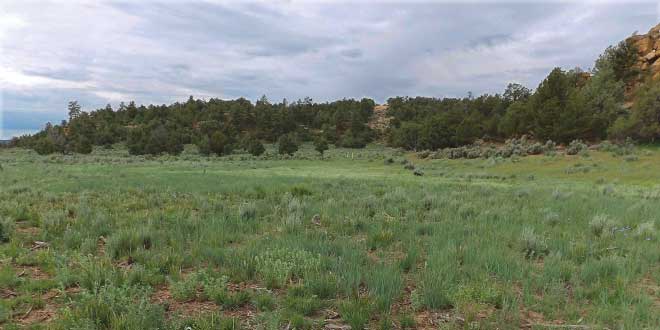 Because Wildlife Depends on it . . .

All outdoor enthusiasts love to see a lot of wildlife, whether it’s a hunter, hiker or photographer. Habitat improvements are implemented all over the world to benefit wildlife. New Mexico is no exception. These improvements not only play a pivotal role in refining conditions for wildlife; they also provide additional hunting and angling opportunities as well as increased wildlife viewing opportunities.
Without these improvements, wildlife habitat quickly vanish and take years to recover.

“Habitat improvements are one of the most important things we can do when it comes to wildlife management,” says Chuck Schultz, Northwest Area Regional Habitat Biologist for the New Mexico Department of Game and Fish.

Habitat improvements can be as basic as a planting a variety of feed crops on a farm for waterfowl, to something more intensive such as a 1,000-acre tree thinning project to benefit deer and elk.

Most habitat improvement projects on state land take a long time for a government agency to complete? due to processes like the National Environmental Policy Act (NEPA). In these cases, the proposed project/improvement is first sent through a coordination and analysis stage. Once it is determined that there may, or may not, be a significant impact, the proposal is then subject to further scrutiny, through the final planning process.

The far northwest corner of the state, near Farmington, has become a focal point for habitat projects due to the large amount of public land and the number and sheer quality of deer that call it home. Not only does this area have a healthy resident deer population, it also doubles as an important wintering area for hundreds of deer that migrate into New Mexico from Colorado during the winter months.

“Habitat improvements have done and continue to do great things for the deer and elk in the area,” said Michael Clifton, an avid hunter and outdoorsman.

During a recent deer hunt on Crowe Mesa, Clifton witnessed just how much wildlife relies on the recently completed habitat improvement project. The areas that had been cleared of juniper and reseeded with bitter brush were like wildlife magnets.

“Habitat improvement projects like these are a win-win for both New Mexico wildlife and New Mexico hunters,” said Clifton.

There are currently several ongoing long-term projects that have been implemented on Bureau of Land Management (BLM) and U.S. Forest Service (USFS) lands and come with multi-year funding. These projects are in addition to other habitat improvements that are continually being implemented and completed on New Mexico Game Commission-owned wildlife management areas tand farms.

The department and other partners are involved in several large, multi-year restoration projects in the Northwest quadrant of the state. Major collaborative project areas include: Mertz Ranch and Chivato Mesa on BLM property; Bluewater, Puerco, and Black Mesa landscapes on the Cibola National Forest; and Ojito Mesa and Chaparral project areas on the Santa Fe National Forest.

In addition, the department is engaged in restoration on Game Commission-owned properties such as the Edward Sargent and Rio Chama Wildlife Management Areas. Through selective thinning contracts and prescribed fire operations, these projects strive to return low intensity fire to tens of thousands of acres of fire adapted vegetation communities. Wildlife that use ponderosa pine forests, pinon/juniper woodlands, and grassland habitats should benefit.

Many of these large-scale projects are “phased,” meaning that as money is available, the environmental compliance is completed and weather conditions are agreeable, the project will proceed in blocks, from several hundred-to-several thousand acres at a time.