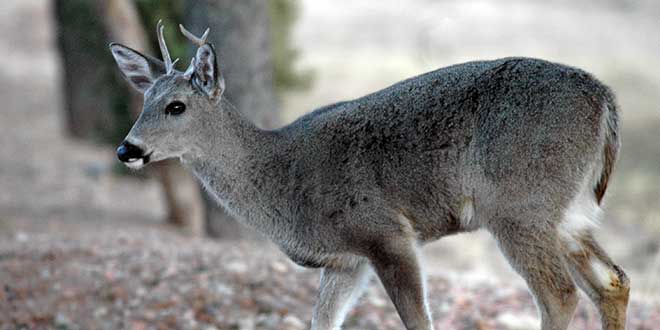 “Grayish brown and furry” could describe a lot of different wildlife in New Mexico. Even to a trained eye, a fleeting glimpse of a species might lead to an unclear identification because many of New Mexico’s wildlife have lookalikes, a separate species for which it may be confused. However, a closer look reveals key differences that can help you know your wildlife better.

If narrowed down to deer, for example, a person could still be describing any one of three different deer in the state: white-tailed deer, mule deer and Coues deer.

Banner: Coues deer are a small white-tailed deer subspecies. Below: Mule deer may have a darker fur “mask” between the eyes, and a lot of white can be seen on their rumps. 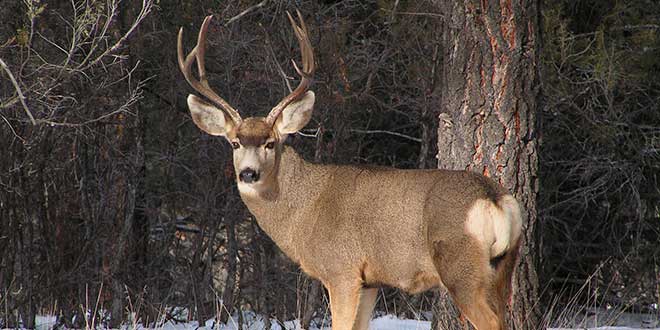 White-tailed deer are so-named because of their wide, white tail that is held upright when the deer is startled. But most of the time, you’ll see mostly brown fur on the rump of a white-tail because the larger tail is brown on top and covers this warning signal when “not in use.” On mule deer, more white is seen on the rump. Their tail is much smaller and come in a range of colors.

Moving to the other end of the body, mule deer get their name from their large ears, resembling a mule. In the majority of animals, mule deer ears will be significantly larger than a white-tail’s.

Muleys also often have a “mask” of dark fur between their eyes and on their forehead, but keeping things tricky, this mask isn’t always prominent.

Coues deer are a subspecies of the white-tailed deer and share many of their characteristics, but on an animal that’s smaller overall. Coues deer will often have larger ears than what some people may be used to seeing, especially on eastern white-tail. These larger ears are a result of their environment – the arid southwest – and come in handy to dissipate heat. Coues also tend to be more slate grey, earning them the moniker “grey ghost,” as they uncannily disappear into their habitat.

“A large ram-looking animal with big, curved horns” is another phrase that could describe a couple of different game species.

Barbary sheep were introduced to the state from their native northern Africa in the 1950s, but they could potentially be confused (as was the case fairly recently by an unfortunate hunter) for our native desert bighorn sheep.

Below: Desert bighorn sheep have a white muzzle and rump patch. 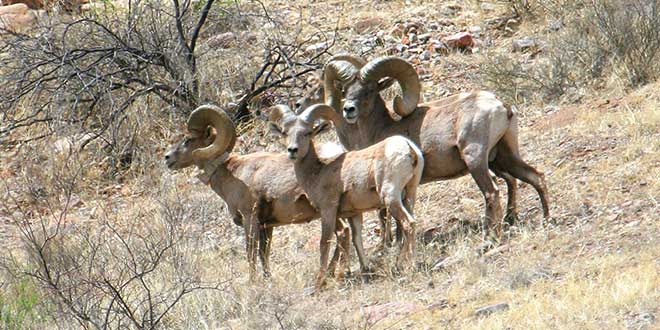 These African transplants have long, shaggy hair down their chests and on their front legs. Desert bighorn lack this long hair.

Bighorns have a white patch on their muzzle and rump that Barbary sheep are missing. When young, male desert bighorn sheep may possess crescent-shaped horns more closely resembling Barbary sheep than the curled horns of adults of their species.

So, you see, knowing animal differences isn’t just a pedantic exercise; it could save you a citation.

And smaller animals can pose some confusion too.

In our state, we have two species of jackrabbit and three species of cottontail. Without getting too in-depth into all five species, jackrabbits have longer ears, bigger feet and are a larger animal overall. Cottontails have a namesake, fluffy, white tail. The differences go beyond mere appearances for these two also. Jackrabbits are hares (instead of rabbits) and their young are born precocial. From birth, their eyes are open, they’re covered in hair and can move around. Cottontails are true rabbits and their young are altricial. Their young are born hairless with eyes shut, and they’re very dependent upon mom.

Inset: Barbary sheep have long hair on the chest and front legs. 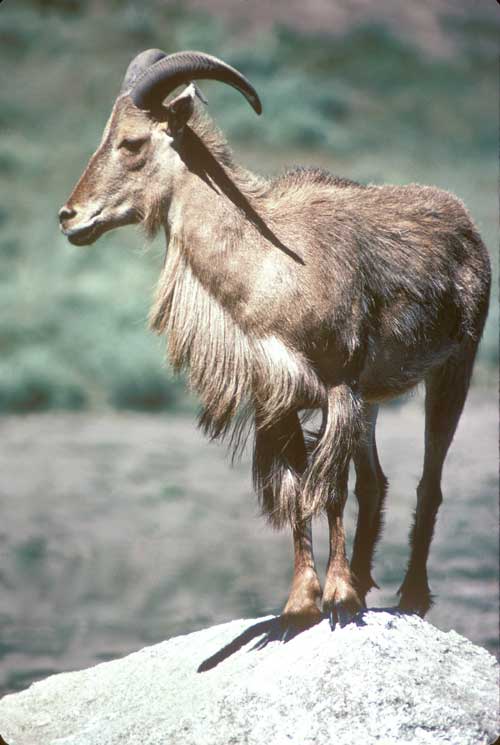 It comes down to familiarity with the subject matter, doesn’t it? A mother of identical twins has no problem telling her children apart, but they may be indistinguishable to a stranger. Sure, “sparrows all look alike” when you start birding, but the more of them you see, the more you pick up on characteristics that will have you differentiating lookalikes like a pro in no time.