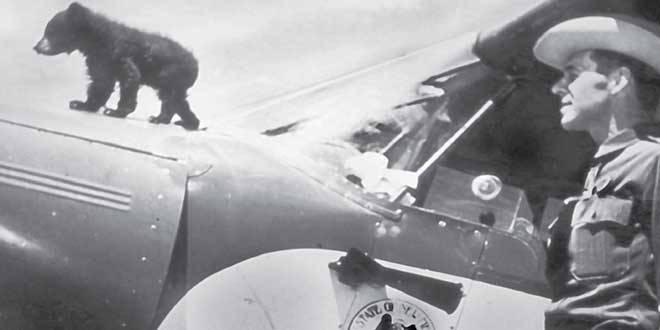 Like many New Mexico Department of Game and Fish personnel before me, I have always been proud to wear the insignia of the Department. And while the exact style of the emblem has changed through the years, the concept has remained the same – a circle-shaped outline with the name of the Department curved around the inner edge and the majestic head of a black bear in the middle.

I have often wondered about the origins of “the bear head.” I have heard a story told many times that this black bear represents Smokey Bear. At first glance, this story may sound plausible. After all, it was New Mexico Department of Game and Fish that, in 1950, flew the young orphaned cub to Santa Fe from the Capitan Mountains to treat its wounds after a wildfire, and later offered the cub to the U.S. Forest Service for its conservation and wildfire prevention campaign. However, in one of the most iconic pictures of Smokey Bear, the newly-found cub is standing on the Department plane and there on the fuselage is the Department insignia with that well-known black bear face. So, this particular black bear is obviously even older than the famous Smokey Bear. 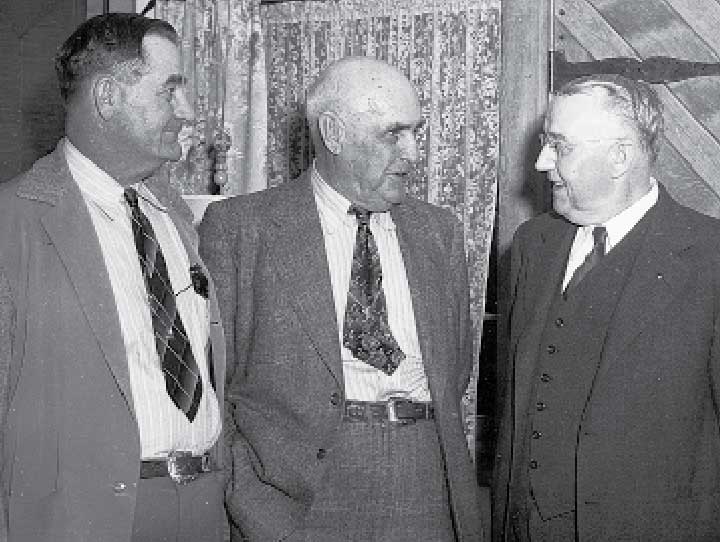 Above: Elliot Barker, Judge Colin Neblett and R. B. Coombs.

To get the full origin story of the bear head we must travel back to 1914 when an artist named William Herbert “Buck” Dunton moved to Taos. A founder of the Taos Society of Artists, Dunton became well known for his paintings of the American southwest. Today, his paintings can be found in museums across the country, with many of his works having estimated values in the $250,000 to $500,000 range. In addition to being a renowned artist, Dunton was an avid outdoorsman. He had grown up exploring the Maine woods and, since moving to Taos in 1914, was a hunting companion of Elliot S. Barker, the future director of the New Mexico Department of Game and Fish.

Barker became director of the Department on April 1, 1931 and in August of 1935 he attended a meeting of the State Game Commission where one of the agenda items was “the law…that each state car must have an insignia on it…designating to which department it belongs.”

Barker did not come to this meeting ill prepared, having with him several sketches of insignia ideas from his old friend and hunting partner “Buck” Dunton.

Banner: A newly-found Smokey Bear on the Department plane. Note “the bear head” insignia on the fuselage. Below: Elliot Barker poses by the Elliot S. Barker WMA sign sporting the Department logo.

The Commission agreed to pay Dunton the grand total of $100 to create the insignia and then set out on the task of deciding which image to use. Dunton’s original sketches had included various wildlife including deer and trout. Barker was directed to further consult Mr. Dunton on additional ideas and the matter would be discussed further at the October meeting.

The chairman of the Commission, a lawyer from Virginia who had opened up shop in the New Mexico Territory in Silver City in 1898, served as a New Mexico district judge from 1912 to 1916 and was appointed as a federal judge February 5, 1917, was Judge Colin Neblett. Neblett had been a member of the New Mexico Game Protection Association, a forerunner to today’s New Mexico Wildlife Federation, and had previously pushed to have the black bear included in state law as a protected species. While the listing of the black bear as a protected species with controlled hunting did occur, it wasn’t until 1927, a mere eight years prior to this insignia discussion. 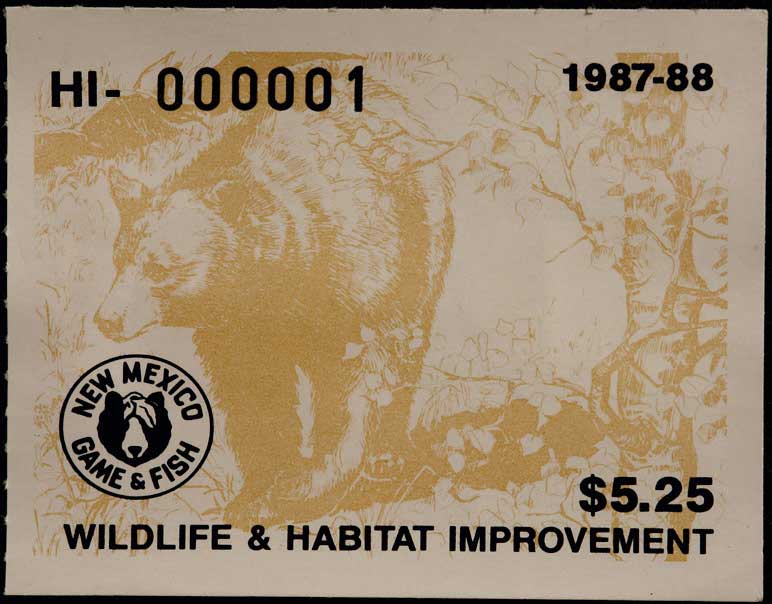 Above: The 1987–1988 Wildlife and Habitat Improvement Stamp featured a black bear and displayed the Department insignia. .

Perhaps the newly protected status of the black bear was on the minds of the commissioners as they made their final decision in December 1935. The minutes read, “It was finally decided that the black bear should be used as an insignia for the Game Department cars” and Dunton went to work on finalizing the image. “Mr. Dunton designed a handsome head of the black bear…with a light muzzle…against a white background, the full-face view of the massive head stood out impressively…surrounded by the legend…Dept. of Game and Fish.”

Since that time, “the bear head” logo has been proudly displayed on Department vehicles, clothing, publications and an endless list of other objects. The year 2020 marks the 85th anniversary of the creation of this Department insignia. It is amazing to me to think of the New Mexico heritage and history that this image represents and all of the hundreds of men and women who have worn this insignia through the decades.