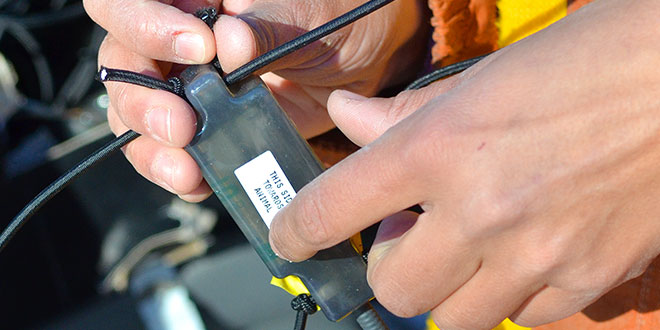 The importance of telemetry in wildlife conservation

Wildlife tracking has been around for centuries, but most of the time it had little to do with research.

More than 500 years ago, falconers in Europe were known to place leg bands on their birds as a sign of ownership, but it wasn’t a big leap to go from banding to define ownership, to banding for research.

Above: Tracking devices exist that can aid in the research of birds, mammals, fish, insects and arachnids, but with each different species come separate challenges. This backpack-style transmitter works well with wild turkeys. NMDGF photo by Zen Mocarski

In North America, John Audubon’s desire to understand the behavior of birds would alter the course of wildlife research forever. He banded a few phoebes near Philadelphia in the early 19th century, making the birds easily identifiable when they returned to the same nesting site the next year.

Advances in technology broadened the possibilities, and by the 1960s VHF tracking devices allowed researchers to delve deeper in their studies of wildlife behavior.

These devices require a user to acquire transmissions from a device attached to an animal using an antenna, either carried in hand or attached to a vehicle or aircraft. Although similar, GPS devices are capable of providing precise information either stored on a collar and collected when it drops off an animal or transmitted to a satellite that emails the user. GPS collars can be cost prohibitive.

“Not only does the information collected help biologists locate and track wildlife, but the data gathered also can provide wildlife officials with information about migratory routes, the types of habitats a particular species likes and causes of mortality,” said Bill Taylor, northwest region wildlife biologist for the New Mexico Department of Game and Fish.

With low calf survival, a number of newborn elk in the Mount Taylor herd were fitted with ear-tag VHF transmitters in 2015 and 2016.

Biologists will analyze the information to determine why the survival rates have been low. Possible causes could range from a high density of predators, calves being born in poor condition, disease or other factors.
“Not one, but all of these factors play important roles in the management of wildlife,” said Chuck Schultz, northwest region habitat biologist for Game and Fish. “It’s crucial to pay attention to all possibilities when making decisions on management of wildlife.”

The potential uses for transmitters are not limited to documenting factors for low survival rates. VHF transmitting devices are used on many species of wildlife, ranging from those that fly to those that swim.
“There are transmitters used for birds, mammals, fish, insects and arachnids,” said Nicole Quintana, big game manager for Game and Fish. “The type and size of a transmitter will vary depending on the species and the reason for its use.”

Telemetry makes it possible to document survival, migration patterns, timing and locations of birth, food habits and seasonal landscape use. Some states have used the technology to study migration routes across roadways.

“Wildlife management doesn’t end with knowing the population size of a specific species,” Quintana said. “Tracking movement of the different species improves the ability of biologists to mitigate problems and guide resources where they would be most beneficial.”

Collars have been vital in developing an understanding of pronghorn antelope behavior, which has led to fence modification projects because pronghorn prefer to go under, rather than over, fences.

The work isn’t easy and at times can put those in the field in harm’s way.

“Wildlife doesn’t know you’re trying to help, so they’re going to fight,” Quintana said. “Dedicated biologists and conservation officers in the department and other agencies work diligently to make on-the-ground conservation a reality.”

Hunters play a vital role as well, providing the funding source for conservation work. However, collared animals are not off-limits during the legal hunting season.

“Because each collar is identifiable, a harvested animal with a collar provides information about where it has travelled if the batteries are no longer functioning,” Schultz said. “This is a primary reason biologists encourage hunters to return these collars to the department.

“Many transmitters aren’t cheap and some of them can be refurbished and used again for less money than buying a new one.”

“Harvesting an animal with a tracking device is a frequent question asked of department personnel,” Quintana said. “People are either afraid they’ve done something wrong or they passed up a collared animal thinking it wasn’t legal. In fact, we would like hunters to treat animals with transmitters just like any other animal.

“If they would typically harvest that animal, then they should do so. It helps us learn how much hunting plays a role in the population management and is useful in making management recommendations that could include expanding hunting opportunities.”