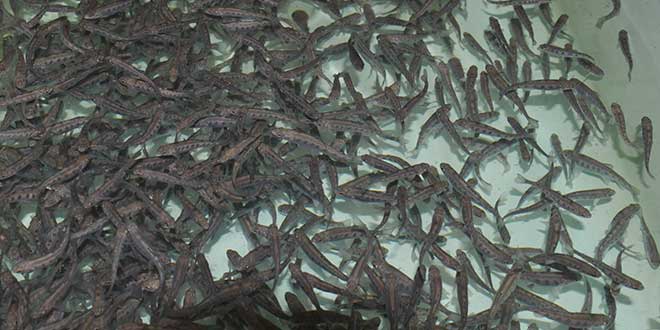 Where Do All Those Fish Come From?

The smile on a young child holding a shimmering rainbow trout, the first fish she has ever caught, while on a summer outing with her family; the weekend fly fisherman watching the deep pools and currents for that Rio Grande Cutthroat trout to strike the fly he skillfully cast out; or the bass fisherman pitching out a rig to some wooded cover in search of a big lunker — these are just some of the amazing fishing stories that you could have fishing in New Mexico. Besides just the pure joy, these stories also have one other thing in common — fish hatcheries. New Mexico has a proud and important heritage that goes back 100 years ago for growing fish to stock in rivers and lakes in New Mexico. 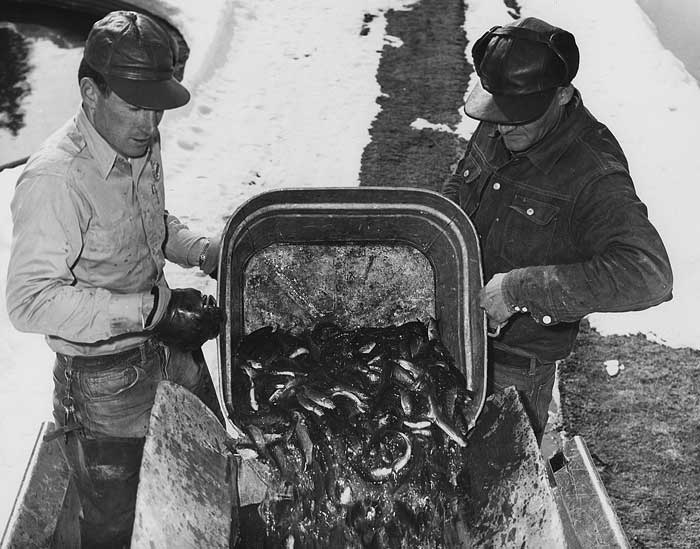 It was 1921 when the first state fish hatchery, Lisboa Springs Hatchery, was built just north of the small town of Pecos, New Mexico. New Mexico had been growing in population for many years, and with the influx of new people arriving, there was a need to supplement fish in New Mexico waters. Before the first hatchery was built, fish were brought in by train, likely from Colorado. However, with the new fish hatchery and its production, the New Mexico Department of Game and Fish could be self-reliant on raising its own fish. According to Roddy Gallegos, the Assistant Chief of Fisheries in charge of hatchery operations, “The first fish were referred to as black-spotted trout, which the Department believes was the Rio Grande Cutthroat trout.”

Fast forward to today, there are now six state hatcheries spread out across the state producing multitudes of fish, including the Rio Grande Cutthroat trout (the state fish of New Mexico), rainbow trout, kokanee salmon, Gila trout, largemouth bass and walleye. With a massive jump in production since 1921 and with sophisticated stocking trucks, hatchery personnel are able to put out substantial numbers of fish each month. For rainbow trout alone, a single hatchery can stock up to 50,000 catchable-size rainbow trout each month during the fishing season. A number that would have been impossible in days past with only one hatchery and limited transportation options.

Below: Fish coming out of the stocking truck, Department photo by Ross Morgan. 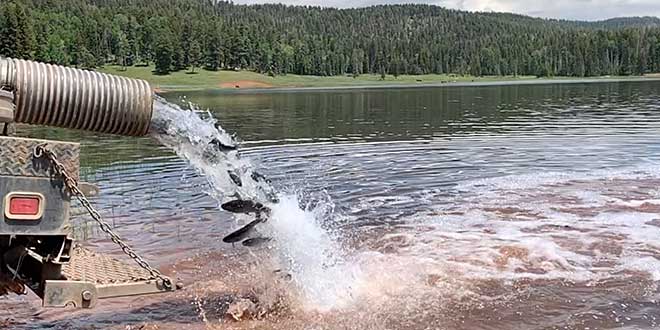 At almost all of the state hatcheries in New Mexico, their primary responsibility is raising rainbow trout. These trout are bred and raised as all triploid females, meaning they can’t reproduce. This innovative solution was an important milestone in hatchery operations, thereby protecting wild native New Mexico fish from losing genetic purity due to hybridization with rainbow trout.

Another exciting endeavor in hatchery operations is the effort a few of our hatcheries are putting towards the production of our state’s two native trout, the Rio Grande Cutthroat trout and the Gila trout. Seven Springs Hatchery near Fenton Lake in northern New Mexico exclusively has been raising Rio Grande Cutthroat trout from wild eggs collected by Department fisheries biologists since 2002. These fish help supplement existing populations in recovery and recreational areas. About 75% of the fish are stocked as fry or fingerlings, and the remaining 25% are kept as replacement broodstock and ultimately stocked into recreational waters for anglers. Lisboa Springs and Red River Hatcheries are also looking into raising Rio Grande Cutthroat trout stocks to add angling opportunities in the state.

This year, Glenwood Hatchery in Southwest New Mexico is shifting gears from raising rainbow trout. After a few renovations, it will exclusively raise Gila trout, which will provide anglers additional opportunities to try their hand at catching another native New Mexico trout.

Besides just trout, two state hatcheries are also in charge of raising some other favorites species anglers in New Mexico like to catch.

The Los Ojos Hatchery near Chama is in charge of raising kokanee salmon. These salmon are raised from the wild eggs collected by hatchery staff with assistance from fisheries biologists each year in the New Mexico lakes these salmon now call home.

The Department also has one hatchery that produces cold water and warm water fish, Rock Lake Hatchery. There they raise rainbow trout, a cold-water fish, as well as largemouth bass and walleye that are raised from wild eggs. In the past, Rock Lake Hatchery has also grown and stocked tiger muskie, bluegill and channel catfish.

Hatcheries are funded by you, the angler. Each time you buy a fishing license, that money is used for projects such as hatchery operations. Every time you buy a new reel or new fishing tackle, an excise tax on those items is put into a nationwide fund to help support fish and wildlife agencies so they can provide fishing opportunities. As such, the primary responsibility for our hatcheries is to produce recreational opportunities for you to fish throughout New Mexico, as well as the chance to bring home a nice meal.

Running a hatchery is no small task. The Department employs over 40 full-time employees to manage the day-to-day operations of monitoring fish health, cleaning raceways, maintaining inventory, raising wild stock from eggs and stocking New Mexico waters. You have likely seen a hatchery professional opening up the back of their truck to allow thousands of fish to spill out into a lake or dipping a net in the holding tank and walking a net full to a small creek.

Below: Stocking a New Mexico water with trout, New Mexico Department of Game and Fish. 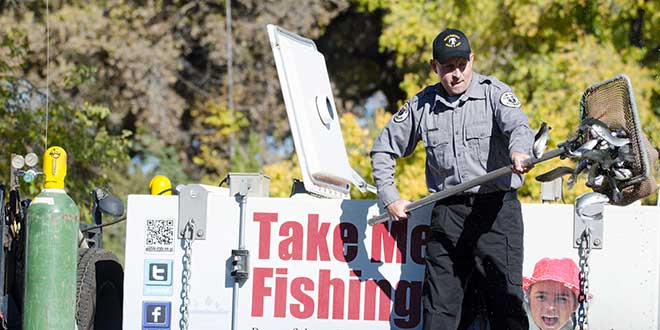 The Department hatchery system has come a long way since its humble beginnings at Lisboa Springs to our six hatcheries’ current fish production. The thousands of fish stocked each year are all part of providing New Mexico residents and visitors a chance to fish, have a great meal and spend a day outdoors in our beautiful state.

Learn more about the hatchery program in a podcast interview with Roddy Gallegos here.