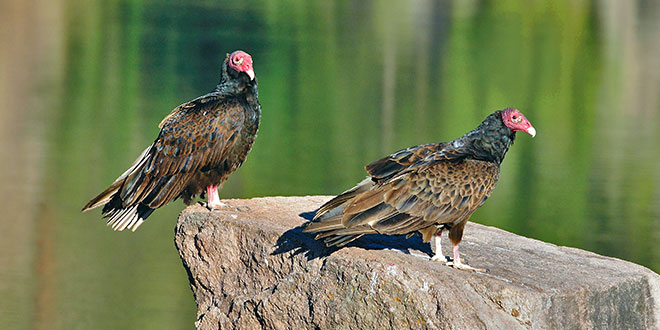 Many people refer to this bird as a buzzard, which is incorrect.

The term buzzard in the United States probably is the result of old western movies, but buzzard, in Europe, refers to a member of the buteo, or hawk family.

Above: A pair of turkey vultures rest on a rock at Lake Roberts. With a wingspan of 5 to 6 feet, they are the second-largest bird species in New Mexico, next to eagles. NMDGF photo by Dan Williams.

The turkey vulture’s diet consists almost entirely of carrion. Its scientific name, Catharetes aura, translates to “golden purifier,” which seems fitting for a bird that spends a good deal of time cleaning the desert free of charge.

This is important for humans,” said Peggy Darr, nongame avian biologist with the New Mexico Department of Game and Fish. “Turkey vultures are disposing of dead things that could otherwise become a breeding ground for disease.”

But, the vultures aren’t without standards, preferring relatively fresh meat.

“Unlike most members of the avian world, turkey vultures have an excellent sense of smell to go along with a good sense of sight,” Darr said. “They can find a dead animal without actually seeing it.”

That is an important adaptation because turkey vultures are not designed to be effective at hunting live animals.

“Their feet are flat and weak and not well-designed for grasping,” Darr said. “Unlike the strong talons many raptors possess for grasping prey – such as hawks and eagles – the turkey vulture has blunt talons that aren’t made for holding their quarry.”

Many people have likely seen this bird along roadsides cleaning up messes left behind after a wildlife-vehicle collision. That’s just one reason this bird is a common sight throughout New Mexico, especially from late spring until mid-autumn.

Although many wildlife populations have been negatively impacted by humans, the vehicle collisions may help explain why the turkey vulture population has been on the rise since the 1960s: an abundant, easy-to-locate food supply.

The underside of a turkey vulture’s wings is silver and they form a noticeable V shape when in flight. Unlike most bird species, a turkey vulture has a keen sense of smell and can locate a potential food source before it is seen. NMDGF photo by Zen Mocarski.

At times they can be seen soaring above, catching thermals and rising high above the ground. Even at higher altitudes they are easily identified because turkey vultures appear rather awkward in flight, often wobbling side-to-side and rarely flapping their wings. The underside of the wings is silver and there’s a noticeable V-shaped look to the wings when in flight.

The other identifying trait turkey vultures possess is their size. Outside of eagles, this is the largest bird a person will find in New Mexico, with a wingspan of 5 to 6 feet and an overall length over 2 feet.

Among the most common sightings is this bird perched with its wings spread wide. The assumption that a turkey vulture does this as a way to warm up in the morning sun is correct, but there is another reason.

“It has to do with a turkey vulture’s diet,” Darr said. “The ultraviolet light from the sun burns off bacteria after eating and standing on dead animals.”

Maybe that sounds a little gross, but it isn’t nearly as bad as its method of cooling. To do that, turkey vultures will urinate on their legs and feet, which cools the blood vessels.

Then there’s this: Their primary defense against would-be predators is to vomit.

“If threatened,” Darr said, “the primary defense of a turkey vulture is to regurgitate an extremely foul-smelling, somewhat digested, batch of meat.”

Even a skunk would be envious of the odor, which is pungent enough to drive most predators from a nest and, if caught feasting on the ground, provide time to escape. Releasing its most recent meal also reduces the load, allowing the vulture to take flight a bit more quickly.