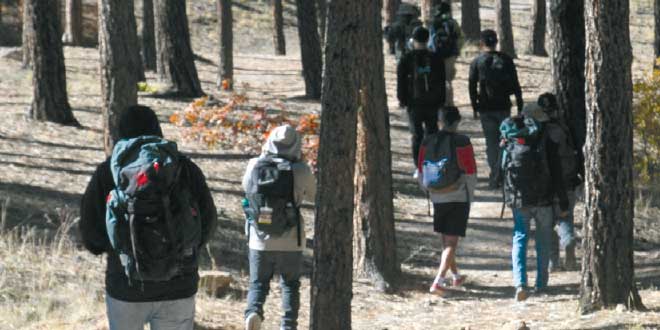 Trout in a Tote

It’s a stocking technique utilized by fisheries biologists to release fish in wilderness and other hard-to-reach streams where more conventional stocking methods are not possible. A tanker truck, full of wild-caught fish from a healthy population, is driven as close as possible to the nearest access point. In our case it is a trailhead that is the start of a several mile hike down to the Rito de Los Frijoles below. The fish will have to be backpacked to their new home from here.

The cutthroats are removed from the tanker truck with nets and are placed in large plastic bags filled with water. As biologists bag the fish, a Passive Integrated Transponder, or PIT, tag reader is used to scan a ‘barcode’ that provides a unique identification number for that tag. The tags are small electronic microchips enclosed in biocompatible glass that were previously inserted under the fish’s skin. Automated PIT tag readers can be placed along different stretches of the stream that will log these identification numbers when the fish swim over the monitoring systems. These systems can provide valuable information to biologists on the released fish’s survival and movements.

Now that the fish are in the bags, a hose is inserted to add oxygen and the bags are clamped shut. The extra oxygen helps the fish remain healthy on the hike in to their new habitat. The bags are gently placed in the backpacks of Department staff and volunteers and the hike begins.

On this particular outing, Department biologists and the National Park Service are joined by dozens of volunteers from Trout Unlimited and Santa Fe Indian School. Each person packs several Rio Grande cutthroat trout down into a rugged canyon on Bandelier National Monument. As we hike down the canyon, Brauer explains the uniqueness of the situation that allowed cutthroats to be stocked here. This area was burned as part of the Las Conchas Fire in 2011, which resulted in a total loss of fish and a reduction in fish habitat. However, after several years of recovery, this empty fishery created the perfect opportunity for the restocking of native Rio Grande cutthroat trout without the risk of competition from non-native trout species.

Banner: Volunteers hike bags of fish to the river. Below: Biologists prepare a bag of trout for a volunteer. Next: Volunteers release trout into the Rito de Los Frijoles. Department photos by James Pitman. 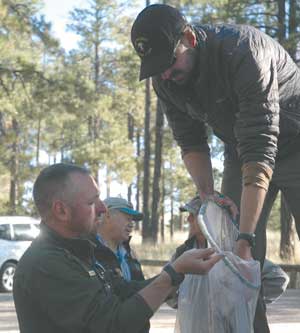 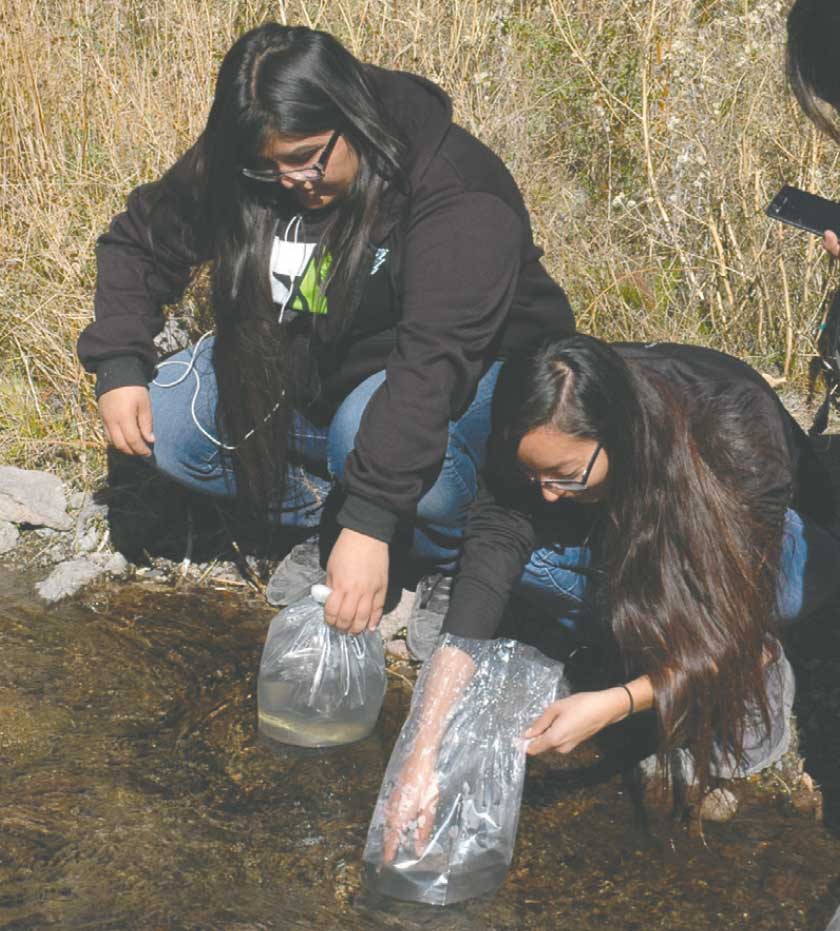 When we finally reach Los Frijoles, the bags are removed from the backpacks and the fish are inspected. All the fish made the hike just fine. The bags are placed in the edge of the stream to allow the fish to become accustomed to the temperature change in the cool running water. After about 15 minutes, the bags are opened and the fish are released by hand in their new homes. This is the second backpack-stocking of cutthroats since the Las Conchas Fire, with the initial stocking occurring in 2018. Due to the efforts of biologists, and with the assistance of volunteers, Rio Grande cutthroat trout swim once more in a place where their ancestors swam hundreds of years ago. And I can now say I have seen trout swimming in a tote!