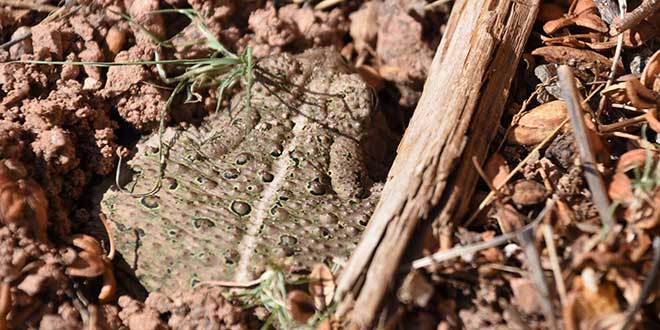 It’s monsoon season and the onset of rain breathes life into the desert Southwest again. Plants bloom, wildlife baby season is in full gear and many animals are in their activity peaks for the year.

One group of animals that might exemplify how monsoonal rains revive this harsh landscape is the homely, oft-unappreciated toad.

Banner: A partially-buried Woodhouse’s toad is either is the process of emerging or burying itself again.

Toads are amphibians that begin their lives as eggs laid in the water. Tadpoles then hatch and are aquatic larvae for some time before external gills are absorbed, legs are sprouted and toadlets take to land.

This life history is shared with frogs (another amphibian), but a few characteristics differentiate the two:

There are two similar amphibian taxonomic families represented in New Mexico that might both be referred to as “toads”: Bufonidae (the true toads) and Pelobatidae (our spadefoots). 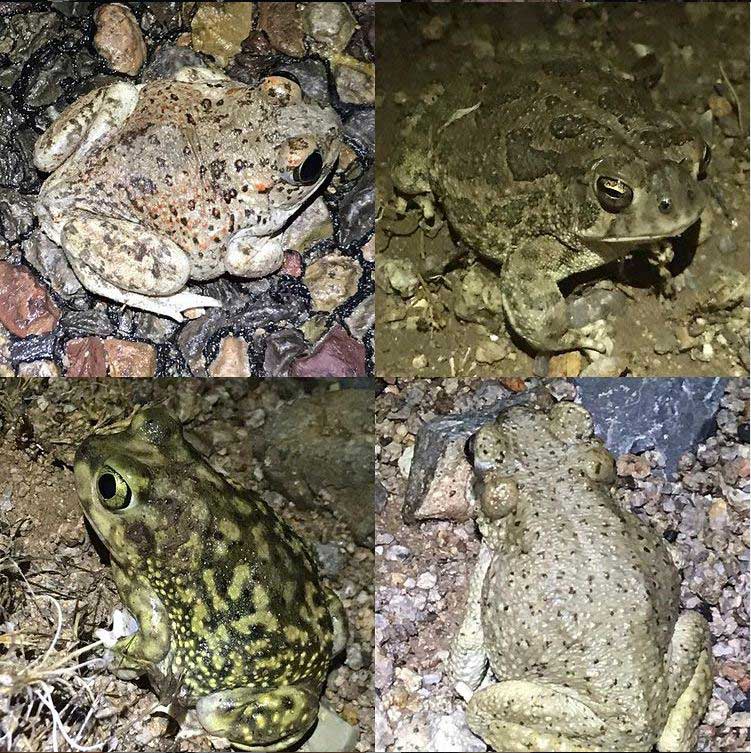 Above: Starting top left and working clockwise: New Mexico spadefoot, Great Plains toad, red-spotted toad, Couch’s spadefoot – all found by the author on one rainy evening in about an hour.

‘Spadefoots lack the paratoid glands true toads possess. All our spadefoot species (Couch’s spadefoot, plains spadefoot and New Mexico spadefoot) also have vertical slits for pupils like a cat’s, instead of the horizontal ones present in toads. So, though they might frequently receive the “toad” moniker, they should more appropriately be referred to as spadefoots, referring to the keratinized “spade” on the bottoms of the hind feet that aid in digging.

Toads can be active for much of the warmer months and survive dry spells by burrowing underground and waiting for rains. Spadefoots are dormant underground at depths of 5-10 feet until rains “awaken” them, which could be mean they’re underground for years at a time. They surface only to eat and to breed and they bury themselves again soon afterward.

When they first emerge from hiding, toads may be dehydrated, but most terrestrial amphibians do not drink water by mouth; they absorb it across their skin. Our true toads have a special area of belly skin called the “seat patch” that may be responsible for up to 70% of the animal’s water intake.

When they sense warmer temperatures and an increase in humidity and moisture, toads (and spadefoots) are easily observable. Just venture near a ditch, pond or other still catchment when it’s raining or has recently rained and you might hear toad calls.

The calling is performed by males to attract females and is specific to a species. Several different species might share the same water source, often creating a cacophony of sounds resembling sheep bleats, snoring and monotone trills. Their focus on mating will sometimes allow you to approach and observe them as they call, if you move slowly enough and give them enough space. Sometimes during these mass breeding events, a male with grab onto another male in a confused attempt to breed. In the toad equivalent of “let go of me,” males can make a release call to clear up the confusion, which you might have experienced from a captured toad, in-hand.

The sudden explosion of toad numbers is important for pest control (great news for your yard or garden), and the toads serve as food to other predators.

It is because of the timing of toad reappearance and rains that many native peoples believed toads were causing the rain to happen with their calls. Though they’re not summoning precipitation, toads should be celebrated and appreciated as a fleeting, seasonal sight akin to flowers blooming. Like fireworks on Independence Day, let toad calls mark and celebrate our vital rains.