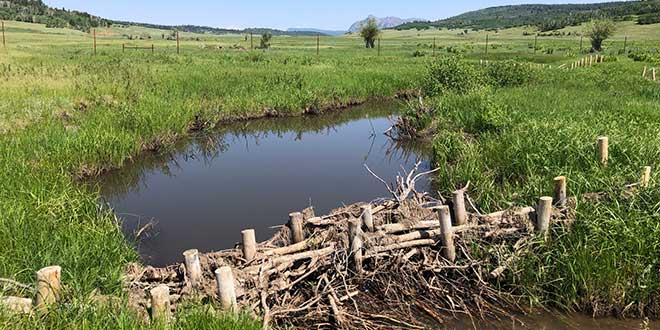 When beavers, previously thought to be a nuisance species, were eliminated from the Edward Sargent Wildlife Management Area, located north of Chama in Rio Arriba County, it had a widespread effect on the entire ecosystem.

Without their dams causing streams to pool, surrounding wetland areas began to dry up, creating a lack of large, woody vegetation. Where there once were beavers, there were now elk and grazing cattle. Instead of spilling their banks, the streams carved deep, uniform channels and sediment from eroding banks created difficult conditions for fish.

However, the Department of Game and Fish and its partners are working to restore these streams and their surrounding areas to their previous state through the installation of beaver dam analogues (BDAs) – a process that hopefully will allow beavers to return to the area.

The BDAs use wooden posts placed in a line from one side of a stream to another, with branches, rocks and other natural material used to create a man-made dam. They are being constructed along with various exclosures – high fencing that keeps larger animals, including elk, away from recovering vegetation. More than 30 BDAs have been constructed so far, along with five exclosures ranging in size from 2-15 acres each.

Banner: A BDA on San Antonio Creek in Santa Fe National Forest helps to reconnect the historic floodplain, leading to a significant increase in water storage capacity. Below: This site in the Sargent Wildlife Management Area displays one of the first steps in beaver habitat restoration: creating refugia pools to allow beaver (and fish) safe sites during low flows. 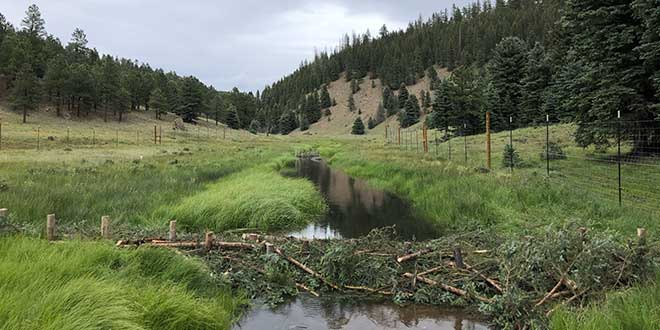 “The BDAs raise up the water level, improving vegetation growth and bringing in a variety of wildlife. The wetlands and pools that are created also enhance the riparian area adjacent to the wetlands,” Darr said. “Ultimately, the hope is that once the vegetation recovers and there’s enough of these species, we can have beavers move back into these areas and take over maintaining the dams for us to bring the ecosystem back to where it was traditionally.”

Eric Frey, the Department’s Sportfish Program Manager, said the effect on the surrounding fishery has been notable.

“It helps reduce sediment because it traps some of the sediment load in the stream, but it also creates deeper pool areas that are critical for fish,” he said. “More water generally means more fish, and it’s creating pool areas for all the different life stages – from the little guys through the adults.

“Any time we can increase vegetation and reduce erosion, creating more areas and more habitat, the fishery’s going to respond. It’s beyond just the fish – it’s the other things that are key to that whole food web. The aquatic invertebrates respond positively to stream restoration, which provides food for the fish.”

The Department has been working with Rio Grande Return, a 501(c)3 non-profit organization based in Santa Fe, on BDAs and exclosures. Reid Whittlesey, restoration manager for Rio Grande Return, said there are a number of measurable positive effects from similar structures that have been installed over the past few years, particularly in San Antonio Creek in the Jemez Mountains.

“There are a bunch of muskrats,” he said. “I’d never seen a muskrat up there before, but increasing the ponding ratio, we’re seeing a bunch more muskrats. Beaver are inhabiting the site at kind of a low population, but I’m expecting that the beaver will really increase in the next couple years. We’re seeing a ton of tadpoles in these backwater, shallow, wetted zones; a bunch of young fry – it’s kind of a whole host of metrics that seem to really be responding to these structures.”

In addition to the increase in wildlife diversity, woody plant species such as willow and cottonwood that have been planted as part of this restoration project are beginning to thrive, thanks to the change in the surrounding landscape and access to water.

Whittlesey also noted the change in the streams themselves, which have begun to spill their banks and reshape the surrounding landscape into islands and side channels with a variety of meander patterns. A recent trip to the Rio Chamita on the Sargent WMA with Department staff revealed just how much change there had been during a recent spring runoff event.

“In the reach where we’d installed the BDAs, the water was entirely accessing the floodplain and starting to develop these really complex flow patterns,” he said. “That floodplain access is really facilitating a bunch more infiltration within that zone, leading to greater water storage capacity and higher low-flow perennial release rates.”

Even when the BDAs don’t work as planned, it can actually be beneficial, Whittlesey added.

“If a BDA fails, that’s not a bad thing,” he said. “If a log structure floats downstream, that’s also not a bad thing. It’s creating and allowing for that dynamism. If a BDA gets cut around, that is meander lengthening. Then that sediment will be caught downstream by the next BDA and can help to achieve channel aggradation. Over time, the sites are going to look a lot different – they’re going to change, and that’s a good thing.” 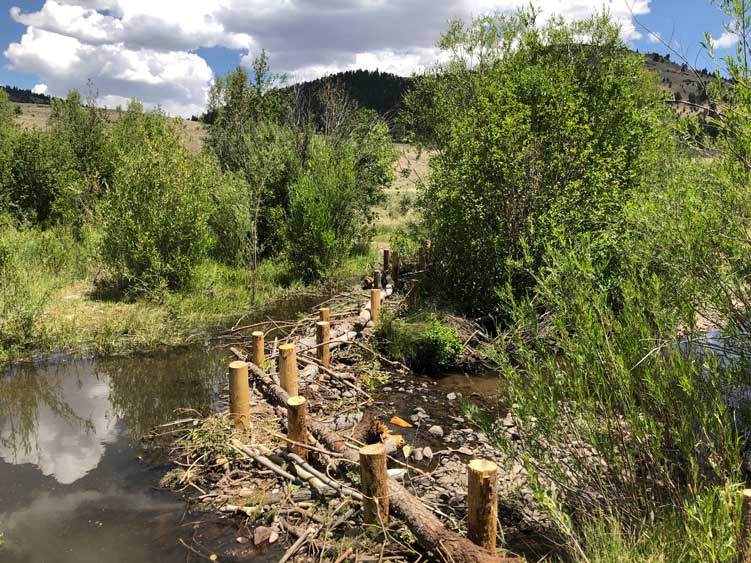 Above: A beaver dam analogue on the Rio San Antonio in Carson National Forest helps to facilitate restoring channel complexity and aid in grade control.

The Department plans to do additional research to determine where additional BDAs and exclosures might be beneficial on the Sargent WMA as well as the Elliot Barker WMA. Frey said such habitat restoration measures are a key part of a three-tiered approach that also includes regulations and stocking programs.

“If you don’t put in homes or improve the homes for those animals, you’re really kind of fighting a losing battle,” Frey said. “It’s neat and exciting that our Department’s taking that seriously and spending quite a bit of resources on improving habitat and stream restoration. I think you see a bigger response from creating better habitat – regulations and stocking are important, but without habitat and without homes for those fish, that tripod fails.”

So far, those restoration efforts appear to have been a resounding success.

“I have to be honest – I have already seen some of the most amazing recovery, in just the few years since we put these in, that I’ve seen on any project,” Darr said. “We’ve got bundles of native fish that are now using these areas where the water’s held back. We’ve got so many reptiles and so many amphibians using these areas that we didn’t traditionally see. We’ve got small mammals that are moving in and the vegetation’s all coming back. There are native birds that are really using the vegetation that’s recovered. It’s almost an instant change that one would expect to see any time you pool water in this ecosystem.”