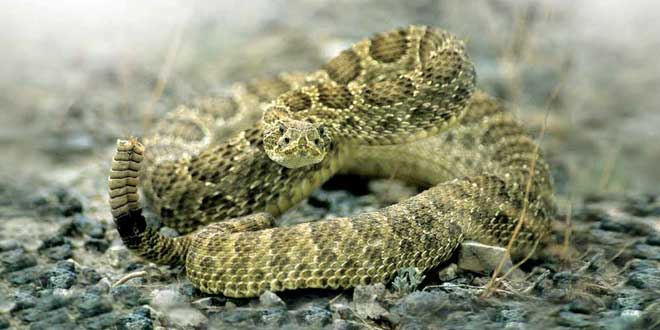 Rattlesnakes: did you know…?

So, your basic working knowledge of a rattlesnake is: They bite, they’re venomous, and poking them with a finger is a really, really bad idea. But there’s a lot more to these fascinating reptiles.

There are two different genera of rattlesnakes: Crotalus and Sistrurus, of the subfamily Crotalinae, which includes cottonmouths, copperheads, ferdelances, bushmasters and many other venomous snakes.

Rattlesnakes are found exclusively in the Americas, existing from the southern parts of Canada south to central Argentina. There are approximately 32 species of rattlesnakes and 65 or so subspecies. The largest diversity of these snakes in the United States occurs in Arizona and Texas. The United States alone serves as home to 20 species, with approximately nine of those occurring in New Mexico.

It can be difficult not to marvel at rattlesnakes, which have adapted well to many harsh environments. Possibly the most significant is that baby rattlesnakes are born alive and fully functioning, complete with fangs and venom.

You’re wondering why these reptiles aren’t hatched from eggs? Well, they are. The female does have eggs, but the eggs hatch inside her body and the newborns hit the ground running in a form of reproduction called ovoviviparity. While this certainly aids in survival as opposed to laying eggs on the ground, many other creatures will still feast on the newborns.

You already know they got their name from the rattles on the end of the tail, but did you know the rattles are made of keratin and they’ll grow a new button each time the snake sheds its skin? However, because they can shed more than once a year and often break off rattles, it is not an accurate means of aging a rattler. Although the snake will move with the rattles pointing upward to avoid breaking them off, it is not always effective.

As for the purpose, it is widely accepted that the rattles exist as a means to warn other creatures of the snake’s presence. The rattle sound is the result of the different segments hitting together. Specialized muscles shake the rattle at an incredible rate, producing that ominous buzzing sound. These muscles are powered by extra-large mitochondria (the power plants for the cell), which allows sustained activity for hours without tiring. A rattlesnake may shake its tail 50 times per second.

While commonly known as rattlesnakes, they are in a group of snakes known as pit vipers. These (loreal) pits, located in their muzzles between the nose and eye, are another amazing adaptation for survival and serve multiple purposes. While their eyesight is good at detecting movement, it is the pits that will allow a rattlesnake to detect prey in total darkness. These pits are so sensitive they can detect temperature changes of .003 degrees C or less in the snake’s direct vicinity.

Not impressed? These heat-sensing pits tie into the optic nerve and produce an image in the snake’s brain. They are like another set of eyes that lack lenses for refined vision. A snake with heat-sensing pits sees the world in both infrared and through normal vision. It would be like us wearing a clear visor that displayed the world in infrared over our eyes.

While you know they are venomous, did you know rattlesnakes possess a hemotoxin, which destroys tissue and causes swelling, internal bleeding and often extreme pain? A number of rattlesnakes also possess neurotoxins in their venom, which attacks the central nervous system. But, while caution and a healthy respect is always prudent, the risk levels are not high and bites are rare unless the rattler is provoked or threatened. People who have been consuming alcohol have the highest risk of being bitten.

While every rattlesnake bite should be considered potentially life threatening and anyone bitten should seek medical treatment immediately, you are approximately three times more likely to die from a domestic dog attack than a venomous snakebite.