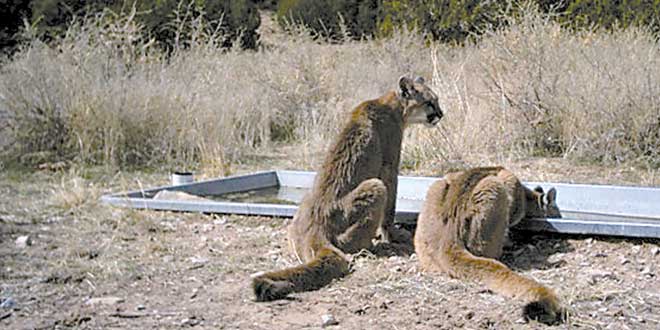 How Wildlife Deals with Heat

Compared to the snow-covered winter months and the resulting lack of resources brought by low temperatures, the warmer months might look easy for New Mexico wildlife species. But summer brings extreme heat to parts of our state and the struggle for animals to fulfill their daily needs is never-ending.

Banner: A pair of younger mountain lions stops by a drinker to quench their thirst.  Below: A black-tailed jackrabbit displays its large ears that aid in cooling. 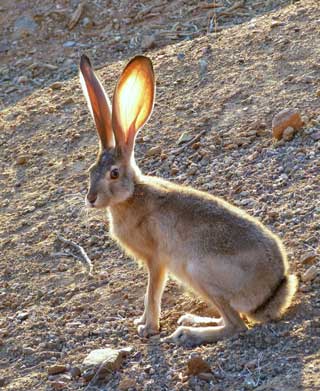 So, how does wildlife in New Mexico cope with brain-melting temperatures and persist?

Desert denizens have an array of adaptations to deal with summer — some of them physical and others behavioral.

Larger ears help dissipate excess heat. Just ask a jackrabbit or mule deer. The skin surface of big ears is highly vascular, meaning it’s loaded with blood vessels. When surrounding temperatures are lower than the animal’s body temperature, these blood vessels widen (vasodilation), which increases the amount of warmer body blood flowing through the ears. Some of that heat from the body is then lost to the environment because the ears are thinner and less insulated.

Is that thicker, winter coat making you too hot? Shed it! Lots of mammals grow thicker coats for winter. When the season changes, it triggers an animal’s hormone levels to also change. In the winter, this change provides a thicker coat to keep the animal warm, but in the summer, you’ll often see elk, deer or coyotes appearing a bit ragged as they trade winter’s coat for a lighter one better suited for heat.

One important physiological heat adaptation to keep track of when you’re outdoors is sweating. Only mammals have sweat glands, but not that many mammals sweat profusely like humans because their sweat gland counts are lower.

Sweat is made up of water and a little bit of potassium and salt. As the water in the sweat evaporates, it cools the skin. So, it can be beneficial, but if you or your hiking partner are sweating excessively or, worse, have stopped sweating even though activity continues, it’s time to hydrate, rest and seek cooler temperatures.

Where sweating isn’t much of an option, some species still use evaporative cooling to chill out. Members of the cat family, like our bobcat and mountain lion, lick themselves not only to clean and to bond, but also to help lower body temperatures through evaporation.

Below: A blue grosbeak takes a dip in a fountain to cool off. 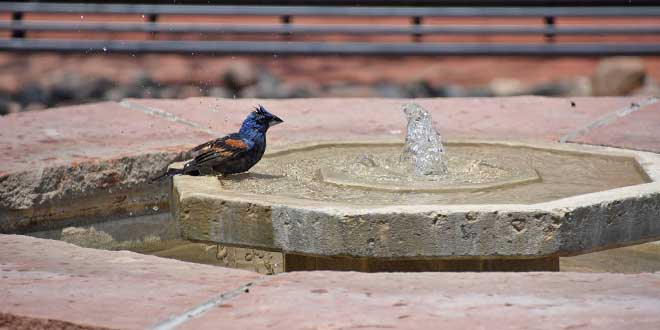 Another alternative to sweating is panting (breathing heavily over wet lungs and throat to dissipate some heat and take in cooler air). Some birds, like doves, quail and nighthawks, take panting to the next level via gular fluttering. It’s essentially panting, but throat muscles vibrate without expending much energy and air moving over the throat cools the animal. Lizards will gape (hold their mouth open) with the same idea in mind.

If you still can’t cool off, get out of the heat! When it gets too hot, animals seek shade (maybe under a tree or inside a burrow) and rest. When hotter temperatures become more and more common as summer moves in, some animals might move out via migration, returning in cooler months. Where it is an option, local populations might stay in the general area but move to higher elevations that offer cooler temperatures.

If daytime temperatures are just too hot, animals adjust the times of the day in which they are active. For instance, in response to heat, desert snakes might change from being active during the day, to being active at dawn and dusk (crepuscular). And if sunrise and sunset don’t offer enough of a reprieve from the heat, they often shift to being nocturnal (mostly active at night).

Some people want to head to the pool on hot days, and some wildlife species have the same idea. They might take a dip in standing water (a favorite of black bear) or even roll in mud (commonly seen in javelina). Mud not only cools off the animal but offers some protection from the sun’s draining rays and from pestering insects as well.

One cooling option you shouldn’t consider? Defecating on yourself. Some birds, like our turkey vulture, have been known to relief themselves on their feet and legs to cool themselves off. I guess when your food source is dead, rotting animals, more options seem appealing.