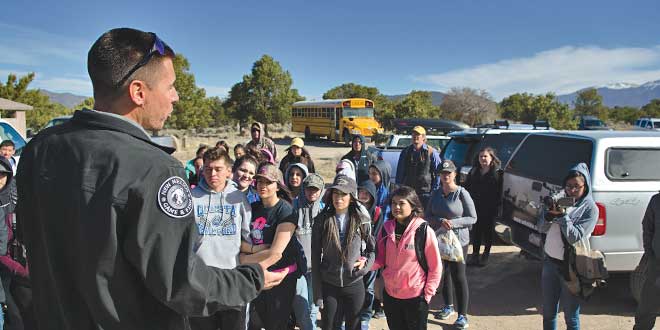 Educators see value in getting youths outside.

As society’s disconnect with nature has become more pronounced, the New Mexico Department of Game and Fish is making an effort to not only get youths outdoors, but also to get them involved.

Call the class Conservation 101. It’s a class about the satisfaction of getting out and helping while reconnecting with nature.

Above: Game and Fish coldwater fisheries biologist Laurence D’Alessandro provides instructions to students from Questa Junior and Senior High School and Taos High School prior to a hike down to the Rio Grande to release cutthroat trout. NMDGF photo by Zen Mocarski.

The department conducts several events and programs designed to restore the younger generation’s relationship with the vast wonders of the outdoors, including getting them involved in actual conservation.

In early 2016, students from two schools experienced howling winds and bitter cold as they helped department biologists in their conservation efforts.

Stepping off a bus at Eagle Nest Lake on Feb. 9, 13 Moreno Valley High School students were greeted by single-digit temperatures, an auger to drill holes in the thick ice, some fishing rods and bait.

A little more than a month later, 47 students from Questa Junior and Senior High School and 15 more from Taos High School were greeted with a strenuous hike and heavy winds.

All in the name of conservation and education.

The Moreno students were ice fishing in an effort to catch perch for disease testing. The Questa and Taos students hiked down 800 feet with strong winds howling through the Rio Grande Gorge canyons to release approximately 3,200 Rio Grande cutthroat trout as part of an ongoing effort to restore the native fish to New Mexico waters.

The students, while providing valuable help to Game and Fish biologists, got to experience an outdoor adventure.

“I think the kids were thinking of the little guppies you win at a county fair,” said Maria Cintas, an English teacher at Questa. “When they saw the fish and how many there were, they were excited about doing something with a purpose. They took great pride in getting the fish down to the river alive.”

“It was a much more difficult hike than some of them had anticipated, but they honestly enjoyed the challenge,” Gilroy said. “This was a mission and they had fun doing it.”

That sense of purpose and pride are not generally the rewards a student gets from sitting in front of a television or computer. It was hard work and students from the schools were in the field for hours trying to fulfill specific goals.

“They loved it,” Cintas said. “It would be beneficial to have more involvement with the outdoors. I think we need more opportunities to connect students on a hands-on basis.

“The majority of students felt it was difficult, but they felt it was something that needed to be done. An opportunity like this is important.” 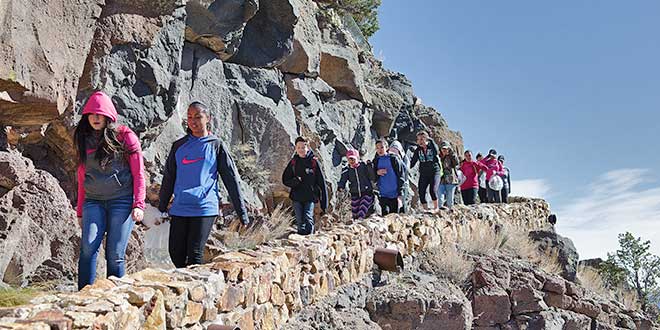 The Moreno students arrived dressed for a day of ice fishing, with winter jackets, hats and gloves. Holes were drilled in the ice and students dropped lines in hopes of catching some perch that would assist researchers in disease testing.

“I can stand in front of the class and talk all day,” said Micah Daboub, science teacher at Moreno Valley. “I can lecture and have the students watch videos, but until we get in the field, it doesn’t stick.”

Daboub believes the hands-on approach is critical for students.

“There’s a level of personal enrichment they gain from being in the field,” Daboub said. “There’s a sense of accomplishment.”

Daboub combines the field trips with pre- and post-classroom education related to the trip. Before the ice-fishing trip, he discussed wildlife diseases and how easily they can spread through a population.

“So, we combine the trip with education on disease,” he said. “That trip was the hands-on process of collecting data. Then we discussed it more afterward.”

“You get them out to get them connected with the world that they’ll be caretakers of in the future,” Gilroy said. “Getting them out motivates them to do more and it sparks new ideas.”

For Cintas, the field trip was a reward for the junior and senior Honor Society students.

“I do think there is a corelation between outdoor activities and grades because the students must maintain their academics in order to participate, just like sports and extra-curricular activities,” she said.

Daboub agreed that getting youths outdoors helps improve grades as well as attendance.

“Absolutely their grades improve,” he said. “The level of retention improves dramatically.

“I was at another school and kids that were habitually absent were not absent leading up to a trip.”

If Daboub appears to be passionate, there’s good reason.

“I think we’re losing our future stewards,” he said. “They don’t understand the connection with the land. Water comes out of the faucet and electricity out of the wall. They don’t always understand how everything is connected.”

As students spend some time in the field, that connection is being reestablished.