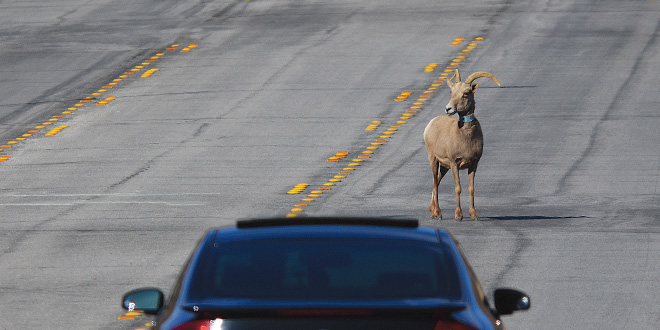 As the colors change and the temperature’s drop, hikers and wildlife enthusiasts are spending time outdoors and hunters are getting gear ready for time in the field.

All are signs of fall, which also means the days are getting shorter and more vehicles will be on the road at times when wildlife, including larger mammals, are most active: dusk and dawn.

Above: Wildlife in the roadways can be dangerous for those in a vehicle as well as the animal. Even smaller animals, such as cottontails and jackrabbits, can prove to be hazardous as motorists break or swerve in an effort to avoid a collision. Photo by Zen Mocarski.

“When it comes to wildlife, people need to be diligent during these times. Animals that are easily spotted during daylight are more difficult to detect at dusk and after dark.”

There are some simple tips that can help reduce the chances for a potentially dangerous collision.

Quintana said slowing down and looking for movement can help motorists avoid a potential disaster. Slowing down doesn’t just help avoid a collision, it can reduce the impact in the event a large animal is hit.

“And, when the headlights of a car hit an animal’s eyes, there’s a reflective color, called eyeshine, that’s quite visible,” Quintana said. “If you think you saw something, slow down.

it can prevent injuries or save the lives of motorists and wildlife. Any other distractions within the car, such as texting, can certainly make it more difficult to avoid such accidents.”

Drivers also need to take note that when one herd animal is spotted, such as deer, there may be more in the area. During the fall, male deer and elk will be entering the rut and their behavior can be unpredictable.

“During the rut you just don’t know what a buck or bull will do,” Quintana said. “They may dart straight out in the road. And, if there’s one, there may be more. A motorist shouldn’t pass one animal and think ‘all’s clear’ and step on the gas. In fact, that’s probably a good reason to slow down.”

During times of drought or seasonal green-up some of the best forage will be found alongside roadways, making it particularly attractive to numerous animals. This increases the likelihood of collisions with wildlife.

“Roads cut through wildlife habitat across New Mexico,” Quintana said. “Any animals that occur in a particular area can certainly find their way onto a roadway and if a motorist isn’t paying attention there can be consequences.”

While the fall is certainly a beautiful time of year to be enjoyed by all, wait until the car is parked before allowing your attention to be diverted from the roadway.