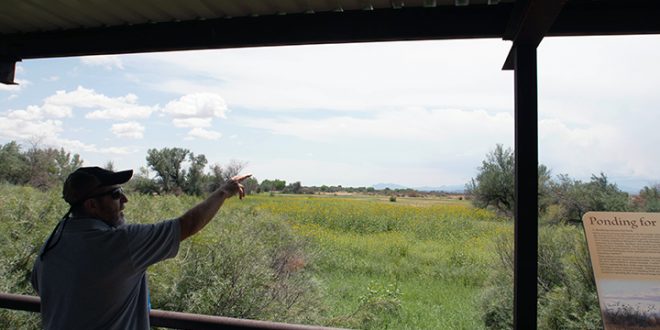 Salt cedar, Russian olive and Siberian elm are all common sights along New Mexico’s rivers and streams, despite none of them being native to the Land of Enchantment.

While all were brought to New Mexico with the best of intentions, they have since damaged the riparian habitat that many of the state’s wildlife rely upon to survive. However, the New Mexico Department of Game and Fish, along with partnering organizations such as Rio Grande Return, is working to restore riparian areas in five of the agency’s Wildlife Management Areas (WMAs) in order to benefit a number of wildlife species – primarily overwintering waterfowl, but also including the endangered southwestern willow flycatcher and western yellow-billed cuckoo, as well as the Pecos sunflower.

“The invasive trees provide some level of wildlife habitat, but they aren’t as well-suited in the habitat – the food, the cover – they provide when compared to our native plants for our native wildlife species,” said Ryan Darr, the Department’s WMA Lands Manager. “The native wildlife that we have, be it songbirds, be it deer, be it turkeys, what-have-you, historically depended on these various native species of riparian vegetation.  Invasion of non-native species over the last hundred years or so displaced many of these native plants and reduced overall plant diversity available for use by wildlife.”

Banner: Chuck Schultz, Northwest Regional Habitat Biologist for the New Mexico Department of Game and Fish, describes the benefits of the Department’s work in the Bernardo Waterfowl Management Area in Socorro County. Below: A patch of invasive salt cedar shows the effects of the salt cedar beetle that has been brought in to help eradicate the invasive species at Bernardo WMA. 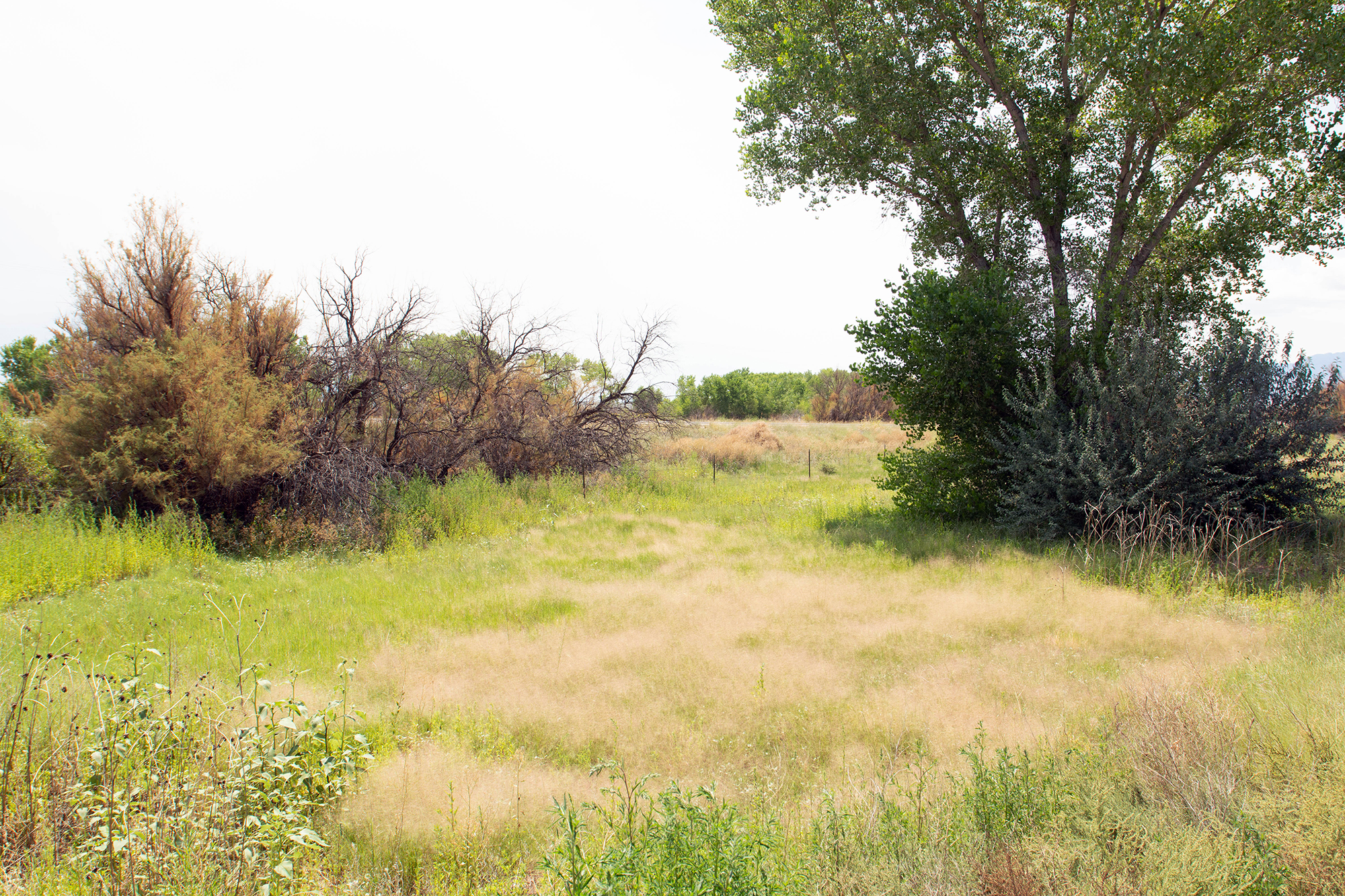 Salt cedar was originally brought to New Mexico by the Soil Conservation Service in the early 1900s in an effort to mitigate ongoing bank erosion and stabilize soil along rivers in the western United States. Shortly after they began to take hold, they took over large areas and outcompeted a number of native plant species, including cottonwoods and willows. River-management practices such as the channelization of the Rio Grande, which eliminated historic floodplains and wetlands, also contributed to the salt cedar’s dominance in the area.

“That deep, narrow channel did not provide the over-bank flooding that was needed for a lot of our native species like the cottonwoods and willows, but it actually supported things like salt cedar and invasives better, so that helped shift the balance of power,” Darr said.

The Russian olive tree was originally brought into New Mexico as a shade tree, though it eventually spread heavily into riparian areas. Similarly, former New Mexico Gov. Clyde Tingley introduced the Siberian elm in Albuquerque to fend off the effects of the Dust Bowl in the 1930s, though they are now classified as a class C noxious weed in New Mexico by the United States Department of Agriculture.

Chuck Schultz, the Department’s Northwest Regional Habitat Biologist, said these invasive species tend to grow in “monocultures” – that is, they tend to completely take over an area and don’t allow for anything else to grow among them. That contributes to degraded habitat for native flora and fauna, as well as an increased fire danger.

“Nothing else really grew in them,” Schultz said of the monoculture areas. “They grew thick. They outcompeted everything. They closed up the canopy so the earth below them never saw sunshine, so you didn’t have grasses and wildflowers growing.”

“When it gets in those thick, monoculture stands like that and takes over, it’s ripe for catastrophic wildfire,” he added. “New Mexico has had some really bad bosque fires, just ripping and crowning out through salt cedar and destroying huge swaths of bosque. We’re trying to combat that as well.” 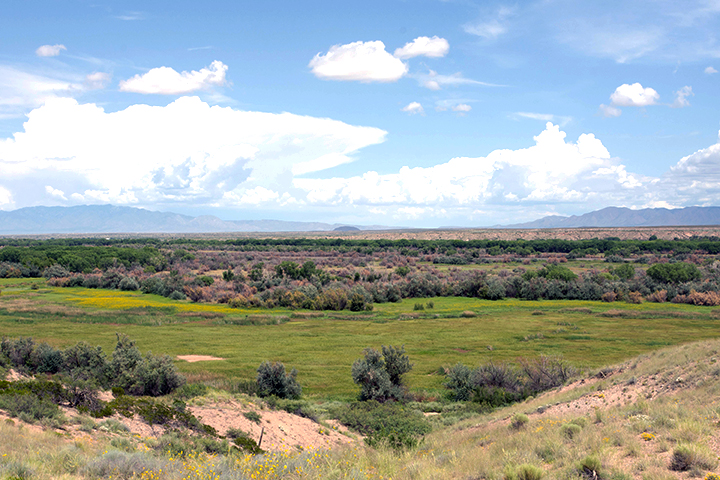 Above: An overview of La Joya Waterfowl Management Area shows where efforts are taking place to remove invasive salt cedar from the area.

The Department and its partners are currently working to remove salt cedar, Russian olive and Siberian elm from five locations statewide: the William S. Huey WMA along the Pecos River between Artesia and Carlsbad in Eddy County; the Bernardo, La Joya and Socorro-Escondida WMAs in Socorro County; and the Tucumcari Lake WMA near Tucumcari in Quay County.

“We will go in and use various removal techniques to take out salt cedar, Russian olive and, in some cases, elms in a patchy mosaic pattern,” Darr said. “One of the techniques we commonly use is a piece of equipment called a masticator. It’s basically a big tractor with a spinning drum with teeth that grind down the scrubby salt cedar and other invasives. We also use hand-cutting and piling with chainsaws, and we also use grubbing, which basically takes a large excavator – a large, digging piece of equipment – and just pops the invasive trees out by the roots.” The soils and the site settings determine which method of removal will be used.

When invasive species re-sprout after the initial removal efforts, Department crews use limited herbicide and mechanical means to help reduce their density. The tamarisk leaf beetle was introduced as a biological control agent for salt cedar throughout the West decades ago. This has also helped to stress salt cedar and assisted with restoration efforts. You can see large areas of orange-and-brown-colored salt cedar where the beetles are doing their job.

However, in areas where restoration work has taken place, there has already been an impressive amount of change to the landscape. At Bernardo WMA, some clusters of salt cedar have been killed by tamarisk leaf beetles. Other stands of salt cedar and Russian olive have been taken out by mechanical means, and native plants that had not been seen since the introduction of those invasive species decades earlier are once again flourishing in their place. 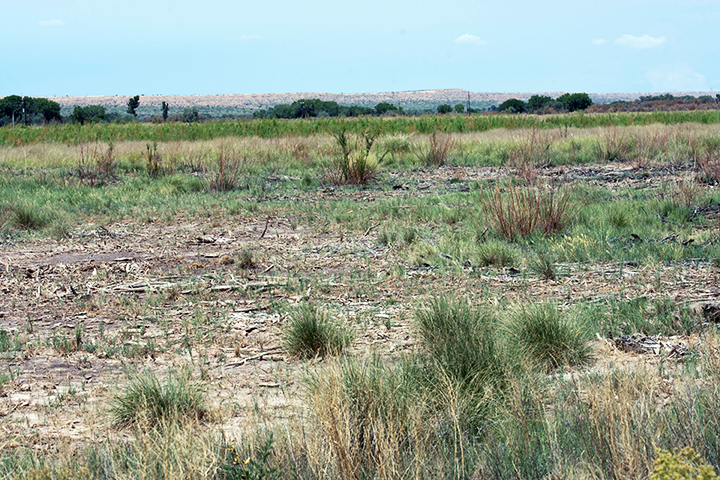 Above: Department crews used a masticator to eliminate a previous patch of invasive salt cedar at Bernardo WMA. Crews will plant various native plant species in the area to create better habitat for overwintering waterfowl, as well as other wildlife species.

“In a lot of these areas where we’ve pulled out these salt cedar and Russian olive monocultures, we’ve seen plants like inland salt grasses and alkali sacaton grasses – native grasses – that have just thrived and come back in ways we did not imagine,” Schultz said. “We were kind of blown away by it, and it’s really great for habitat.”

Native cottonwoods and willows, including the shrub-like coyote willow and tree-like Goodding’s willow, are immediately planted in place of the invasive species to help restore the habitat to its former state and help stabilize the soils. In addition, crews are also planting berry-producing and seed-producing shrubs such as wolfberry and New Mexico olive in an effort to diversify the habitat. They may also seed herbaceous species like grasses when natural recovery is unsatisfactory.

In all, 19 species have been planted throughout the project areas using various methods. Some were planted using poles and whips, where limbs were taken off live trees and planted after holes were drilled into the ground until water was reached. Other plant species came in containers from local nurseries and New Mexico State Forestry’s seedling conservation program. In some areas, the containerized plants have had a higher survival rate than the poles and whips, but the Department is adjusting its planting strategies to balance the survival rate as part of an adaptive-management approach.

“We’re trying to source these things out from semi-local places so we would have some local genetics and hopefully increase our rate of survival on these plantings,” Schultz said. “These species are things that you would find up and down the valley anyway: you’ve got your cottonwoods; you’ve got a variety of willows; we tried some Arizona sycamores, which you see growing in some of our washes just south of there; there’s skunkbush sumac; there’s golden currant; there’s a variety of things that are native. They work better with our soils, they work better with our semi-arid environment, they provide shelter for animals, they supply food – they meet a bunch of habitat requirements, and they’re all native varieties.”

Schultz said of the original 19 species used in the project areas, about seven have taken hold and performed well. Various factors, including impermeable clay-based soils, drought conditions and increased levels of soil salinity have made for difficult growing conditions for certain species – though clusters of plants can thrive within mere yards of other clusters that have died off. The recent appearance of an elk herd in the Middle Rio Grande Valley has added to the challenges of native plantings by doubling the mortality rate of various plants, leading to the added labor and financial cost of constructing large high-fence exclosures and individual tree fencing.

As part of the restoration project, thousands of trees are planted in a mosaic pattern, with some areas of invasive species remaining to avoid shocking the landscape and its resident wildlife.

“I really appreciate the approach that Ryan (Darr) took on behalf of Game and Fish to use a staged approach to removing the old and beetle-killed salt cedar,” said Cameron Weber, conservation director for Rio Grande Return. “It wasn’t completely taken out, but they left patches as places of refuge for the birds and other wildlife, and then we came in and are planting in the spaces in between.” 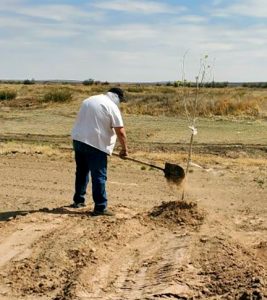 Weber noted that previous management models throughout the West had hundreds of acres being completely cleared at a time, leaving nothing behind. This method can often lead to large-scale soil erosion.

“I think it’s taken a lot of discourse and influential folks and science to change the norms around that, and Game and Fish is doing a good job of reflecting that change and doing things with a phased approach with some sort of understanding of the impacts on the wildlife – trying to make it a gentle transition,” she said.

Crews from the Department and partners such as Rio Grande Return plant thousands of trees at a time in groves and clumps of at least five acres, following the model of the habitat they’re replacing to preserve cover for wildlife.

“One of the basics of landscape ecology is to understand that there’s patchiness, and patchiness can be beneficial where it creates a lot of edges, or it can be fragmentation as a landscape breaks up because of different forms of disturbance,” Weber said. “I think by retaining patches of nonnatives as native plant restoration is occurring, it holds on to the beneficial patchiness for a little while longer.”

In the last few years alone, the work of the Department and its partners has led to the planting of more than 5,700 native trees and shrubs on WMAs, along with the removal of more than 1,500 acres of invasive species. The work is ongoing, with crews coming in to keep weeds cut back and replace poles and whips that have died off.

The primary goals of the project are to improve wildlife habitat, increase water efficiency and improve water-management capabilities.

“We’re just trying to assist nature in recovering to what the habitat historically was and what we hope can survive long-term: habitat that’s more fire-resistant but still also resistant to climate change and the drying effects we’re seeing,” Darr said.

“Restoration efforts such as this have become a much more common management practice throughout the West in recent decades. Game and Fish is on board with nearby federal wildlife refuges, non-profits, private landowners and other land-management agencies, trying to do what we can to restore native habitats for our wildlife, fish and the benefit of all who enjoy the outdoors in New Mexico.”

Collaborative efforts are being utilized on this project to engage expertise in examining solutions to high levels of salts that occur in soils and shallow ground water; design and engineering efforts to improve water infrastructure and management capabilities; understanding hydrology and wetlands dynamics; and surveys for threatened and endangered species, among other goals.

Darren Vaughan is the Communications Director for the New Mexico Department of Game and Fish.