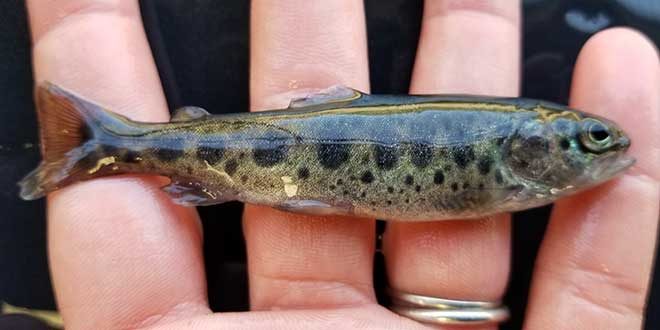 Eagle Nest Lake has long been known as an angler’s paradise, particularly when it comes to rainbow trout. However, the introduction of non-native northern pike to the lake has led the Department to seek solutions that will allow both pike and trout to thrive, preserving the fishery for generations of anglers to come.

The Department’s Fisheries Management Division teamed with New Mexico State University (NMSU) to conduct a research project at Eagle Nest Lake to learn how to best manage a rainbow trout fishery with northern pike present in the lake. This is a challenge as northern pike are a highly piscivorous (fish-eating) species that have been eating the smaller trout the Department historically stocked in the lake.

Banner: The Department used to stock approximately 600,000 fingerling-sized trout in Eagle Nest Lake each year, but their survival rate dropped when northern pike were illegally introduced into the lake in the mid-2000s. Below: In recent years, the Department has stocked approximately 300,000 sub-catchable-sized trout in Eagle Nest Lake per year, but the fish-eating northern pike has made it so fewer of them grow to a catchable size. 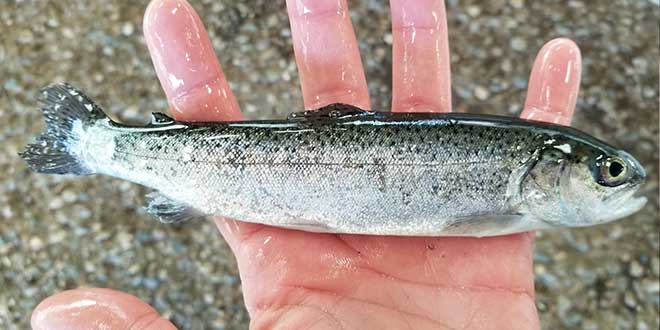 Led by Department coldwater biologist Jane Trujillo, who is completing her master’s degree at NMSU, the research aimed to answer several different questions, including what size and species were being eaten by northern pike. “The main thing we want to learn is how to live with northern pike and manage the rainbow trout fishery around them,” Trujillo said.

Northern pike were illegally introduced into Eagle Nest Lake in the mid-2000s, and their population has grown steadily since. It is illegal to transport live fish and transplant them into a body of water, and the consequences can be devastating to other species, Trujillo said.

“It’s unfortunate because when people unlawfully stock species into a body of water, they may not necessarily understand or care about the consequences,” she said. “We have an angler base that likes to fish for coldwater species like rainbow trout and kokanee, so when someone introduces northern pike to a system like that, it costs anglers who’ve been fishing at Eagle Nest Lake for 30 years.”

Part of the reason northern pike have thrived in Eagle Nest Lake is because of its shallow, weedy bottom, allowing them ideal conditions to reproduce. Pike were also introduced in Navajo Lake but have not had as much success because of that lake’s sheer canyon wall shoreline. 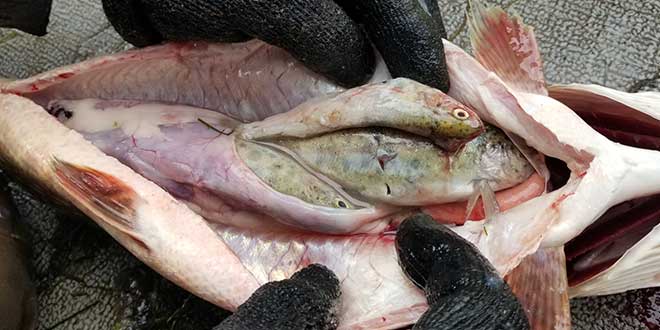 Above: Northern pike are a piscivorous (fish-eating) species, with rainbow trout serving as one of their primary food sources.

Mandatory harvest regulations are in place for northern pike at Eagle Nest Lake, where they must be kept and not returned to the lake if caught. While such measures will never completely eradicate the invasive northern pike from the lake, it will help control the population. The only way to completely remove northern pike from the lake would be to treat the water in a way that would eliminate all species from the lake for an extended period, taking away a valuable angling opportunity. While surrounding states such as Utah have used such treatments, the Department has no plans to do the same in New Mexico. Trujillo said other means of removal would not be successful on a larger scale. “Even if we made focused, mechanical removal efforts, we wouldn’t be able to eradicate them; we would maybe suppress them, but mechanical removals are typically ineffective at achieving the desired outcome,” she said.

Trout stocking operations have been vastly affected by the presence of pike in the lake. Previously, the Department stocked approximately 600,000 fingerling-sized trout – approximately 3-5 inches in length – in the lake per year, only to be eaten by northern pike before they could grow to a size where anglers could catch them. In response, the Department began stocking 300,000 sub-catchable sized trout – approximately 6-8 inches in length – per year, with similar results.

The Department used microscopic coded-wire tags to mark fingerling- and sub-catchable-sized trout throughout late 2020 and early 2021 at Red River Hatchery before stocking them in Eagle Nest Lake. Using gill nets and boat-mounted electrofishing equipment during surveys in April, July and October 2020, as well as monthly surveys from April through October 2021, researchers collected 376 northern pike from the lake. They analyzed their stomach contents to determine what size and species of fish were being eaten. 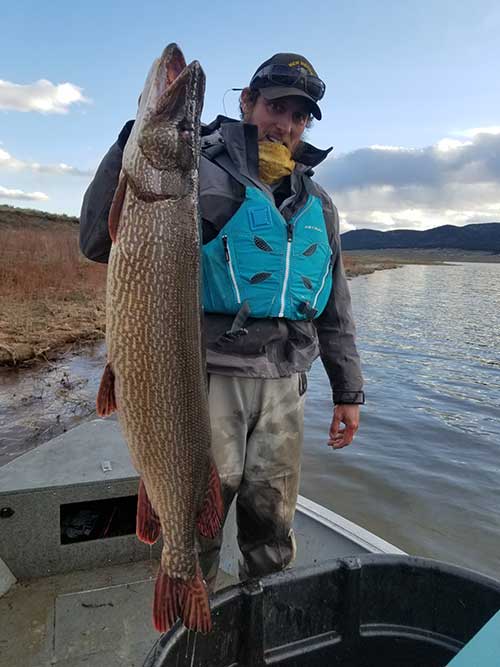 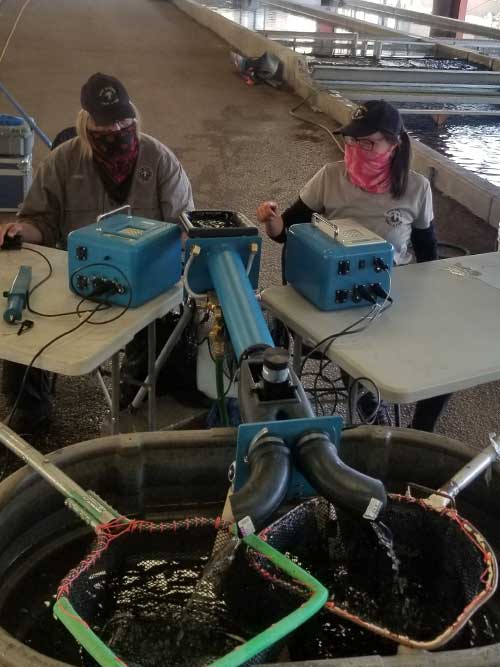 Above, left: Department biologist Bryan Ferguson with a large northern pike during a July 2020 survey at Eagle Nest Lake. Above, right: Department staff marking fingerling rainbow trout at Red River Hatchery in May 2021.

Of the 376 pike captured, 156 had food in their stomachs – the majority of which were rainbow trout, followed by yellow perch. The fish they ate ranged in size from 1 to 11 inches long, though the majority were between 5 and 7 inches long. Thus, researchers determined that in order to maintain a healthy rainbow trout fishery in a lake that is also home to northern pike, the Department will need to stock larger rainbow trout going forward. The Department plans to begin stocking trout approximately 8.5 inches long. “If we get rainbows in there above a certain size – it could be the 10-inch size range –and they can avoid predation by most northern pike, they might have a shot of being available to anglers,” Trujillo said.

Stocking larger fish does come with additional challenges, however. It takes longer for fish to grow to that size, and because they are bigger, they take up more room in the hatchery as well as stocking trucks. That means the number of fish stocked per year in Eagle Nest Lake will likely dip to fewer than 100,000, but research shows that stocking small fish just isn’t working anymore, Trujillo said.

The Department plans to stock the lake with catchable or large sub-catchable rainbow trout. Trout typically grow 1 inch per month during the summer, so if they are stocked at a length between 8 and 9 inches, they will be catchable within a couple of months. “We’re trying to figure out a way to produce a quality trout fishery – that’s always been our primary goal and objective,” Trujillo said.