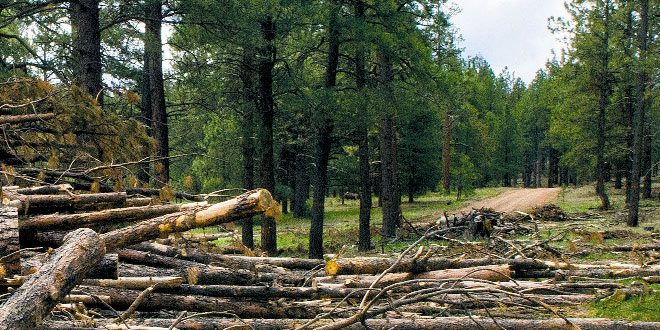 Rows of densely-packed ponderosa pine line the sides of the road traveling deep into the Cibola National Forest in the Zuni Mountains west of Grants.

Dark shadows prevail and little can be seen beyond the first layer of trees.

There’s a feeling of claustrophobia as a wall of ponderosas looks like a blur outside a car window. Some see this as a sign of forest health; others see it as a big problem. Historical documentation indicates forests in the Southwest have grown increasingly crowded with some now believed to be seven times denser than at the turn of the 20th century.

While the link between forest health and wildlife might not appear clear to some, to the Department of Game and Fish, it is a critical aspect for healthy populations. So critical that the department takes an active role in forest habitat restoration. Such is the case with the Cibola National Forest.

Above: More than 40,000 cubic feet of wood has been harvested within a restoration area in the Cibola National Forest.

Going from one forest extreme to another is rarely a productive solution, and meeting in the middle can be a difficult goal to achieve. Human activities, such as a century of fire suppression and poor timber practices led to overgrowth and unhealthy habitat for wildlife and vegetation.

As a result, the landscape often no longer is healthy for the trees, grasses or wildlife.

For animals such as deer, elk and turkey, overgrowth provides a wealth of cover for predatory animals such as cougars and bobcats. Overgrown forests become great hunting grounds. Crowded together, trees can’t reach historical sizes and little sunlight reaches the forest floor, preventing the growth of grasses, forbs and shrubs, critical nourishment for deer, elk and other wildlife.

“It’s all so intertwined,” said Chuck Schultz, northwest regional habitat biologist for Game and Fish. “Just because a person sees a bunch of trees doesn’t mean it’s a healthy ecosystem. Forests throughout the country went untouched for many years and instead of healthy, well-spaced, large ponderosa pine trees, we see overcrowded and stunted forests.”
As a result of overgrowth, catastrophic fires have consumed millions of acres and, during times of drought, have made some forests vulnerable to disease and insects, in particular the bark beetle, which decimated portions of forest over a decade ago.

The overgrowth in the forests is believed to be a primary factor in the number of high-intensity fires that have crippled portions of forests throughout the Southwest.

The Las Conchas fire of 2011, which burned 150,000 acres in the Santa Fe National Forest of northern New Mexico, was intense and fast-moving and the immediate result was charred countryside. And the aftermath proved as troublesome as the fire itself. Subsequent ash flows during monsoonal rains killed aquatic life in streams, and the water quality remained poor long after the rains subsided.

“Frequent low-intensity fire was the historical norm in ponderosa pine forests,” said Jacob Davidson, habitat manager for Game and Fish. “Widespread high-intensity fires in these areas can have devastating effects long after the fire has been extinguished.”

Well-spaced trees offer natural fire breaks. While a blaze on the forest floor will consume the low-lying vegetation and char the lower trunks of trees, it won’t crest at the top, which is known as a “crown fire.” Fires that reach the canopy of the forest tend to spread quickly and can result in the most devastating wildfires.

Such was the case in the Las Conchas Fire and the 2002 Wallow Fire in Arizona.

It was clear a new thought process was necessary as catastrophic fires in the southwestern United States were occurring in unprecedented frequencies.

Initial efforts to address forest issues were not effective, as a good deal of the money intended to bolster restoration was diverted to fire suppression. Help came in 2009 with the Collaborative Forest Landscape Restoration Program, administered by the U.S. Forest Service, was established.

Working with a diverse group of agencies, businesses and organizations, including the New Mexico Department of Game and Fish, the National Wild Turkey Federation, tribes, and the Wood Industries Network, the Forest Service developed a plan to improve conditions in the Zuni Mountains.

The purpose of the program is to reduce fire risk, provide relief of fire suppression costs, create sustainable forest-based business and jobs, and protect wildlife habitat. Restoration would no longer be about Band-Aids and duct tape, but about committing to wholesale improvements to vast quantities of the landscape in a particular area.

Some of the funds distributed by the program have found their way into New Mexico to improve conditions in the Cibola National Forest. 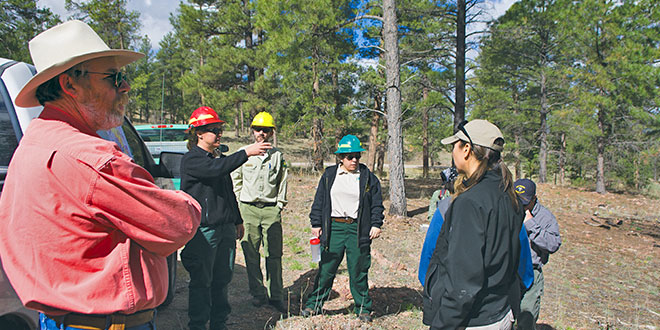 Above: Scott Lerich, left, with the National Wild Turkey Federation, listens to a presentation from U.S. Forest Service personnel at one of the areas to have undergone restoration efforts in the Zuni Mountains.

“Funding and collaboration with a host of agencies was a big step,” Davidson said. “While any thinning can be beneficial, to have a major impact on the landscape you need funding and buy-in from the public.

“The number and severity of fires in the West has opened a lot of eyes. Conducting restoration efforts such as this can be both beneficial to local economies as well as a cost-saving measure when it comes to fire suppression.”

In the Cibola National Forest, the Forest Service has worked closely with local residents and businesses in an effort to create a template to be followed in future projects.

Instead of leaving potential fuel on the forest floor, the agency has worked with Mount Taylor Manufacturing, which, from 2012-2015, harvested 40,000 cubic feet of wood products. The business employs personnel who spend money within the local economy, benefiting all.

The federal dollars only cover 50 percent of the treatment costs, which must be matched to receive funding. In the Cibola, the price Mount Taylor Manufacturing pays to haul the wood to the mill qualifies as matching dollars.

The Department of Game and Fish has committed $15,000 in Habitat Stamp revenue for controlled burns and another $1 million in Pittman-Robertson federal grant funds to aid in the restoration of the Cibola National Forest.

“There are many layers to a project like this,” Davidson said. “Among those layers is a benefit to wildlife, and Game and Fish has a commitment to protecting the state’s resources.”

Opposite inset: Scott Lerich, left, with the National Wild Turkey Federation, listens to a presentation from U.S. Forest Service personnel at one of the areas to have undergone restoration efforts in the Zuni Mountains.