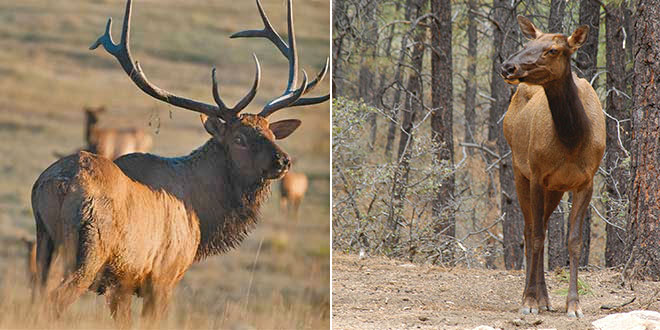 To suggest people are passionate about wildlife might be an understatement and attempts to dispel preconceived notions might be considered blasphemy.

Such was the case with a man at the New Mexico State Fair.

Above left: Bull elk grow and shed large antlers each year. Made of bone, as antlers grow they are protected by a fuzzy-like skin known as velvet, but by late summer the antlers have hardened and the velvet is rubbed off or falls off. During the spring the antlers drop and the process begins anew. Photo by Dan Williams.

Above right: Cow elk do not have antlers. Photo by Zen Mocarski.

It was mid-September and the state fair was in full swing. I was assigned to work the Game and Fish exhibit, which provides a break from my normal duties as a game warden. While entertaining, it is not easy work. Responsibilities include having to feed the various critters, cleaning the animal exhibits,keeping an eye on the fish pond water temperature, cleaning up at closing time and fielding questions from the public.

Those questions can be interesting, entertaining and sometimes frustrating. Occasionally, all three come into play.

A gentleman approached me and in a calm but serious voice, said: “I have a question I have been wanting to ask you.” He said for some time he had been pondering whether a male elk was still considered a bull after it had dropped its antlers.

I looked him straight in the eyes and told him, “Yes.”

You might think that would end the conversation, considering the question had been answered, but he looked at me with a somewhat puzzled expression and insisted that when a bull dropped its antlers, it must be a cow.

This was going to be more difficult than I thought.

I explained to him even though the bull elk had dropped its antlers, it is still a bull elk and nothing had changed other than having no antlers.

A wildlife professional wasn’t going to sway this man’s long-held belief. He looked at me and insisted it was now a cow elk because it had no antlers. I continued to tell the gentleman that bull elk shed their antlers every year in the spring when their testosterone levels are at their lowest and the low testosterone levels causes the bone connected to the base of the antler to deteriorate and eventually fall off.

He wasn’t buying the explanation and we continued to discuss his question for the next 40 minutes or so before he walked off.

Approximately 30 minutes later, the same gentleman approached me again and using a much different tone said a bull elk, after dropping its antlers is no longer a bull elk.

So we went through the whole process again. For the next 20 minutes or so, using different terminology and explanations, I tried to help him understand why a bull elk did not go through a metamorphosis when the antlers dropped. But, he just could not believe it and was becoming quite agitated with me.

In the middle of one of my explanations, he stammered away in disgust.

To my amazement, he approached me a third time and said there is no way possible a bull elk could be a bull elk if it has no antlers, therefore it has to be a cow.

I was not willing to spend any more time with him discussing his magical transformation of a bull elk to a cow elk so I simply explained that I couldn’t spend any more time on the subject. After all, there were critters to feed, exhibits to clean, and water temperatures to watch.

When he walked away, I’m sure he still believed that when antlers fall a bull turns into a cow. And, surprisingly, it wasn’t even midnight.

Christopher Ortega is the Sergeant in the Las Cruces Supervisory District for the New Mexico Department of Game and Fish.