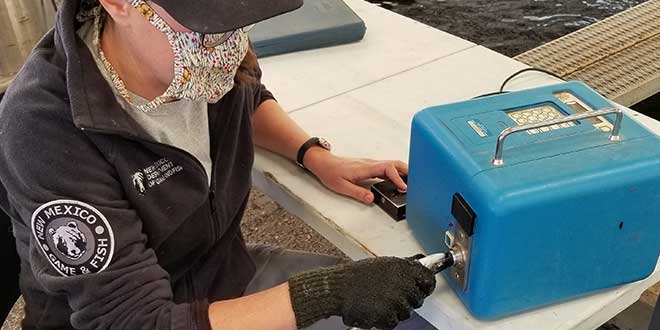 Northern pike almost exclusively consume fish, and Eagle Nest Lake offers a plentiful menu including yellow perch, white sucker and fathead minnow. When given a choice, however, these fish may go after the fish most popular with anglers—rainbow trout.

In fact, according to Jane Trujillo, coldwater fisheries biologist with the Department, biologists once found a full-sized rainbow trout measuring over 10-inches in the stomach contents of a northern pike.

To gain a better understanding of the survival rate of rainbow trout at Eagle Nest Lake and the predatory role of northern pike, the Department tagged a total of 75,000 fingerlings (three-inch) and sub-catchable (six-inch) rainbow trout reared at Red River State Trout Hatchery and destined for the lake. The fish were marked with a microscopic wire tag in the snout, explained Trujillo. This tag, referred to as a coded wire tag, “will allow us to later identify when the fish was stocked and at what size,” she noted.

“Results of this study will help us understand if fingerling or sub-catchable rainbow trout survival differs, how long it takes for a fish to reach a catchable size and fish condition post-stocking,” she said. “This information will help us to develop a stocking protocol that maximizes hatchery resources to benefit angler catch.”

Northern pike, an aggressive fish that can grow up to 3.5 feet in length, first discovered in Eagle Nest Lake in 2011, were most likely illegally introduced. Species introductions, such as this one, are illegal and can jeopardize existing fisheries in New Mexico. Remember – never move fish between bodies of water, noted Trujillo.

“We will also be conducting surveys at Eagle Nest Lake in spring, summer and fall for the next couple of years to gather data about seasonal changes to northern pike diet,” she said. Preliminary results show rainbow trout and kokanee salmon make up a substantial portion of northern pike diet in the lake.

For more information about this program, visit: https://magazine.wildlife.state.nm.us/keeping-pike-numbers-bay/.