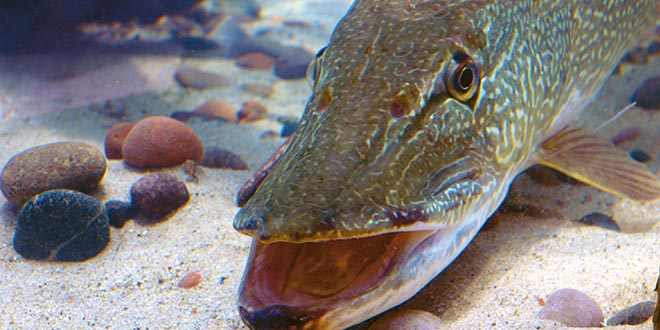 Efforts at Eagle Nest Lake seem to be keeping pike numbers at bay. Five years after rules were put into place to protect this northeastern lake, New Mexico Department of Game and Fish biologists are reporting what appears to be positive results.

Above: Following the discovery of northern pike at Eagle Nest Lake, New Mexico Department of Game and Fish biologists became concerned about the potential impacts this aggressive predatory fish might have on rainbow trout and kokanee salmon. NMDGF photo by Dan Williams.

Following the 2010 discovery of northern pike in Eagle Nest Lake, discussions ensued about what actions might best protect the thriving rainbow trout and kokanee salmon fishery.

“Northern pike are aggressive, predatory fish,” said Laurence D’Alessandro, coldwater fisheries biologist for Game and Fish. “The discovery of these fish at Eagle Nest continues to be a real threat to the future of salmon and trout fishing at the lake.”

Options such as chemical treatment would be costly for a large body of water, so what followed in 2011 was a mandatory catch-and-kill regulation on northern pike at the lake.

More information is needed, but early results suggest it has the potential to be effective.

“While they can spawn at Eagle Nest, we haven’t been documenting younger age classes,” D’Alessandro said. “The catch trends on pike have been reducing the last two years, but that’s not enough data to say the population is decreasing. We need to continue monitoring.”

D’Alessandro said trends from the last two years were promising, but that it is obvious from recent surveys that pike successfully spawned in 2015. 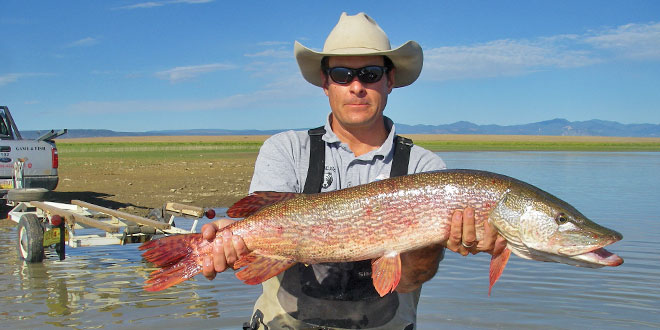 Above: Eric Frey, Department of Game and Fish sportfish program manager, holds a northern pike. The fish were illegally introduced into Eagle Nest Lake. Some believe an individual may have released the pike in an effort to control the yellow perch population, which also were illegally placed into the lake. NMDGF photo.

The department knows the northern pike were illegally introduced to the lake, but why and how remains a mystery. It is possible someone intentionally placed the fish into Eagle Nest to control white sucker and yellow perch populations.

“Yellow perch don’t belong in this lake, either,” D’Alessandro said. “They were illegally introduced some time in the 1990’s, possibly from a bait bucket, and their population exploded.”

Fortunately, predatory fish such as northern pike – which find rainbow trout and kokanee salmon more palatable than yellow perch – tend to increase in numbers at a slower rate than their prey.

“Ironic,” D’Alessandro said. “Whoever introduced this fish thinking it might control yellow perch probably didn’t realize it would actually feast heavily on trout and salmon.”

Yellow perch have dorsal fin spines not present on salmon and trout. Although the pike do eat perch – they are the most common fish in the lake – the spines make them more difficult to consume.

Illegal introductions such as this can be costly to the department, which annually stocks about 600,000 trout and 200,000 salmon into the lake.

“Illegal stockings are detrimental to our waters,” D’Alessandro said. “Not only does Game and Fish have to put resources into addressing these predators, the public loses as well by having a productive fishery taken over by an illegally introduced species.”

Before the introduction of northern pike, department biologists found fingerling-size fish could grow quickly at Eagle Nest Lake, and stocking smaller fish costs the agency less than having to grow them to larger sizes within a hatchery.

Now, D’Alessandro said, there are plans to look at the survival rates of the smaller fish and determine whether it will be necessary to rear larger fish at a hatchery prior to stocking. This would cost the department considerably more money to maintain this fishery.

“This will give us a cost-benefit of stocking fingerlings, which are cheaper to raise than those we need to grow larger,” D’Alessandro said.

“The fingerling study will tell us a lot as to which direction we need to go in order to manage Eagle Nest Lake in a productive manner.”

For anglers wishing to help, D’Alessandro said the best thing they can do is to wet a line and target the pike.

“They’re a lot of fun to catch, it’ll help the fishery, and there’s no limit for pike at Eagle Nest,” he said.

Anyone witnessing illegal stockings is encouraged to contact the Operation Game Thief 24-hour hotline at 800-432-GAME (4263).

Preheat the oven to 350 degrees. Melt butter and pour into a 9×13-inch cake pan. Place fillets in the butter and season with salt and pepper. Slice onions and green peppers over fillets. Sprinkle teaspoons of lemon juice over fillets. Cover the fillets with 6-8 strips of bacon.

Bake for about 25 minutes and serve.