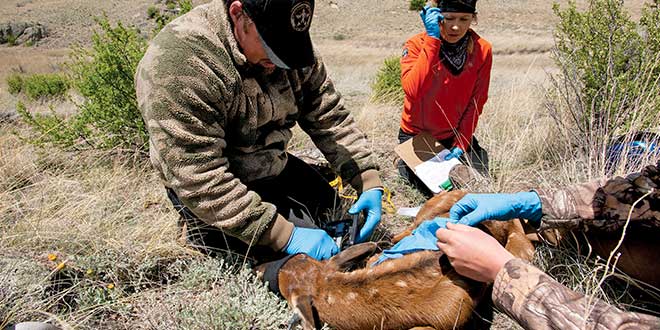 Captures are conducted to accomplish a variety of specific goals, said Nicole Tatman, big game program manager with the Department.

“Biologist are looking for some piece of information from the species or herd.” For example, a capture could help biologists investigate why a population of elk is declining in certain areas.

“Recently, a lot of projects in the western United States have focused on migratory corridors so animals may be captured and fitted with GPS collars to track their movements and see when and where they migrate,” Tatman continued. As a result, “we can better manage wildlife crossings on highways or minimize disturbance along their winter range or migratory corridors.” 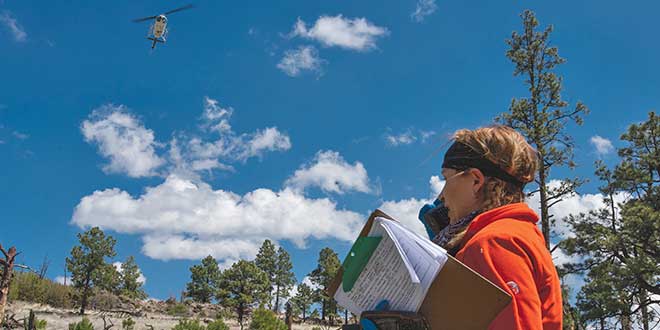 In an interview with New Mexico Wildlife, Tatman answers questions about how captures are conducted, how the animals are impacted by this activity and what to do if a capture is conducted in your area.

?Are elk very aggressive? What about other species you capture?
Most species I’ve captured (elk, deer, bighorn sheep, pronghorn) are not aggressive to capture teams. The primary defense strategy for these species is to flee from a threat, and they generally see people as a threat. However, on occasion I’ve seen them become aggressive and charge at the capture teams. When an animal feels threatened it can be unpredictable, but capture teams are trained on how to handle these situations. Because of this unpredictability, it’s always best to keep your distance from wild animals. ?During calf captures, the calves are separated from their mothers. How does the baby find its way back to its mother?
The defense strategy for elk calves is to remain motionless and hide for their first few weeks of life. In this way, they avoid being detected by predators and the mother moves a short distance away to forage. She will come back to the calf every several hours to let it nurse, but it largely spends its first few weeks of life hiding. During our captures we quickly tag the calf, take some measurements and then return it to its hiding location. Since the mother is always in the general area and vigilant of her calf, she knows this is occurring but will return to her calf as quickly as possible. The female elk and her calf have a strong bond and desire to stay together so even when calves are separated from their mother, they almost always find their way back to one another. ?By handling the calves, aren’t you transferring the scent of humans to the animal? Won’t the mother reject the calf then?
Young elk are scentless so we are very careful about scent transfer when we capture them. Because of this, we wear gloves and work quickly to minimize scent transfer. ?Don’t all captures result in a few mortalities?
Any type of wildlife capture is risky to the animal and mortalities can occur. However, we gain invaluable information from placing transmitters on animals that benefits the herd and the species as a whole. With better information we can make more informed management recommendations for herds that we wouldn’t otherwise be able to. Mortality rates for our captures are below five percent so while captures can result in some mortality, the information gained helps the herd overall. ?It seems like captures are dangerous for the wildlife. Aren’t the animals stressed out by the loud helicopters and physical handling?
There is some risk associated whenever biologists handle wildlife, to both the animal and the person handling it. But biologists undergo extensive training to minimize the stress and risk to the animal including processing the animal as quickly as possible, talking in hushed voices, after blindfolding the animal which causes them to be calmer and monitoring vital signs. Additionally, the information gathered by doing these captures benefits the herd as a whole. Collaring allows us an opportunity to ask important questions about the herd like how many are surviving, or if they are dying, then what is the cause? How are they using the landscape? When are they giving birth to young and where? Are those juveniles healthy at birth or small and malnourished? Are the animals able to acquire enough forage resources or are they stressed and thin? Answers to these questions allow us to manage the herd at a healthy level where individuals are able to acquire enough resources and move throughout the landscape effectively. Ultimately, these healthy herds are present for the public to appreciate and are also utilized as a recreation and food source for families. ?Do you conduct captures during hunts?
We do not conduct captures during scheduled hunts for that particular species. ?What should I do if a capture is being conducted in my area or near my home?
Capture teams avoid homes and structures so there’s no need to be concerned. If folks are interested and can see what is going on, it’s best to watch the capture team work from a distance so you don’t disturb the team or the animal. The capture team will be working quickly and quietly to minimize the stress on the captured animal. If you have questions about the capture you can always contact one of the Department’s offices to inquire. ?What other species does the Department capture for scientific purposes?
We capture a variety of species from mammals to birds to reptiles for data collection. If there is a scientific or wildlife management need to collect data on a species, there will generally be a project working to answer that question. We also collaborate with other entities to implement projects across the state.
Share

Nicole Tatman is the Big Game Program Manager for the New Mexico Department of Game and Fish.