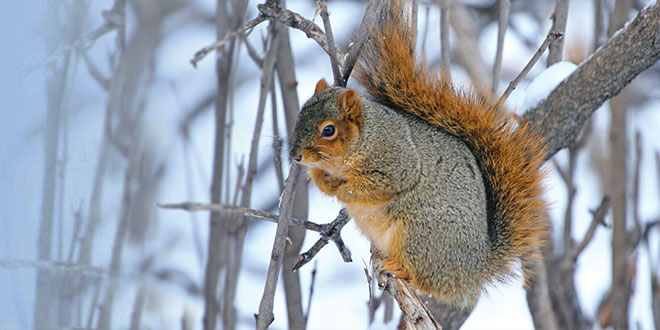 There are certain benefits to working for a wildlife agency, not the least of which is the opportunity to spend time outdoors enjoying what nature has to offer.

As the editor of New Mexico Wildlife, I’m afforded many chances to spend time in the field with a diverse group of individuals who have a boatload of knowledge about wildlife and habitat.

Above: A fox squirrel balancing on a small tree branch. Fox squirrels are larger and heavier than gray squirrels. USFWS photo by Gary Eslinger.

Among my favorite questions for these folks are: “What’s this?” and “What’s that?”

But, sometimes I’m alone walking a trail, hiking through the woods, or sitting by a lake. I’ve almost always got a camera hanging at my side hoping to capture an image and, if I’m fortunate, it’s a rather unique picture. On those occasions, I wish I had one of our experts along to help get a proper identification before filing the image in a digital photo library.

I’m always hoping for something that’s either rarely or never been seen in an area. Or, maybe something unexpected like having a jackrabbit, at full speed, emerge from the brush within six feet … followed closely by a coyote. What a great picture that could’ve been if I had my camera at the ready.

On occasion, I might get lucky and end up with a picture biologists find helpful. 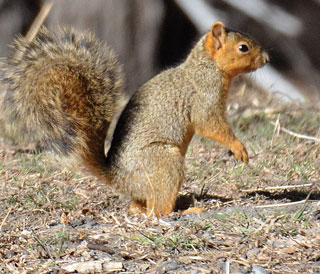 Most recently, in January, while photographing a turkey capture in Raton, a couple squirrels made an appearance. Never one to pass up an opportunity to continue building the photo library, I snapped away.

Identification was elusive. It looked like a fox squirrel, but my older field guides suggested it did not occur in the area. When I sent the photo to someone more knowledgeable, I received inquiries about exactly where and when the picture was taken.

Turns out it was a fox squirrel and researchers have been documenting its slow, but steady natural expansion into northeastern New Mexico.

While it might not always turn out to be something out of the ordinary, there are moments when you do see, and hopefully photograph, something just a bit unusual.

About the fox squirrel

Fox squirrels were introduced into southeastern New Mexico more than a half century ago, and today the species emergence in the northeastern portion of the state has researchers looking at the animal’s expansion.

In a paper authored by Dr. Keith Geluso, formerly with the University of New Mexico Department of Biology, humans, it is believed, are playing a role in the squirrel expanding its territory. Woodland areas along waterways have expanded for a variety of reasons, including fire suppression and altering the flow of waterways.

This has provided the necessary habitat for this tree squirrel and it is believed it has moved along the Purgatoire River in southeastern Colorado. From there it moved into northern New Mexico.

These are the largest tree squirrels native to North America, ranging from about 17 to 28 inches long with a large, bushy tail ranging from 8 to 13 inches.

While they have excellent vision, even at dusk, and a good sense of hearing and smell, these creatures are quite tolerant of humans and often are found in residential areas.

Strictly diurnal, fox squirrels have sharp claws that help them climb with ease. They’re also known to jump horizontally up to 15 feet and can free fall upwards of 20 feet.

Doing as squirrels do, they will store a cache of seeds, not always remembering the location of the secret hiding place. As a result, some of the seeds will grow, promoting the growth of trees.

Hence, along with human alterations to the landscape, these squirrels potentially can expand their range by planting new trees.