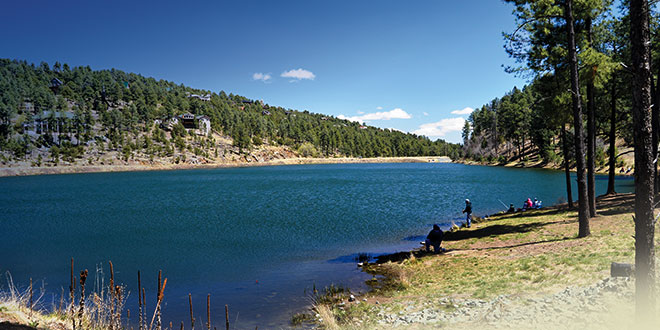 Many southeastern New Mexico anglers limit their efforts to hook a trout to the winter months when rainbows are stocked in small urban lakes. But, for those willing to take a drive into the mountains, yearlong opportunities exist to wet a line for these coldwater fish.

Above: In 2015, The New Mexico Department of Game and Fish worked with the Village of Ruidoso to open Alto Reservoir to stocking and anglers. Located about 4½ miles north of Ruidoso, Alto Lake has been stocked with channel catfish and rainbow trout. NMDGF photo by Mark Madsen.

Although limited, 12-month trout fishing opportunities exist at a couple locations in the cool pines of the Sacramento Mountains, where the Village of Ruidoso owns and operates a couple small reservoirs for use as municipal water supplies: Grindstone and Alto.

Located southwest of Ruidoso and west of Carrizo Canyon, Grindstone Reservoir has been stocked with rainbow trout by the New Mexico Department of Game and Fish for many years. This reservoir has remained a hot spot for trout fishing, despite water being drawn down so a liner could be placed on the dam to resolve the problem of numerous leaks.

That work was completed last fall and the reservoir’s water level is rising. Trout fishing has remained good-to-excellent and the stocking of rainbow trout continues, including during the summer months, provided water conditions remain stable and favorable for trout.

And, if rainbow trout aren’t among your favorite meals for dinner, Grindstone also contains a healthy population of channel catfish, smallmouth bass and bluegills. 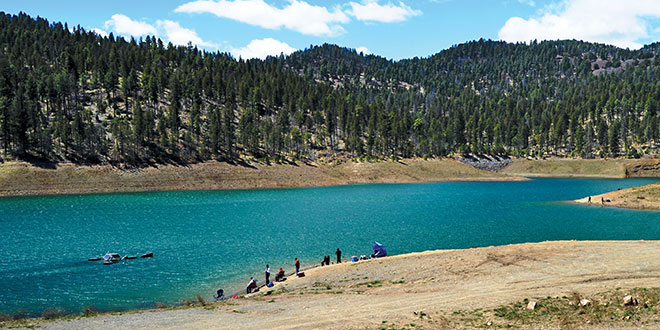 Above: Grindstone Reservoir, nestled in the cool pine forest of the Sacramento Mountains, offers anglers in the southeastern portion of the state opportunities to wet a line for rainbow trout. NMDGF photo by Mark Madsen.

While Grindstone has been open to fishing for many years, Alto Reservoir has not. It wasn’t until 2015 that this water welcomed anglers.

The reservoir approximately 4 ½ miles north of Ruidoso off Route 48 now is being stocked by the department. Initially stocked with channel catfish, Alto subsequently has received rainbow trout.

Alto had not been open to the public for many years, but last year the department worked with the Village of Ruidoso to open the lake and start stocking fish.

Roddy Griego, director of the Ruidoso Parks and Recreation Department said the village has big plans for Alto Reservoir. The village owns a couple of hundred acres east of the lake and plans to put in hiking trails and expand outdoor-related activities.

The latest fishing reports indicate that trout fishing at both lakes has been good and anglers continue to catch trout using typical baits: various colors of Power Bait, salmon eggs, worms and small lures, including Panther Martins and Kast Masters. 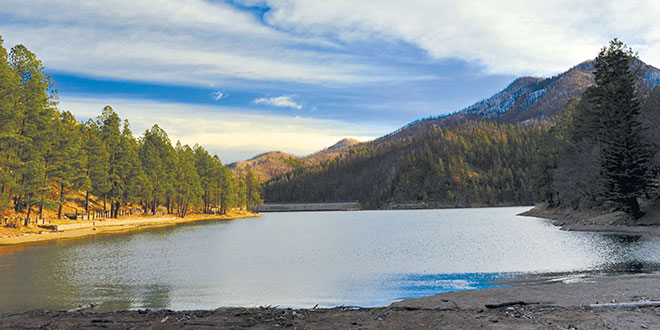 Bonito Lake, a popular trout fishing lake near Ruidoso, closed in 2012 after the Little Bear Fire. Reclammation work is scheduled to begin this fall. Photo by Karl Moffat.

Bonito Lake, owned by the City of Alamogordo, remains closed due to the after effects of the 2012 Little Bear Fire. Work is scheduled to start on the lake in the fall. The lake will be drained and dredged to remove ash and debris and work on the dam will also be completed.

City of Alamogordo officials hope to reopen the lake to the public sometime in 2018.

The next time you decide to head to the cool pines of Ruidoso, throw in a fishing pole or two and try some trout fishing at one of the reservoirs.

Mark Madsen was the Public Information Officer in the Southeast Area for the New Mexico Department of Game and Fish.