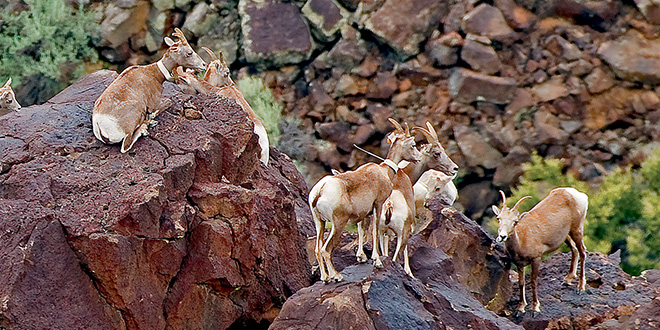 Wildlife agencies across the nation have many success stories to share when it comes to restoring wildlife populations.

Sometimes the wildlife get much of the credit.

That’s been the case in the Rio Grande Gorge, where a few dozen Rocky Mountain bighorn sheep released in 2006-2007 have multiplied to a population of 280 in 10 years.

With exceptional vision and climbing ability, steep rocky terrain is the ideal habitat for Rocky Mountain bighorn sheep. Since being introduced into the Rio Grande Gorge, bighorn sheep have adapted well and their population has grown from 48 to about 280. NMDGF photos by Dan Williams.

Bighorn sheep were absent from the gorge until 2006, when the Taos Pueblo released 23 onto the landscape. The Department of Game and Fish followed with the release of 25 additional bighorns in 2007.

No augmentations to the population have taken place since. 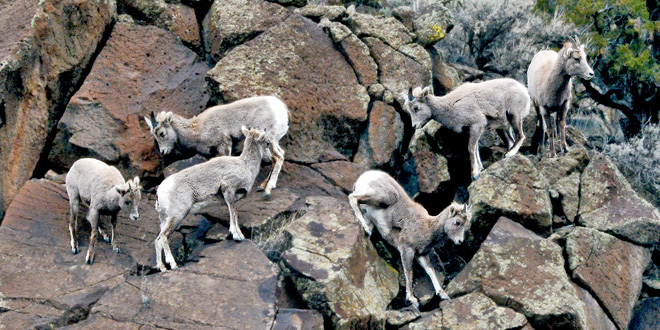 Bighorn sheep thrive in areas with steep, rocky terrain, which can be found in abundance in the gorge along with a year-round water source.

“Combine these benefits with the sheep adapting quickly and you have a true success story.”

The bighorns spend most of their time in the canyon proper and above the canyon on mesa tops. When outside the gorge, they generally stay close enough so they can retreat to the safety of the canyon. Bighorn sheep have exceptional vision and climbing ability.

“This is especially the case in areas with more human traffic,” Ruhl said.

The growing bighorn herd is a positive sign in the ongoing efforts to restore the species in New Mexico. The rebounding population provides both hunting and watchable wildlife opportunities.

“Hunting dollars provided the means to restore this population and will continue to support conservation efforts such as this,” Ruhl said.

The department issued four licenses for bighorn rams in the gorge this season. Because rams mate with many ewes, female bighorns, removal of a few males has virtually no impact to the overall population.
And now opportunities exist for those wishing to view and photograph these majestic animals.

While getting photographs of this animal is al-ways exciting, having an opportunity to witness two rams in the rut is a memory that will last a lifetime. The slamming of heads is a violent act as the two animals charge at speeds around 20 mph. The sound of the collision can be heard up to a mile away.

Mating season for low-elevation Rocky Mountain bighorns runs from November to December, meaning the time is approaching to get the camera ready. During this time of year, rams battle for dominance and access to the females.

While there are no guarantees with wildlife, there are a number of areas accessible to people wishing to catch a glimpse of these animals.

A good area to view bighorns is the West Rim Trail that extends from the rest area west of the Rio Grande Gorge Bridge on U.S. 64 and runs south along the canyon rim to Route 567 above the Taos Junction Bridge.

Minimizing disturbance and stress on the animals is important. The normal escape route for bighorn sheep is upward, but along the West Rim Trail, most opportunities to watch the animals is from above, so maintain a good distance. If encountered along the canyon rim and a bighorn begins to run, do not pursue.

A pair of binoculars is essential for long-distance viewing. Photographers will get the best shots with a telephoto lens and a tripod.