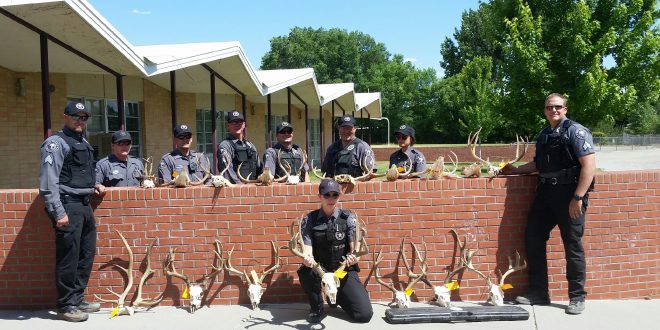 During the 1970s, most state game and fish departments worked under the misconception that poachers were not criminals. A majority of the public at the time still excused the game violator by continuing to believe that they only poached to “feed their family” or that the level of the illegally killed game was insignificant. In 1975, the Department initiated a study to determine how significant poaching was in New Mexico.

After the research project, it was clear that the out-of-season deer kills were quite significant. It was estimated in the neighborhood of 34,000 deer were poached every year in New Mexico. Similar studies in other states produced comparable results and indicated there were as many deer being killed illegally as legally. The game violator attributed his success in avoiding apprehension to two primary reasons: the officer’s districts were too big, and the Department wasn’t getting any help from the public.

The OGT hotline is set up to take information 24 hours a day, seven days a week, to ensure that we capture any details someone may have about a wildlife crime or violation. All calls to OGT are confidential, and the reporting individual has the option to remain anonymous.  If you are unsure you witnessed an actual violation, the best thing to do is report it and let us decide.

How does the system work?

The program receives, on average, 200 calls per year, with the average payout being $485 per reward, although not every caller wants to receive a reward for calling in.

If you suspect a wildlife crime has occurred, please call Operation Game Thief at 1-800-432-GAME (4263), or visit www.wildlife.state.nm.us.  Remember, poachers are stealing your wildlife.