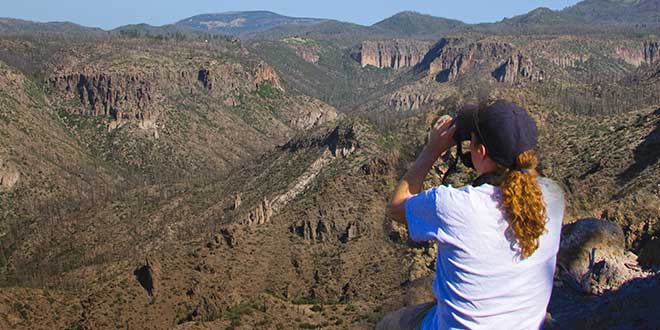 The day starts this early because bighorn sheep are easier to locate when the temperature is cooler, Ruhl explained. In about an hour, she will begin the department’s annual Rocky Mountain bighorn sheep survey in Cochiti Canyon.

“Once it’s hot they bed down,” she said. “It’s easier to find them when they’re up and moving around.”

The canyon, located in the Jemez Mountains on U.S. Forest Service land a half-hour south of Los Alamos where the Rio Grande forks, is home to possibly 150 sheep. Ruhl doesn’t expect the team to count all of them; she is hopeful they will record the presence of 80, maybe 100, depending on the temperature and how far beyond the canyon area the sheep have roamed.

This is the department’s third official Rocky Mountain bighorn sheep survey since moving 45 sheep from Wheeler Peak in 2014 a few years after the 2011 Las Conchas Fire—the largest fire in New Mexico history at the time—that burned over 150,000 acres. In 2017, an additional 33 sheep were relocated from the Questa Mine in the Red River Canyon.

Surveys are conducted on the ground with telemetry receivers that detect the radio-collars attached to the sheep. The herd—referred to by some as the Jemez herd, by others as the Cochiti herd—seems to be thriving in the canyon. Surveys have mostly been conducted on the ground; however, as the population increases, the biologists may need a helicopter.

During the 2017 ground survey, 65 sheep were observed and in considering known mortalities and additions through births and transplants, the team estimated the population to be 105-115, Ruhl noted.

Passing a security checkpoint in the national laboratory town of Los Alamos, Ruhl takes a Forest Service road to the canyon. At daybreak, herds of elk, another big-game species that thrives in the area, can be seen on both sides of the road.

Ruhl has been with the department for four years, spending most of her time as one of the statewide bighorn biologists. Originally from Wisconsin, she developed a passion for the outdoors as a child despite growing up within five miles of downtown Milwaukee. Her father toted her along on all of his fishing and camping trips; in fact, she said, the household policy required that summer days were spent outside.

She always had an interest in studying large mammals. Before joining the department, she worked as a wildlife technician at Yellowstone National Park.

“I stand by the notion that I must have one of the best jobs in the state, if not beyond,” she said. “I enjoy so many components of the work, but especially relish days spent encountering bighorn on the ground.”

The annual survey is critical; estimating the bighorn population helps ensure the released herd is thriving in the canyon. The team also needs to detect any signs of disease transmission between domestic and wild sheep, one of a handful of culprits including unregulated hunting that are thought to have eradicated the canyon’s sheep population around the turn of the 20th century.

Rominger has been a wildlife biologist since 1978. For most of the last 40 years he studied two species—federally endangered woodland caribou in the Selkirk Mountains of northern Idaho and southeast British Columbia (the animal is now functionally extinct) and bighorn sheep in New Mexico.

Around 6:30 a.m., the team pulls over at the fork of the canyon. Rominger and Ruhl raise up their telemetry antennas and listen for collars emitting radio signals from nearby sheep. The radio receiver can detect a line of sight signal from many miles away. In the Jemez, radio collars generally have to be in the same canyon and/or within a couple of miles to detect them with telemetry equipment from the ground, though they may be detected from many miles away if unobstructed by terrain.

The team stands on the rim of the east side of the canyon surrounded by scorched ponderosa pine trees, one with old lightning scars. Precipitation conditions are worse than they were in 2011, Rominger noted. The threat of another fire has agencies on edge. For the sheep, however, fire means better habitat.

Cleared of trees, the canyon becomes an open habitat, improving visibility for the sheep and helping them evade predators such as mountain lions and coyotes, he explains. Bighorn bed—or sit in place—on open slopes that offer protection.

“It’s their defense, having an open space,” he explains. “In the short term, fire displaces them but long term, it creates the best habitat for them. You don’t sit in a brush pile where bears and coyotes can get you. Sheep bed where they have good visibility.”

Also, post-wildfire, the land is left with nutrient-rich soil, perfect for the sprouting of new plants including shrubs and grass for the sheep to consume.

Deep in the canyon, the team spots eight sheep— four ewes and four lambs. “A good ewe-to-lamb ratio,” Ruhl said. It’s a sign the herd is thriving in the canyon.

As the morning wears on and the air temperature rises, the team moves around the canyon, telemetry equipment and binoculars out, scanning for the recognizable white rumps of bighorns. At another point they spot more sheep, this time five rams bedded together, almost undiscernible against the tan and grey terrain below.

More than 1,500 Rocky Mountain bighorn sheep currently roam New Mexico from the Gila River in the southwest region of the state to Dry Cimarron in the northeast where a tri-state herd roams Colorado, Oklahoma and New Mexico. 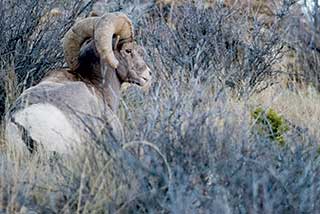 In the southern half of the state, desert bighorn— a subspecies closely related to the Rocky Mountain sheep—have also been reintroduced. The current population is about 1,300.

The department also operates an outdoor captive facility in Red Rock in the southwest corner of the state. The facility, founded in 1972 with 18 desert bighorn from the San Andres Mountains and Mexico, today contains just over 100 animals. It has been paramount to the recovery and reestablishment of wild desert bighorn in New Mexico by providing over 457 desert bighorn sheep for transplant into the wild, Ruhl said.

The herd grew large enough to support limited hunting and translocations to the Pecos Mountains and San Francisco river area, but it went extinct in the early 1990s. Because none of the animals were collared, the cause is unknown.

Returning the sheep to the canyon—and to the entire state— is a decades long effort for not just the Department of Game and Fish, but partner agencies including the Cochiti pueblo, Forest Service, the National Parks Service and Bureau of Land Management as well as the Wild Sheep Foundation and the New Mexico chapter of the Foundation.

The financial commitment is also significant and comes from a variety of sources. The bighorn program operates on somewhere between half a million and a million dollars annually, Ruhl said. While some resources come from the Big Game Protection Fund, the primary funding source for the bighorn sheep program is the Bighorn Enhancement Fund, which contains monies generated from the annual auction and raffle of four total bighorn ram permits.

Over the past five years, annual gross proceeds derived through the enhancement program has averaged $470,000.

When considering the reasons for sustaining the program, there are different perspectives to take into account, said Ruhl. 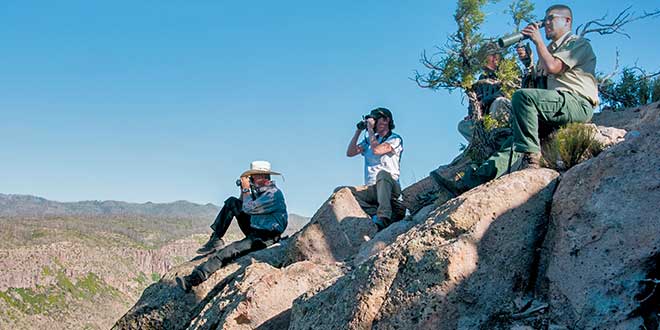 Staff from the Department of Game and Fish and U.S. Forest Service use binoculars to locate bighorn. Photo by Martin Perea.

There was an interest in restoring the sheep to the Cochiti canyon area, Ruhl said. The animals were a familiar sight for the local Cochiti people, who wanted to bring the sheep back. In an interview, Kai-T Blue-Sky, a wildlife biologist with the Cochiti Pueblo Department of Natural Resources and Conservation, said he believes the return of bighorn to the canyon will help mend the scars that remain following the 2011 fire.

“The bighorn sheep are an added component to the rejuvenation of the land,” he said.

Biologists and ecologists feel responsible for restoring animals to their native range. “As humans we caused this decline,” Ruhl noted. “It is our responsibility to ameliorate the situation as best we can.”

From the sportsman’s perspective, the sheep provide a future potential hunting opportunity, Ruhl said.
At a state game commission meeting in 2018, Stewart Liley, chief of the wildlife management division at the Department of Game and Fish, said the department is still a few years away from permitting a bighorn hunt in Cochiti.

The department most likely won’t initiate a full-on hunt in Cochiti until 2023–25, Liley said. Rams are usually harvested at eight years old and older; the Cochiti herd is big enough to permit a hunt but the rams are still too young.

In the future, Liley noted, the Cochiti herd could very well become one of the largest bighorn populations in the state; the habitat could potentially support 500 sheep.

Although this year’s survey results were disappointing with only 15 sheep actually observed by the team, the future of the herd appears promising.

Ruhl explained that traditional ground survey methods in the Jemez were less effective this year due to high temperatures early in the day that limited sheep activity, as well as the general expansion of the herd into adjacent habitat that was not searched.

“We were encouraged by the high lamb-to-ewe ratio,” said Ruhl. “This, combined with the normal mortality level we’ve seen on radio-collared animals, leads us to predict this herd is stable to increasing.”

Above: Staff from the Department of Game and Fish and U.S. Forest Service use binoculars to locate bighorn.

A subspecies closely related to the Rocky Mountain sheep, the desert bighorn sheep also neared extinction by the early 1900s.

Like their close relative, desert bighorn can be identified by the characteristic white patch on the rump. The rams are crowned with a large set of horns in contrast to the much smaller horns of ewes, adolescent males and lambs.
Their coats are generally buff brown but the color can vary from pale cream to dark chocolate.

Both Rocky Mountain and desert bighorn require open country with mountains or canyons that provide “escape terrain,” or steep cliffs with 60 percent or greater slopes.

Shrubs are the predominant diet, but desert bighorn eat a variety of plants and prefer new grasses and forbs (flowering plants) that sprout during summer and fall rainy seasons.

“The diets of all bighorn, regardless of subspecies, will vary according to what is locally available,” said Caitlin Ruhl, bighorn biologist with the Department of Game and Fish.

For example, unlike Rocky Mountain bighorn, a favorite delicacy of the desert bighorn is the pulp of prickly pear cacti, which desert bighorn reap by scraping off the spines with their horns. 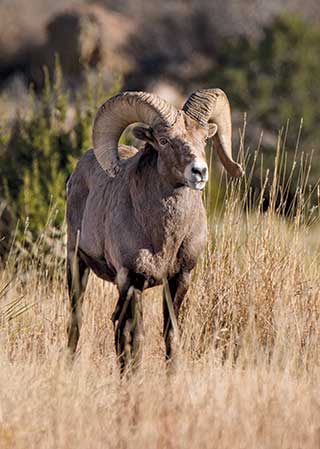 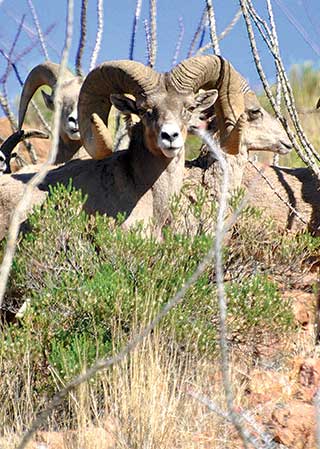 Other notable differences between the Rocky Mountain and desert bighorn: