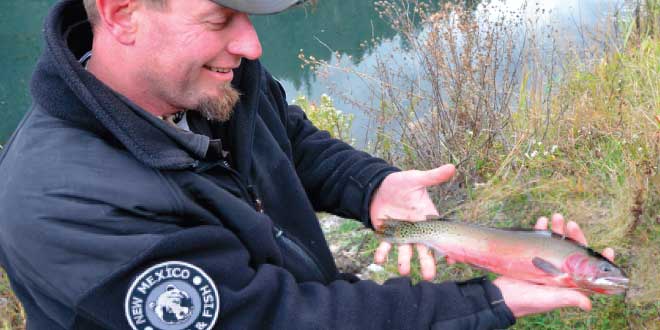 “Primarily, our main focus is on recovery of the species,” said Jacobson. “They’re going into areas where all of the nonnative trout have been removed. In a lot of cases barriers have been put in place to prevent the nonnatives from getting back in there. We don’t want to raise a rainbow trout alongside a cutthroat in case there’s some mixing… you would just lose a lot of work in one restocking event.”

Anytime you’re working with wild strains of native stocks of fish there are unique challenges.

“A lot of the fish raised in hatcheries today are from domesticated strains,” he said. “They might be triploids (three sets of chromosomes), for example. Our hatchery populations are all wild strains, some first generation in hatchery straight out of the stream.”

Fish raised from wild strains tend not to tolerate real high densities that domesticated fish could, he explained. The hatchery raises cutthroat at low densities to ensure their survival and best obtainable health.

Alexa Henry is the editor of New Mexico Wildlife. Tristanna Bickford is the communications director with the Department of Game and Fish.
Share