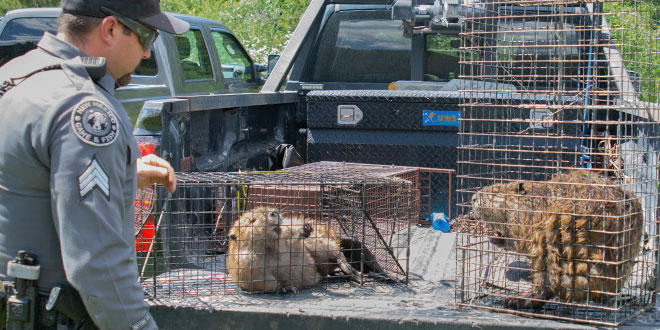 In New Mexico, if there is permanent water with deep pools and the right kinds of riparian vegetation, there is a good chance beavers are hard at work making that place home.

As ecosystem engineers, beavers can have significant impacts on the hydrology of a stream or river as they create habitat beneficial to them. Beavers build dams that slow water flow and increase sedimentation, which in certain landscapes can restore floodplains and lead to the creation of aquatic and wetland habitat. However, this behavior that alters the landscape can also interfere with or disrupt human endeavors in the same areas. Beaver dams can flood low-lying areas, erode roads, block irrigation ditches and cause flash flooding if dams fail.

Above: Sergeant Shawn Carrell of the Las Vegas Supervisory District assisted with capturing two beavers from a private pond in Ledoux near Morphy Lake State Park.

For these reasons, the Department of Game and Fish has a number of approaches for mitigating the impact that beavers might be having on a landowner’s property. The strategy used will depend on habitat, landscape and social tolerance. Non-lethal and lethal control measures, like pond draining devices or removing the beaver, can be temporary solutions. However, if the waterbody is connected to other waterbodies that have beavers, then dispersing individuals from other areas are likely to show up in the area where beavers were removed.

Usually, some combination of short-term abatement techniques coupled with the long-term approach of educating landowners and increasing tolerance solves the immediate issues while encouraging persistence of beavers on the landscape.

The Department has recently been making strides in regards to using relocation as a beaver management strategy, specifically to restore beaver in areas that historically supported, and can currently support, a beaver population. A number of landowners and land management agencies have contacted the Department to discuss the possibility of introducing beavers to their property. Department staff have conducted habitat assessments, and in certain cases found that the habitat and neighboring landowners would support having beavers.

This summer, Department biologists and conservation officers have successfully relocated beavers for the first time in recent years. These beavers have been fitted with radio transmitters to follow the success of these reintroduction efforts. Beaver restoration efforts have so far been focused on northern areas of the state, where beaver habitat is more abundant. However, the state is in the beginning phases of planning to assess and identify beaver habitat and occurrence statewide, potentially identifying new locations where beaver could be restored.

The Department prohibits the public from moving wildlife for a number of reasons, including: health and human safety concerns, potential for disease transmission or invasive species spread, and animal welfare concerns. Relocation of wildlife requires careful planning and knowledge of capture and handling techniques to minimize the harm to the transferred animal.

Nicholas Forman is the Carnivore and Small Mammal Program Manager for the New Mexico Department of Game and Fish.