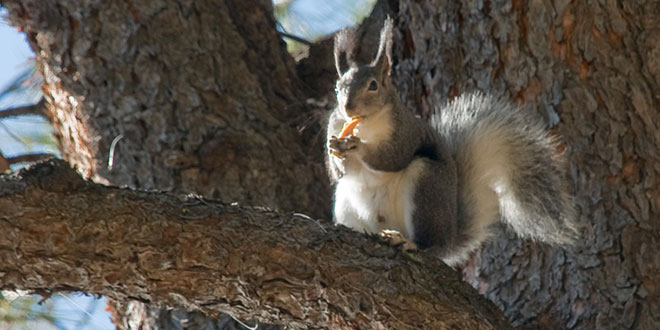 Have you ever considered small game hunting in New Mexico? Specifically, squirrel hunting? If not, you probably should. Everyone that put in for the big game draw will own a game-hunting license, which includes small game like squirrel. In addition to this license, you will need a habitat stamp and a habitat management and access validation stamp. Altogether, this will cost $25 for a resident adult. These loud aerial acrobats are fun to observe and listen to. They often bark out alert warnings when you get too close and are the perfect quarry for beginners and younger children practicing scouting and stalking skills. Squirrels are often found within a half mile hike of any forest road, so don’t plan on hiking very far. In addition to the pursuit experience, squirrels are wonderful table fare. Squirrel meat has a lighter taste, often compared to chicken.

There are four species of squirrels to hunt in New Mexico. These include the Abert’s, fox, gray and red. They require different habitat and can be found in varied locations around the state. Here is a list of the common destinations to find our four squirrels:

1.) Abert’s squirrel – also called tassel eared, because of its long, furry tufted ears. Their bodies are gray to dark brown with a red streak down the back. They rely on Ponderosa pines and can be found in the Manzano and Jemez Mountains.

2.) Fox squirrel – largest of the four; it has a golden-brown body. It can be found in pecan and walnut orchards near Roswell and Carlsbad. Additionally, it lives in riparian areas along the southern Pecos river.

3.) Gray squirrel – grayish brown in color with a white underbelly. They live in mountain mid-elevations, in broad leaf riparian habitat. Grays are found in the Gila National Forest in Catron, Grant and Luna counties.

4.) Red squirrel – also called Chickaree, it is the smallest of the four. Their predominant habitat are spruce and fir trees. They can be found in the Sangre De Cristo, San Juan, Sacramento, Capitan and San Mateo mountain ranges. 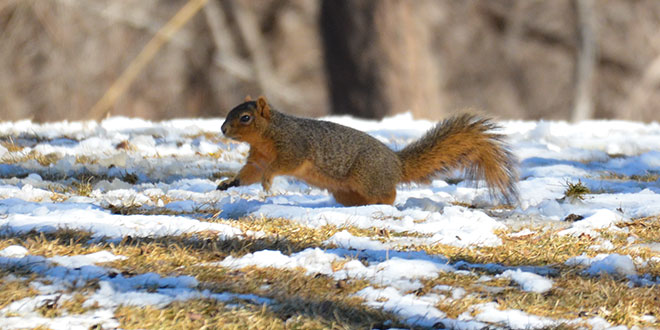 Squirrels may be legally hunted with a variety of arms, including: .177 caliber and larger pellet guns, shotguns, rim fire firearms, muzzleloading firearms, bows and crossbows.

A good hunting pellet rifle can be found for under $100 nowadays. Check with the manufacture to make sure your pellet rifle muzzle speed is 1,100 feet per second or more. Pellets will also be needed, and these can be purchased for about $5 for 250. Lastly, a good sharp knife or game shears are required to skin and quarter the squirrel. These can be picked up for approximately $15.

So, with the game hunting license and stamps, pellet rifle, ammunition and knife, you would have all the essential gear need to hunt squirrel for under $145.

Here is some non-essential gear you may consider:
1.) Camouflage clothing including hat, pants, shirt and boots
2.) Global Positioning System unit or a good land access application for your cell phone
3.) Binoculars
4.) Backpack
5.) Food and water
6.) Compass and map

The bag limit for small game is much more liberal than for big game, and squirrels are no exception. Each legally licensed hunter can harvest a maximum of eight squirrels per day, known as a bag limit. The possession limit is 16 squirrels — this is the maximum number each hunter can have in the freezer. Remember to consume some squirrels if you are at the possession limit before going squirrel hunting again. A good rule of thumb is to consume game meat within six months after freezing to reduce the risk of freezer burn.

Besides the liberal bag limit, the season to hunt squirrels is quite long. They can be hunted for three months, statewide, in the fall. A hunter may pursue squirrels from September 1 through November 30 each year. That makes for a lot of potential family weekends when both parents and children are off work and school to hunt squirrels. By far, the best time of day to hunt squirrels is early morning and late afternoon, when the squirrels are most active.

There are two main ways to hunt squirrels. The first is called still hunting. You locate the trees squirrels prefer, sit down, preferably behind some cover, and wait for them to move or make noise. You are looking for a moving brownish or gray main body attached to a bushy tail, a branch moving in a tree or for litter falling from a tree. The sounds you may hear include chatter, disturbed leaves on the forest floor or the grinding noise a squirrel makes with its teeth on a nut. Once you spot a squirrel, wait for it to quit moving before shooting.

The second way to hunt a squirrel is by stalking. Stalking involves moving quietly through the forest, a few steps at a time, while looking and listening. Pausing for ten seconds can be productive to conceal your outline and allow the squirrel to reveal its hiding place. Whether in a tree or on the forest floor, always attempt a headshot as this will preserve the most meat and is the most humane location to aim for. 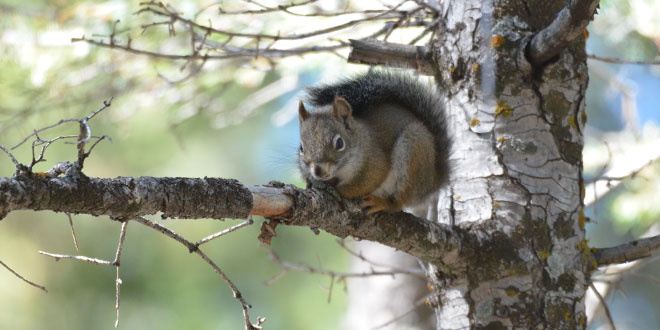 Once you have harvested a squirrel, they are easy to clean. Cut off the squirrel tail at the base. Make sure the cut is straight down and then liberally salt the base of the tail and lay it flat to dry. Squirrel tails can be sold or traded for lures to the Mepps fishing lure company. They make in-line spinners out of the hair. Remove the head and all four feet just above the joints. Make a circular incision around the mid-torso, belly area, being careful not to puncture the internal cavity. Work your fingers under the cut skin along the backbone, to loosen and then pull skin up and down from the belly. It should come right off. Make a straight cut from the anus through the pelvis, all the way to the neck. Insert one or two fingers into the chest cavity and pull out the entrails. Both hind legs can be removed from the torso at the hip joint and stored in a freezer bag. The front legs stay attached to the torso and go into a different freezer bag.

The next time you are considering a fall weekend activity, give squirrel hunting a try. You can’t go wrong hiking through the autumn woods, whether you harvest a squirrel or not.

Method:
Parboil the squirrel pieces till tender, about an hour. This is done in a large pot, covering the pieces with water mixed with two tablespoons of salt. Simmer on low heat. This will ensure even meat from an older squirrel is tenderized. Remove from water and pat dry with paper towels. Liberally shake pepper, salt and paprika on both sides of the dried squirrel pieces. Cut 10 butter squares and scatter on individual pieces. Place in a single layer in a baking dish and put inside a 350-degree, preheated oven. Cook until golden brown, about one hour.

John Martsh is the Recruitment, Retention and Reactivation Program Manager for the New Mexico Department of Game and Fish.