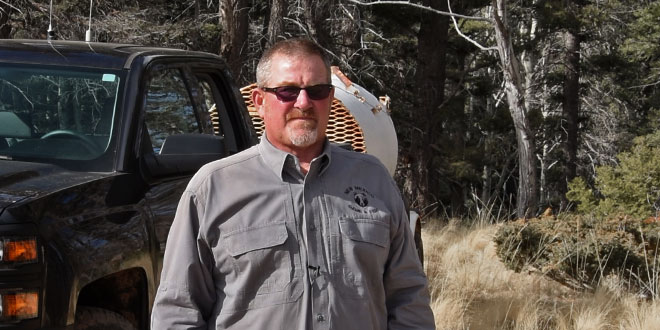 New Mexico is home to approximately 8,000 black bears. Every year, a couple hundred come in contact with humans; most encounters are uneventful, but encounters can result in the destruction of property or injuries to both bears and people.

In an interview with New Mexico Wildlife, Rick Winslow, bear and cougar biologist at the Department of Game and Fish, answered questions about the bear population in our state and gave tips on how humans and bears can coexist without conflict. 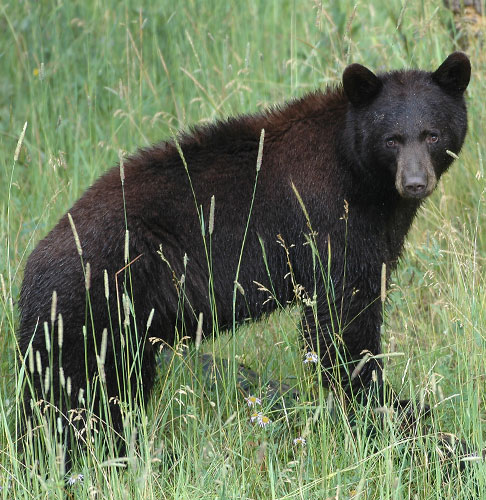 Banner photo: Rick Winslow has been a bear and cougar biologist with the department since 2003. Department photo by Martin Perea.  Inset photo: Black bear: Department photo by Dan Williams.
?How can I keep bears away from my property?
The simplest answer is not to have anything that will attract a bear. Fruit trees are generally the biggest thing. If you have ripe apples, peaches or apricots and you’re very close to bear habitat, you’re going to have bears visit. You can harvest those fruit right as they’re starting to ripen—not waiting until they are ripe and are falling on the ground, because once they fall on the ground they’re rotting.

?What should I do if I see a bear in my yard?
Consider what it’s doing. If it’s just passing through and if you have a water feature in your yard and it’s the middle of the summer and its stopping for a drink, hopefully it will travel on. If it’s hanging around, you need to figure out what the attractant is, why is it staying there, what is it doing and find a way to remove the attractant.

They’re not there to bother you and get into your house. They’re there to forage naturally. If it’s foraging, leave it alone, let it go. It will move on.

?What factors affect their hibernation cycle?
There are a variety of factors that determine exactly when a bear will go into hibernation. One of the biggest factors is how good the fall is for bears. How fat they are in the fall, how much food they manage to put in and eat. It’s a little counter-intuitive. If there’s nothing to eat, it makes more sense for them to go to sleep. If there’s tons to eat, at some point they saturate their ability to incorporate more. They can only gain so much weight and they’ll go to hibernation reasonably early. Female bears, especially female bears that are going to have cubs, will go into hibernation early. They can go in late September or early October. Whereas male bears, if there’s still food on the ground, may stay out until December.

Some male bears, particularly in the southern portions of the state, and at lower altitudes, may not hibernate much, or at all. Since there is food available all year in some of those areas (juniper berries, cactus fruit, mesquite beans, etc.) male bears and younger, non-breeding bears, don’t necessarily need to hibernate.

?What do bears usually eat throughout the year? How does their diet change from season to season?
They eat anything they can. If it has nutrition, bears will eat it. When they get out of hibernation, they generally tend to eat green grasses and forbs—all the little things that aren’t grass such as dandelions and purslane. That’s what they eat initially. After that, bears sort of enter the worst time of the year for them. As those grasses and things like that dry up, as it warms up and the snow recedes, and as the moisture dries up for the year, they move to insects. They do things like tear up logs, roll rocks, eat ants and beetle larva and whatever little critters they can find underneath those and inside of those logs and rocks.

As fruit starts to develop in the summer they start eating fruit, moving into what we call soft mast. Any fruit is soft mast. Then they move to hard mast as it develops, acorns, pinion nuts and juniper berries. Even though juniper berries are a berry, they’re a strange berry and fall between hard and soft mast. Juniper berries can be very important. There are areas of the state where there is not a lot to eat other than juniper berries and the bears eat a lot of them. We also have bears that are very desert adapted. Prickly pear fruit, agave fruit, mesquite beans. All of these things are edible and sources of nutrition for bears.

?Why do bears wander into urban areas? I thought they’re afraid of humans.
Naturally, bears are afraid of humans. We represent something that is dangerous to them and they are aware of that. However, they get used to us over time, particularly bears that have been taught by their mothers or by being around humans from time to time that we are not as dangerous as we may appear at first. And they just get used to us. They become habituated to human presence and they stop worrying about it. This is why we continually say a fed bear is a dead bear. Don’t feed the bears because when you feed them and they start to look at us as a source of nutrition, that’s when problems begin and more conflict occurs. ?I like having bird feeders on my property but I heard they can attract bears. Do I have to get rid of my bird feeders?
No, you don’t have to get rid of them, but we do recommend taking the feeds inside each night. There’s plenty of wild food for birds in the summer time, grass seeds, plant seeds… all of these things the native and natural food birds are eating in the first place are more than adequate for them. We supplement that food by feeding them bird feed such as bird seed and installing hummingbird feeders. Hummingbird feeders are like a can of Pepsi or Mountain Dew for a bear. But they don’t need that. If you provide it during the time when those birds are here they will tend to stick around more and they will make a mess. Remember to only put out enough bird food to last throughout the day and to move your bird feeders to a secure area inside at night.

If I see a bear in an urban area, how do I report it?
The best thing to do is call the Department of Game and Fish between 8 a.m. and 5 p.m. on weekdays. If game and fish is not available and it’s not during those hours when we are open, call your local sheriff or state police. The State Police serves as our dispatch.

Bears that are accustomed to receiving food regularly from humans and do not get that food as expected, may go looking for different sources. If you have information about someone who is feeding bears, or other wildlife, call Operation Game Thief at (800) 432-4263. Callers can remain anonymous.