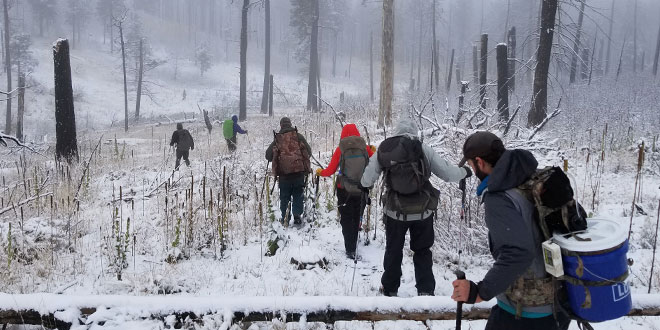 On June 26, 2011, at approximately 1:00 pm, a tree fell on a power line causing one of the largest and most devastating fires in New Mexico’s history. On the first day alone, the fire burned 43,000 acres a rate of about an acre per second. By August 3, almost two months later, the fire was 100 percent contained and efforts were underway for recovery of the burned areas. When it was all said and done, the fire consumed more than 150,000 acres.

Above: Volunteers transport fish in backpacks into Frijoles Canyon. Over 30 volunteers assisted with the restoring effort. Department photo by Tucker Brauer.

Almost three months later on August 21, destructive flooding occurred in the burned region as the result of a monsoon rainfall. One of the places that got hit the hardest and suffered detrimental flooding was Frijoles Canyon, which was formed through erosion thousands of years ago by the Rito de Los Frijoles.

“In addition to wiping out the nonnative fish population, the Las Conchas Fire and the ash and debris flow following it did a lot of damage to fish habitat in the Rito de Los Frijoles,” said Tucker Brauer, Rio Grande cutthroat trout biologist for the New Mexico Department of Game and Fish.

Fast forward to 2018, after eight years of natural recovery and re-seeding efforts to help stabilize the scoured ground throughout the entire fire perimeter, the Rito de Los Frijoles had recovered enough that department biologists determined it was time to restoring the creek with native Rio Grande cutthroat trout. This was not only due to many years of recovery from the fire, but also many years of planning and coordination with the National Park Service at Bandelier National Monument. “We spent a considerable amount of time confirming that no nonnative fish remained in the stream before reintroducing the native Rio Grande Cutthroat Trout,” said Brauer. 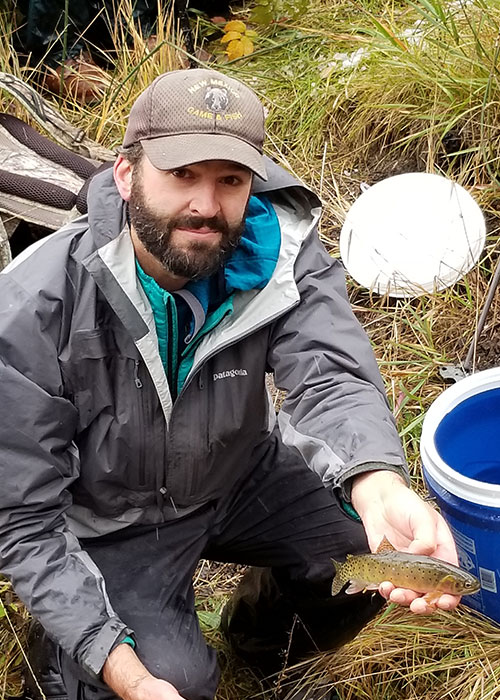 The trout for this project were collected on October 30, 2018, in the head waters of the Rito near Canjilon using backpack electrofishers, and transported to Bandelier National Monument in an oxygenated stock tank. Once the fish arrived at Bandelier, they were held overnight and monitored to make sure they would be suitable for the restoration effort. The next morning, October 31, the fish were placed in backpacks and hiked into various sections of Frijoles Canyon, but most of the restoring was focused on the upper sections of the Rito De Los Frijoles.

In total, 306 pure Rio Grande cutthroat trout were released into the Rito De Los Frijoles thanks to the help of the National Park Service at Bandelier National Monument and volunteers from New Mexico Trout and Trout Unlimited. Projects like this not only take years of planning, but are only possible thanks to joint efforts from multiple agencies and endless help from volunteers.