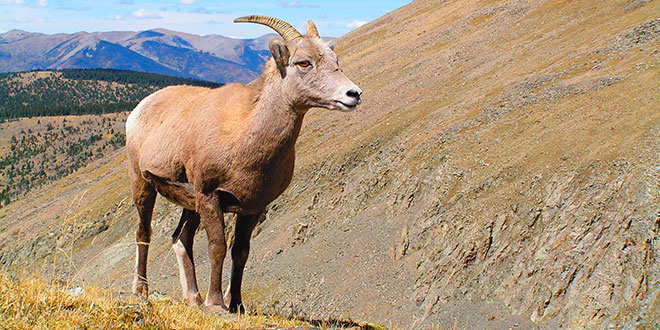 There are times when words appear to paint a rosy portrait, but upon closer inspection the painting is found to be a forgery.

Such is the case in the Pecos Mountains, where more is not always better.

Above. While forage is readily available in the Pecos throughout most of the year, bighorn sheep are dependent on wind-blown areas clear of snow during the winter months. Wildlife biologists believe the population should be maintained at approximately 350 animals to avoid a potential die-off from starvation due to a lack of available food. NMDGF photo by Clint Henson.

The most recent surveys in the Pecos Wilderness Area in Game Management Unit 45 identified a minimum population of 342 Rocky Mountain bighorn sheep. Because not every bighorn on the landscape can be counted, New Mexico Department of Game and Fish wildlife biologists estimate the total population between 350 and 400.

“This year’s survey documented the largest number of bighorn sheep in the Pecos since 1996 and the 99 rams are the most we’ve ever seen,” said Stewart Liley, chief of the wildlife management division for Game and Fish.

The news may sound wonderful, but alarm bells started to ring as personnel began examining the available habitat during the winter months.

There is plenty of available forage during the summer, but when snow begins to blanket the ground, sheep are left to feed in areas where food remains accessible.

“Having a growing, vibrant population is good news, but the available habitat during the winter is a concern,” Liley said. “At this time of year, the sheep are confined to wind-swept areas that are free of snow.”

After careful consideration, wildlife biologists determined the population should not exceed approximately 350 animals. As a result, Game and Fish increased the number of available licenses in the Pecos.

“This will mark the first year the department will allow the harvest of ewes in the Pecos,” Liley said.

Due to concerns of overpopulation on winter range habitat, this fall there will be 30 ewe licenses in the Pecos, three for youth hunts and 27 for adults.

“With the population estimate above 350, we need to use legal harvest as a management tool,” Liley said. “The goal is to stabilize the situation and hopefully avoid a future die-off from starvation.”

The concern is the carrying capacity, which is the maximum number of animals a particular area can support before the available resources, such as food and water, can no longer sustain that population size.

“We have to do something,” Liley said. “We believe a small reduction in the population is critical at this time to avoid a large-scale die-off. If the bighorn overshoot carrying capacity, the consequences can be disastrous. If nothing is done, it’s possible a substantial number of animals could be lost.”

When the available resources have been depleted, other factors can impact a population.

“When forage becomes scarce, it can result in a stressed herd and this can lead to disease and increased infighting for limited forage resources,” Liley said. “In the end, the results are not favorable.”

There are also 10 ram licenses available in the draw, but removal of a few rams will do little to control the overall population.

Because rams mate with multiple females, legal harvest of males has little to no impact on the overall population and there has been limited natural predation on bighorn sheep in the Pecos. Nearly every ewe, however, will have a lamb, so removal of a small number of females will help maintain an appropriate population

“Along with managing the population, the hunt provides an opportunity for families to fill their freezers with healthy meat instead of allowing animals to die on the landscape, the result of starvation,” Liley said.
The aim is simple: remove a few to benefit the many. If successful, the bighorn sheep population in the Pecos will continue to prosper, with the hunting dollars then used to further sheep conservation throughout the state.