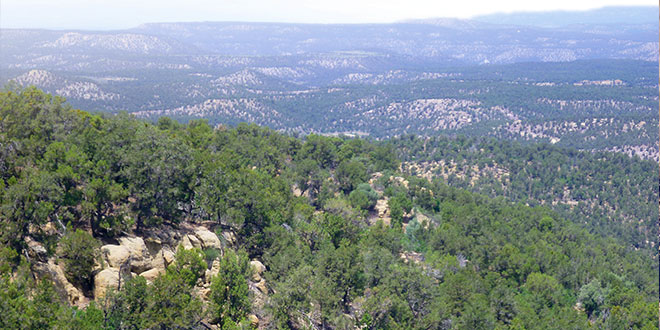 In the Jicarilla Ranger District of the Carson National Forest, there is an area known as La Fragua Canyon. The canyon lies on the western boundary of the National Forest and adjoining Bureau of Land Management (BLM) and private lands. Access for hunters into this rugged part of the National Forest has been limited for the past decade due to changes in land ownership and lack of road connectivity into the area.

In early 2016, a conversation began between United States Forest Service (USFS) personnel and the New Mexico Game and Fish’s Open Gate program to see if there might be a way to open this area back up to the public. At stake, approximately 12 miles of road and roughly 11,000 acres of public land that could not be accessed at the time. The two big questions were, how to gain the access and what would it cost?

The access piece of the puzzle had to be answered first to see if the project was even possible. Access from the west was most likely out since the road system crossed numerous private lands and that many agreements were just not practical. That meant finding an access route from the east which was possible down an existing pipeline right-of-way. This would mean improving the right-of-way into a useable road but that would be a somewhat expensive proposition.

Above: The view from a high point on the Jicarilla Ranger District of the Carson National Forest. Department photo by Rex Martensen.

In wildlife management, one lesson that has been true time and again is that more can be accomplished if there are partnerships working towards the same goals. The Forest Service and Game and Fish were already sold on this plan; however, there was a need for non-federal dollars to get the project started. This is where The Rocky Mountain Elk Foundation (RMEF) entered the picture. The RMEF has a history of working for hunting access and this project was fortunately one they could put their efforts behind.

The Forest Service completed all necessary ecological clearances in early 2017; in spring 2018, construction began on the La Fragua Re-route project. The project entailed construction of a half mile road segment connecting two existing Forest Service roads that would open this area for public use and hunting opportunities. By the end of May 2018, construction was complete and the La Fragua Canyon area was once more accessible. By having the RMEF funds act as a non-federal match, Game and Fish was able to use Pittman-Robertson (Federal Aid in Wildlife Restoration Act) monies to complete the project bringing in the Wildlife Sport Fish Restoration Program as the final partner.

Gary Calkins is the Open Gate Program Coordinator for the New Mexico Department of Game and Fish.