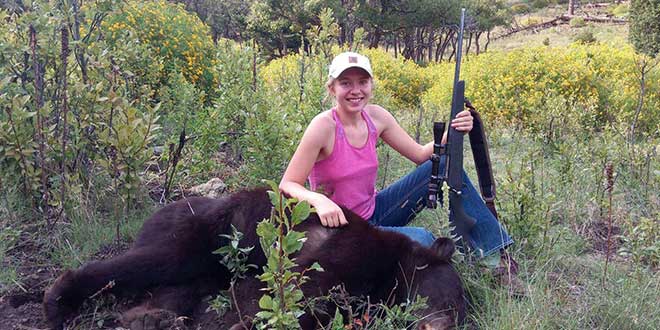 No Guide, No Dogs, No Camo… No Problem First-Time Bear Hunter Finds Success

If you asked some veteran bear hunters or those who may be researching how to hunt bears for the first time, they both may tell you that a requirement would be a knowledgeable guide and the assistance of dogs. They may also tell you that good camouflage is worthwhile if you are going to stalk a bear.

Above: Jaden Wooddell with the bear she harvested in 2020.

Well, if you ask 17-year-old Jaden Wooddell, she would tell you differently and her success in harvesting a bear this year without the use of a guide, dogs or any kind of camouflage would back up her statement. In fact, according to Wooddell, she has friends who raise hunting dogs; they thought she was crazy for not using dogs on a bear hunt.

Wooddell from Capitan, NM, started big game hunting with her mom about three years ago and successfully harvested a deer, but going for a bear would be a new challenge for her. As an avid bird hunter from a young age, she told me she enjoys dove hunting most because she gets to work with her bird dog.

For this bear hunt, her mom would again be her companion and mentor as she worked to locate and hopefully harvest a bear. Without using a guide or dogs, their strategy would be spot and stalk, a method that incorporates sitting for long periods of time looking through binoculars or a spotting scope until you hopefully see an animal you can stalk up on to get a shot. With the demands of Wooddell’s and her mom’s everyday work schedule, their times out hunting would take place whenever they finished their daily work, adding to the challenge for a successful harvest.

According to Conservation Officer Sergeant Ben Byrd of the New Mexico Department of Game and Fish, “there are quite a few people who hunt bears without dogs, either due to cost of hiring a guide and dogs or just for the challenge of spot and stalk. However, they generally have a much lower success rate.”

After about four days of hunting and around 4:00 p.m., Wooddell finally spotted a bear she thought she could put a stalk on. When asked about what it was like spotting and stalking a bear, she said, “It was a lot harder than I thought it would be; bears are very quiet and hard to see.” The bear Wooddell spotted was about half a mile out, and she was going to have to close the distance without the bear seeing her. To someone watching this stalk unfold, it might have seemed like a difficult task considering the bright pink shirt Wooddell had on since she didn’t have time to change before her hunt. However, Wooddell formulated a plan and made a slow stalk towards the bear. After some time and a quick check with her range finder, she had successfully closed the distance to 115 yards. At this point, it was a waiting game until the bear presented a better angle so she could get a clean shot. “It felt like it was forever but probably wasn’t that long,” according to Wooddell. Finally, the bear moved into position, and she was able to squeeze off a shot, which, according to her, caused the bear to run right towards her. “It was super scary but, I didn’t have to shoot him again; he dropped after about 10 yards.”

After the bear went down, it became another waiting game until she was sure the bear had passed, all the while she was shaking with excitement and anticipation to see the bear up-close. As she recounted the events, I could hear the emotion in her voice when she told me, “it’s a big deal, it’s a big accomplishment for me, I feel like… I was shaking and I got up to him and he was really there, it was… just, I don’t know it was really awesome for me because it was my first bear.”

After field dressing, they estimated the boar to be about 250 pounds. Sergeant Byrd later tagged Wooddell’s bear and was impressed with Wooddell’s dedication and success, without the use of dogs and relying only on spot and stalk methods, “They kept up the effort until they found a bear they were able to harvest.”

With that, Wooddell could add a bear to her list of successful harvests. When I asked her what she likes most about hunting, she said, “I like the feeling of accomplishment whenever you’ve worked that hard to try and find something, and you finally get one. I think that is the best part of it.” Wooddell continued, “I think bear (hunting) is my new favorite.”