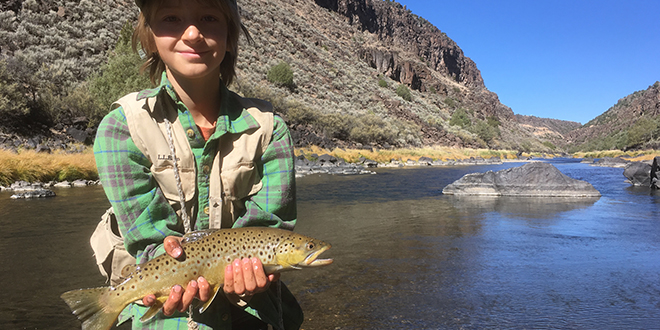 Since it was launched on January 1, 2020, the New Mexico Trout Challenge has become quite popular with both resident and non-resident anglers. To date, over 800 anglers are registered and currently taking the challenge and 98 anglers have completed it.

Banner: Picture of Marcelo and the brown trout he caught on the Rio Grande.

The challenge tasks anglers with catching five of New Mexico’s trout species, the Rio Grande cutthroat, Gila, rainbow, brook and brown. Once the challenge has been completed, anglers receive a certificate of completion and one of the highly collectable and bragworthy NM Trout Challenge coins.

For most anglers, the certificate and coin are sufficient, but for Mark Richert, it was much more than that. “It was an opportunity to think about the vast beauty of the world awaiting our exploration and hope that my boys will spend a lot of time fishing together at some point in their lives,” said Mark.

Mark’s oldest son, Leandro, a 20-year-old University of New Mexico student, took up fishing at an early age. Marcelo, his youngest son, was not that interested in fishing until they had some big catches at Eagle Nest lake last winter. “Almost overnight, he started asking non-stop questions about fish, places and tackle. All spring, summer and fall he kept asking about the next trip or running down to the river,” said Richert.

Nine-year-old Marcelo Richert, who has been fishing for six years now said “one day last spring when I was driving home with my Dad, he told me about the New Mexico Trout Challenge. I was more curious about it every day and asked him more and more questions about it. Then, suddenly, as the summer flashed by, I was reeling in anything from a 9-inch 5-ounce brook trout to a 19-inch 3-pound cutbow!” Marcelo said taking and completing the Trout Challenge was a big step toward being a better and more serious fisherman.

Marcelo said he not only likes fishing, but he really likes art. He said that he painted one of the fish he caught completing the challenge and really liked it, so he started painting more of the fish he caught using water colors for his art class. I must say, after seeing his watercolor paintings of the fish, he is a very talented young man. Honestly, I wouldn’t be the least bit surprised to see a water painting in a famous art gallery signed by Marcelo Taiman Richert. 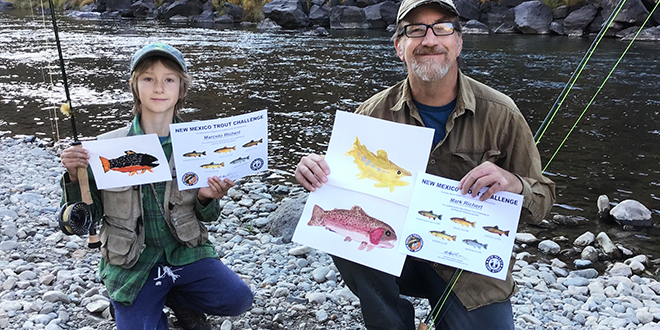 Above: Picture of Marcelo and Mark Richert holding up their Trout Challenge certificates and Marcelo’s paintings.

Marcelo went on to say “The best part of the trout challenge was going fishing more and catching more fish. Also, I got to see a lot of nature and animals. Last week I watched an otter roll around in the sand and slide into the river.”

If you would like to try your fishing skills at the NM Trout Challenge, Marcelo has come up with a set of Trout Challenge Tips that will get you catching fish like him.

#1 – Go fishing from dawn to dusk if possible. If not, then a few hours in the morning or the evening is best.

#2 – Try using lots of different lures, baits and/or flies if the fish are not biting. Some of my favorite lures and baits that I recommend using are the spinner, a nightcrawler and, most recently, a dry fly and nymph.

#3 – Exploring is lots of fun. Lately I’ve seen an otter rolling in the sand and then sliding down some grass on its belly into the river, bighorn sheep and lots of birds.

#4 – Fish in riffles, pools and behind big rocks.

“I was fortunate enough to complete the Trout Challenge, said Marcelo. “Good luck on your next cast!”