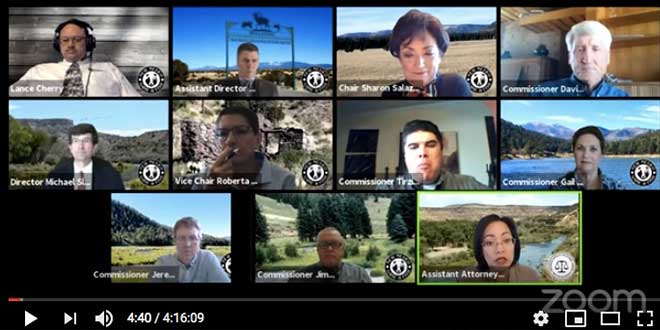 With public health orders prohibiting gatherings of more than five people, the State Game Commission and Department decided to tap into the Zoom webinar platform to conduct commission meetings and ensure public participation.

Starting this past April, commission meetings have been held via live webcast on the Zoom platform. Prior to every meeting, the Department encourages members of the public interested in participating to pre-register to attend the meeting. Webcast participants are able to listen to the meeting using a desktop computer or mobile devices such as smartphones and tablets.

State Game Commission meetings are usually held several times per year in different cities and towns around our state. Most recently, meetings have been held in Albuquerque, Las Cruces, Roswell and Farmington.

“In response to the pandemic and required travel restrictions, the State Game Commission and Department officials quickly shifted gears and found an efficient solution that keeps our commissioners, staffers and members of the public safe and in compliance with our Governor’s rules,” said Director Michael Sloane. “By conducting our meetings via webinar, we are now reaching an even wider audience while allowing constituents to provide comments on meeting topics.”

The Department expects to continue holding meetings via webinar until the Governor’s restrictions are lifted.

To learn more about how to listen to future commission meetings on Zoom, or to listen to previous meetings, visit: http://www.wildlife.state.nm.us/commission/webcast/.

This project, originally intended to benefit fish and wildlife through improving habitat, has also created increased access for boaters and anglers, improved fishing opportunities and allowed for individuals who are drawn by the thrill created by the surf wave.

A gradient control structure was put in near the base of the spillway to prevent river head-cutting, control the elevation of the water and protect downstream habitat features. The grade control structure also had the unintended benefits of creating a standing wave that can be surfed and bringing a new form of outdoor recreation to the Rio Chama area.

For fish and wildlife, this project will improve overwintering habitat for wild trout at low flows, provide holding cover for stocked trout and improve habitat at all water levels for native fish species such as Rio Grande chub.

Department wildlife biologists were dispatched to the Gila Mountains of southwestern New Mexico from June 5 until June 10 to contribute to a large research initiative in collaboration with New Mexico State University.

The multi-year project, which began fall 2018, is aimed at determining the impact of recovering Mexican grey wolf populations on elk herd productivity in the Gila Mountains. University researchers, in collaboration with the New Mexico Department of Game and Fish and Arizona Game and Fish, are investigating habitat use changes, predation risk and calf survival across a spectrum of high-to-low wolf use areas in both New Mexico and Arizona.

Last June, the Department aided university personnel in deploying an additional 191 collars across the study area, including Arizona. Nearly half of the calves were captured in New Mexico using a combination of on-the-ground and helicopter capture techniques. With funding provided by Rocky Mountain Elk Foundation grants, very high frequency (VHF) collars were replaced with Iridium Global Positioning System (GPS) collars containing better mortality detection sensors and capable of transmitting location data via satellite. These collars will better aid mortality investigations by providing more real-time data to researchers tasked with determining the cause of death.

To date, the New Mexico Department of Game and Fish and Arizona Game and Fish have captured 425 adult cow elk and 422 calves have been fitted with GPS collars which collect useful data regarding habitat use, movement patterns and survival rates.

“Learning more about cause-specific mortality amongst adult and calf elk will help biologists determine the impact the recovering wolf population has on elk within the Gila region; beneficial knowledge for the management of wolves and our understanding of the ecology between predator, prey and maintaining sustainable populations of both,” said Travis Zaffarano, elk program manager with the Department. 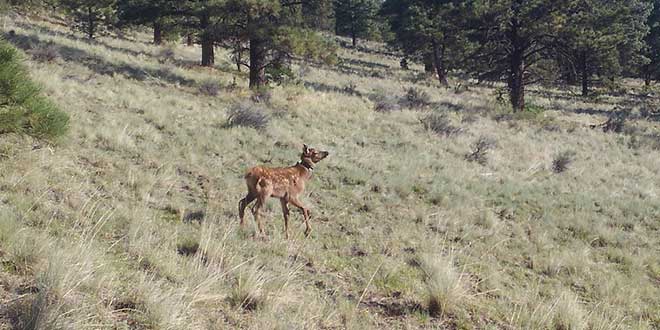 A young elk calf looks to re-join its mother soon after being fitted with a GPS collar. Elk calves within the Greater Gila herd are being monitored to assess survival rates and to determine specific causes of mortality, like predation rates for different predators. Travis Zaffarano, New Mexico Department of Game and Fish.

Every year, the Department of Game and Fish offers oryx hunts for injured veterans on White Sands Missile Range. Injured military service members are invited to apply online for the special drawing to award up to 10 special oryx authorizations for hunts on the missile range. In 2021, applications for this special hunt will be available starting June.

Applicants must be veterans of the U.S. military with a disability rating of 50 percent or greater in accordance with U.S. Veteran’s Administration guidelines for receiving disabled veteran benefits. Significantly injured, active-duty military members who do not have a VA disability rating also may apply.

The drawing is open to resident and non-resident eligible applicants who do not hold a current-year oryx license.

The hunts are typically held between Sept. 1 and March 31 every hunting season, with dates and areas to be determined by the successful applicants in coordination with White Sands Missile Range. These hunts will not be considered once-in-a-lifetime.

What do you want to be when you grow up?

If you ask us, some of the coolest jobs in the world are focused on wildlife conservation. From wildlife biologists to conservation officers, educators to information technology specialists, writers to financial specialists, it takes a wide variety of talented and specialized individuals to carry out the Department’s mission to conserve New Mexico’s wildlife for future generations. 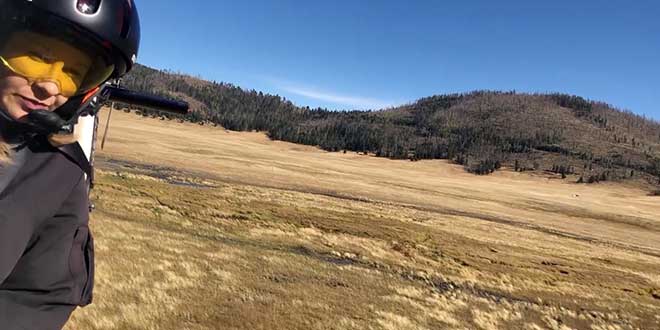 During the fall of 2019, the Department partnered with Into the Outdoors for a three-part video series highlighting Careers in Conservation. Into the Outdoors is an education network that aims to “empower today’s youth and adults to think critically about our planet.” It also offers video resources for educators alongside lesson plans in various science categories, according to the website.

Check out the video series to ride in a helicopter with Dr. Nicole Tatman, big game program manager, as they fly elk surveys across the Valles Caldera and Northern New Mexico. Then join conservation officers Tyson Sanders and Ariel Perraglio as they talk about skills needed to be on the front line of wildlife management. Finally, wrap up with a review of the history and future of wildlife populations so you can either become a conservation professional or play a role in wildlife conservation.

Into the Outdoors has taken this one step further, creating lesson plans for all ages of students. Check it out at https://intotheoutdoors.org/topics/careers-in-conservation/. 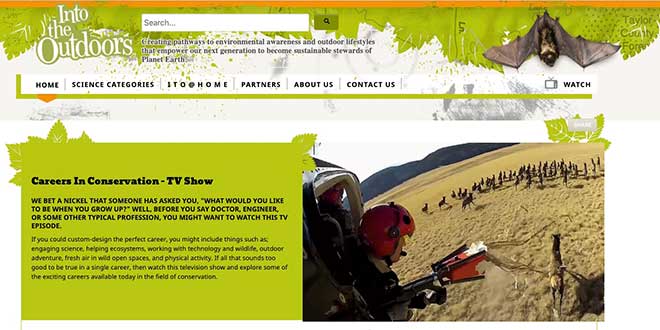