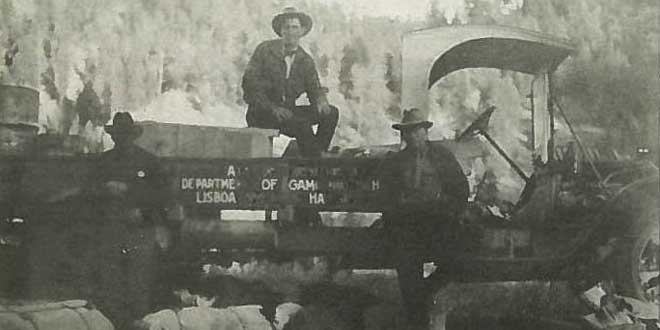 The most popular Department of Game and Fish installations with the public are without a doubt the five trout hatcheries maintained by the Department. Every year thousands of visitors stop at the hatcheries look at the big fish in the show pond, feed the fish , and wish they had a net to catch some of the “big ones.”

Above: An early Hatchery Truck. Transporting fish was a difficult job at best in the twenties. Today (in 1962) one truck can move more fish in one day than could be moved in a month with this truck.

The hatcheries, Lisboa Springs, Parkview, Red River, Seven Springs, and Glenwood, are pretty much taken for granted. The only complaint, universal to all fishermen, is that there never seems to be enough trout. Perhaps if these fishermen knew of the struggle to get the se hat cheries, and of the tremendous advancement in the production of trout in the past years, their complaints might turn to admiration for a job well done.

The need for trout was recommended by the Territorial Game Warden even before New Mexico became a state in 1912. Trinidad C de Baca, the first state game warden, expressed the need to provide a fishing license fee in order that money might be made available to develop a trout hatchery at Lisbosa Springs. A fishing license for residents was established by the 1915 Legislature except for those fishing for trout.

State Game and Fish Warden, Thomas P. Gable , in his 1921-1922 annual report to Governor Merrit C. Mechem had this to say regarding a trout hatchery:

“At each Legislative session since 1909, when I first held the position of Game Warden, I have made an effort to secure legislation covering the establishment of a fish hatchery … This question was finally taken up in the 1921 Legislative session and an Act was passed providing for the establishment of a New Mexico Fish Hatchery . This Act set aside $30,000 .00 of the gasoline tax for the construction of the hatchery. The Game Commission visited a number of different sites in an endeavor to find the most suitable location for the fish hatchery. The final determination was the purchase of the Lisboa Springs, about eight miles from Glorieta, formerly a part of the Valley Ranch, on Pecos river.” 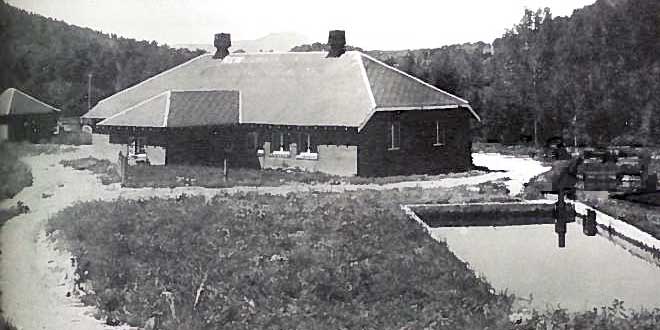 Above: Lisbosa Springs Hatchery, the state’s first, as it appeared in 1921 when it was built. At the time, it was considered a model hatchery.

John P. Bengard was given the job as superintendent of this hatchery. He had had 12 years of experience in fish culture in Colorado. He remained in this capacity at the hatchery until his death at the age of 76 in 1944. His knowledge of trout culture has been the basis for many of our trout culture techniques in New Mexico.

The Lisboa Springs hatchery when first established was known as New Mexico State Hatchery No. 1.

Lisboa Springs trout production has not increased much in numbers; however, the larger sizes or pounds, that are planted today, probably never were dreamed of as being produced at this unit. In the 1960-1961 fiscal year Lisboa Springs planted 1,119,729 rainbow, brown and cutthroat trout weighing 57,372 pounds; 182,097 of these fish were nine inches long when planted with a total average in length of five inches. If the 1,922,000 planted in the first year of operation averaged 1 1/2 inches they would have weighed only 2,500 pounds.

The modern-day methods in. counting fish are far more accurate than in the early days. This fact is indicated in records up until about 1940. Before this time records show that in plantings of 1,000 or more fish, the three last three digits were always zeros. If fish are sampled and weighed as they are today, this would not happen unless a considerable amount of figuring was done.

The next two hatcheries were the Gila and Carrizozo Hatcheries built in 1923 and 1924 respectively. Thomas Gable had recommended a hatchery in Taos County previously; however, it did not come about until 1928.

The Gila Hatchery or Jenk’s Cabin Hatchery, as it was later known, was built in the fall of 1923 at the junction of White Creek and the West Fork of the Gila, some 30 miles by trail from Willow Creek. The reason for building a hatchery here was to obtain access to the streams. The transporting of fish the 300 miles from Pecos to the streams in the Gila Wilderness over dirt roads of the 1920’s, and then packed twenty or more miles further was an impossible job.

The water supply here was limited, and only fry could be raised and distributed to the streams by pack animals. Later on when more modern means of transporting fish long distances over better roads was possible, became desirable to develop a hatchery which was more accessible. The Glenwood hatchery was established in 1937.

Water quality and quantity for hatchery purposes bs been a problem in this area. Glenwood satisfactorily produced fish until the extreme drought conditions in the fall of 1948 in the southwestern part of the state caused the springs to diminish to a point where the trout on hand had to be planted out. Since that time this hatchery has operated only when water was available, and has served more as a re-distribution point. Whether water conditions will ever return to make this a satisfactory hatchery is not known.

As long as the state has facilities like Red River it can produce trout and transport them to this area for less cost than to raise them here. Modern-day techniques in transportation of trout have eliminated many of the problems of the early-day hatcheries. During the last fiscal year Glenwood produced 6,950 pounds of trout during periods when water flows were satisfactory and 12,750 pounds of trout were re-distributed. Part of the trout stockings in this area are made directly into the waters from other hatcheries.

The Carrizozo or Eagle Creek Hatchery, like the Jenk’s Cabin Hatchery, was established because of the great distance from Pecos to supply fish. Another reason was a request from the people in that area who wanted a hatchery even though spring water had to be supplemented with creek water, thus making it impossible to get any growth in wintertime. It was for this reason, together with the high cost of producing fish, that this hatchery was closed in October 1931. This hatchery planted 124,890 1 ½ to 5-inch fish in its last year of operation.

The Chama Hatchery was the next unit, built in 1927-1928. Of all those built in New Mexico this hatchery seems to have been the only one where political pressure was brought to bear causing the hatchery to be built without regard as to whether or not it was a feasible undertaking. It was turned down as a feasible site several times by the department; however, when a prominent citizen of the area donated the land and one thousand dollars in money to begin construction, the Commission yielded and ordered the department to build the hatchery. The spring had a flow of 50 gallons a minute, this being the requirement for five standard troughs and hardly enough for a whole unit.

There was a stipulation in the deed to the property that if the site was not used for hatchery purposes over a period of three years, the site as well as all the improvements would revert to the original owner. This is what happened when it was abandoned in 1931, when the Parkview Hatchery was started. This statement is quoted from a report to the commission by the State Game Warden, and dated September 18 , 1931: “Why a hatchery, even as a gift, should have been established at Chama with this site at Parkview available with twenty-five times the volume of water is beyond my comprehension.”

It was soon after this that the Parkview hatchery site was purchased and the hatchery built. The WPA played an important part in the development of Park­view, Seven Springs, Glenwood and Red River hatcheries. The original Parkviev•, rearing ponds were mostly of earthen raceways; however, the hatchery produced up to 4-0,000 pounds of trout and an average of two million eyed eggs up to the 1956-1957 fiscal year, when it became necessary to rebuild the rearing pond system into a more modern type of operation.

The Seven Springs Hatchery was also established about this time in the Jemez Mountains. This site, selected in 1932, was on U.S. Forest administrative land known as Seven Springs Ranger Station. Construction was started in 1933 with WPA labor who used teams and scrapers to scoop out the two large brood lakes and earthen ponds. These ponds are on the same site where ponds were built in the early 1900’s to raise trout.

This hatchery was established primarily to serve this area, which it now does serve. The springs, although of not a great volume, (500 gallons per minute) are 52-degree water. The important function of this hatchery is to maintain a brood stock l)f the New Mexico cutthroats which produce about one-half million eyed eggs every year. These eggs are not available to us from any other source. Today’s needs for trout in this area exceed the capacity of the hatchery’s annual production about 22,000 pounds, making it necessary to stock trout from other hatcheries.

The Taos Hatchery was built in 1928, another in a system locating a unit in an area where trout were needed. Just why it was located in the city limits of Taos is not known. The volume and quality of water were by no means ideal. This was the story of the Taos hatchery. The water quality reached a point of being polluted, causing a 101 oxygen content which resulted in large losses in trout fry. For this reason a search was made for a more suitable water supply which led to the discovery of the Red River Springs in 1940.

The Red River hatchery site was selected after considerable investigation as to whether trout could be reared in 63-degree water, which at this time had not been done except in California. Here there were springs of about 15 second feet flow or 6,750 gallons per minute. It was the largest flow ever used for fish culture in New Mexico, but 63-degree water would likely cause premature hatching. This problem could, however, be solved by piping in another spring of 54-degree water two miles distant.

The construction on this hatchery began in 1941 with WPA labor constructing some of the buildings and the first round ponds. Work continued slowly, particularly during the war years, adding new raceways aJKI buildings until today Red River is one of the largest hatcheries in the Southwest. Besides having a hatchery facility capable of hatching a million fish at one timt there are 89 round ponds 25 feet in diameter and 26 earthen raceways capable of holding up to 3,000 pounds of trout each.

This hatchery in itself produces more trout than the total of the other four. Each year there is an increase in fishing pressure as well as new waters to be stocked, therefore expansion of the hatchery facilities must come.

The increase in trout production will probably not be as spectacular in the next forty years; however, production will be greatly increased. In 1921 about 2,500 pounds of trout were planted by the first hatchery. Last year the five operating hatcheries stocked 355,637 pounds (5,703,913 trout) of which about one and one-fourth million were nine inches long when planted.