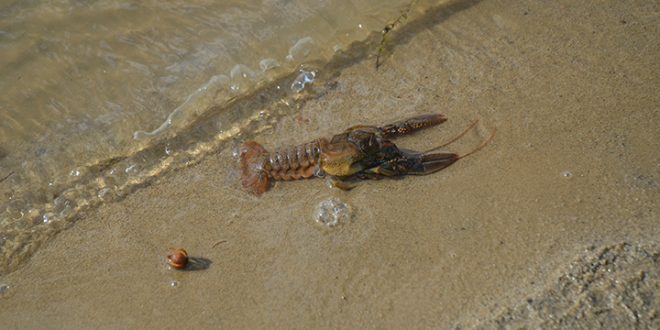 Mudbugs, better known as crawfish, are a lot of work but also a lot of fun to catch — and good to eat

I have always loved being outdoors, whether it’s hunting, fishing or just hiking around the mountains sightseeing and learning new things. While attending college at New Mexico State University, I spent a lot of time on the Rio Grande river fishing and setting trot lines, and occasionally on the irrigation ditches gigging frogs or looking for new fishing opportunities.

One day while exploring some drainage ditches around some farms near Hatch, I saw a piece of orange baling twine coming out of the water that was tied to a stake in the ground. Curiosity got to me, so I pulled on the rope and when I reached the end, I was baffled to find it tied to the base of a Russian thistle, better known as a tumbleweed. When I pulled the tumbleweed out of the water, a bunch of crawfish fell to the ground and scurried back to the water. It was at that moment I realized this was someone’s crawfish trap. I took a few notes in my head, lowered it back into the water and headed off to find myself a tumbleweed.

From that moment on, I found that much of New Mexico’s waters, including the lakes, had crawfish in them. I also learned that the crawfish caught in the clear mountain lakes tasted a little better than the ones in the irrigation ditches. I assumed the reason the ones in the lakes tasted better was due to the clean clear water, as opposed to the muddy and murky water in the irrigation ditches. Either way, they were good to eat and it was a great excuse to get outdoors.

The crawdad fishing technique that worked well for me included tying a few pieces of bacon in the center of the tumbleweed. Not any tumbleweed, but a really big green tumbleweed, as dead brown tumbleweeds didn’t seem to hold up as well. I would then anchor the tumbleweed to a stake in the ground and leave the tumbleweed in the ditch for 24-48 hours. When I pulled the tumbleweed, I would shake it over an ice chest where I would keep the larger crawfish and throw the smaller ones back. Occasionally, I would keep a few small ones which I used for bait. I found out that largemouth bass like them more than I do.

If you were wondering about rules and regulations on crawfish in New Mexico, there are none, other than importing them across the state line. So, you can take or capture them in any way that doesn’t harm any protected species.

If you have eaten crawfish, you know there isn’t a lot of meat on them, so you really need to catch quite a few to make a meal. I found that a meal for me consisted of approximately 4 pounds of crawfish. The 4-pound weight includes the whole crawfish. There is no real secret when it comes to cooking crawfish, unless you are going to do a crawfish boil. If this is what you prefer, you can find many recipes online. For me, it was boiling them up in a pan on the stove until they turned a beautiful red color, about 10-15 minutes, separating the shell from the meat, sprinkling some of my favorite seasoning on them and down the hatch they go. I would enjoy them with some garlic-roasted baby potatoes and grilled corn on the cob.