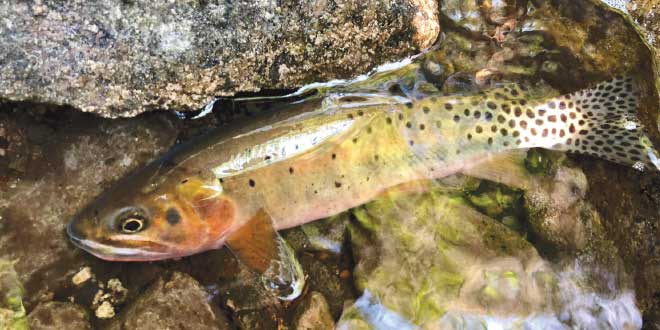 In an interview with New Mexico Wildlife, Tucker Brauer, Rio Grande cutthroat biologist with the Department of Game and Fish, talked about the reintroduction of this important species to our state. Brauer, who is originally from Idaho, received an associate’s degree in aquaculture from College of Southern Idaho and bachelor’s and master’s degrees in fish science from the University of Idaho.

Prior to his current position, he worked extensively with the Idaho Department of Fish and Game and the Idaho Cooperative Fish and Wildlife Research Unit where he focused on fisheries research and management.

?Where can anglers currently fish for Rio Grande cutthroat trout (RGCT)?
The majority of opportunity lies in the northern part of the state throughout the Rio Grande basin and Pecos River basin. Popular areas for fishing include the Rio Costilla and upper Pecos River. Many RGCT populations in New Mexico are managed as “Special Trout Waters.” Certain RGCT conservation populations are catch-and-release only and the remaining populations are protected by a bag limit of two fish per day. ?Where else do you plan to reintroduce Rio Grande cutthroat trout in our state?
There are a lot of streams currently being considered for RGCT reintroduction. We are currently planning reintroductions into Capulin Creek and Peralta Creek, both of which were affected by the Las Conchas wildfire. In addition to post fire repatriation, we are planning to begin a RGCT restoration project on Rio Costilla in Fall 2020. This project will restore RGCT to an additional 25 miles of their historical distribution. ?How does wildfire impact RGCT?
Wildfire itself generally doesn’t kill fish. Instead, monsoon rainfalls following wildfire often wash away unstable soils that often occur after wildfires and can cause high debris flow into streams. These debris flows can effectively “choke-out” the stream and make conditions uninhabitable for fish.

Wildfire has the potential to significantly impact the conservation status of RGCT in our state. Wildfire risk assessments completed in 2013 found that 86 percent of RGCT populations exist in high wildfire risk areas. The Department is continually working to duplicate at-risk RGCT populations on the landscape through fish transfers and wild-spawning efforts. By duplicating important RGCT populations, the risk of wildfires wiping out entire genetic strains of RGCT is reduced.

?Can you describe the impact of the Las Conchas fire in 2011 on RGCT?
The wildfire devastated some populations of RGCT in that area. However, there was a benefit in that the fire cleared many streams of nonnative fish populations. This has provided multiple opportunities to reintroduce native RGCT throughout the affected area. ?Should anglers be aware of any restrictions on streams the Department is repatriating with RGCT?
All these wildfire repatriation streams will be managed under our statewide cutthroat regulations. That means only two Rio Grande Cutthroat can be harvested per day with no tackle restrictions. If we designate a recovery stream as a Special Trout Water, then there will be additional tackle and harvest restrictions specific to that stream. For more information, visit:
http://www.wildlife.state.nm.us/fishing/game-fish/
Banner: Rio Grande cutthroat trout. Photo by Craig Springer, U.S. Fish and Wildlife Service.
Share

Tucker Brauer is the Rio Grande cutthroat biologist with the Department of Game and Fish.