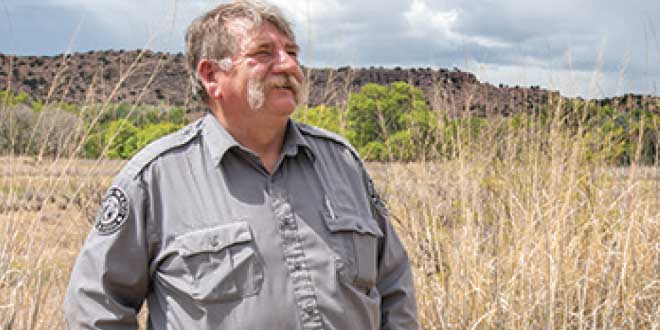 Cool Jobs at Game and Fish, Where do wildlife go during the winter months? and What animals do you see in the photos below? 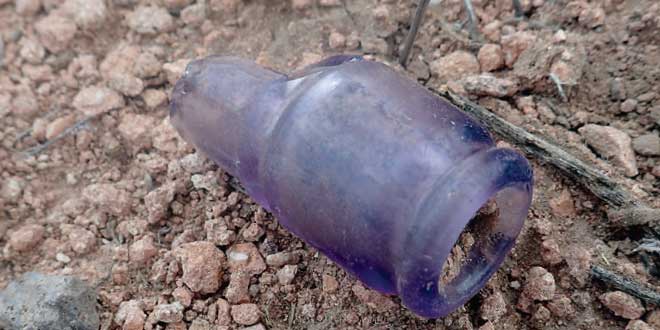 Banner: Jack Young is the Department’s archeologist and tribal liaison. Department photo by Martin Perea. Below: Sunlight turns the glass purple. This glass was made in Germany in the 1870s and imported to the United States during World War I.

“We spend more time in the library than we do outside sometimes,” he said about his job.

He also likes to remind people that archeologists don’t look for dinosaurs. “We don’t dig up dinosaurs,” he said. “Only paleontologists do.”

?What is your typical day like?
Sometimes I work at a computer. I work on reports and maps and looking at the next job we’re going to go to. When we’re out in the field, we’re walking all day long looking for cool stuff such as arrowheads, pottery shards, metates, old barbwire and purple glass. ?Have you always wanted to become an archeologist?
Not really. I originally wanted to be a cowboy or veterinarian. And then I went and got a history degree in European early modern history. My minor was in anthropology. When I graduated from the University of New Mexico with my first degree, I went to University at Durham in England for archeology. ?What do you need to do to become an archeologist?
You have to go to lots of school and walk a lot outside finding stuff to learn what’s out there. You have to have a bachelor’s degree at least for a technician job. A master’s is preferred. You have to really like history or the past. You should major in history or anthropology. ?What do you like most about your job?
I feel like I’m preserving something for future generations and I really like understanding the past. The best thing I like is teaching younger archeologists the practical, in the field experience. ?Why does the Department of Game and Fish have an archeologist?
In order for us to get money from the government for our projects at the Department we have to have to make sure we are not disturbing important cultural sites. ?What advice do you have for someone who wants to become an archeologist?
Read a lot about the past, watch how people make things and use tools. 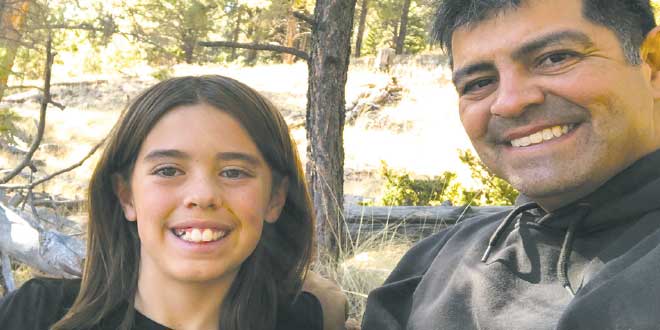 Above: Right: James Dominguez with his son Aidric. James is the Aquatic Invasive Species (AIS) coordinator with the Department of Game and Fish. Photo by James Dominguez.

I will admit that when my son asked to take the hunter education course so he could apply for a big-game tag, I was nervous.

How am I going to teach my son how to hunt?

I wondered. I had never gone big-game hunting.

For many years, I had mentioned applying for a tag, but had never drawn anything. As it turned out, so many of our friends are avid hunters and were so willing to provide advice and loan gear. I learned so much about hunting but equally I learned so much about my son. I watched him practice safe firearm techniques and make ethical hunting decisions, not once letting the thrill of the hunt overtake what was the right thing to do. I watched him carry his gear and rifle up mountain slopes, not once complaining that it was too steep or too cold. I watched him climb into his sleeping bag each night dead tired but eager to get started again the next morning. I watched my son grow up in a way I had never seen.

As parents, I feel that we think that we always need to be the teachers and our children are the students. In many instances, that is certainly the case. As it turns out though, I didn’t need to worry about teaching my son to hunt, he had the heart to learn from others and experiences presented. In fact, I would admit that I was the student and my 10-year-old son was the teacher – pushing me to get out of my comfort zone and try something new.

Read about the hunt from James’ son’s view in Aidric’s article “My First Hunt” at https://magazine.wildlife.state.nm.us/my-first-hunt/.

Where do wildlife go during the winter months? 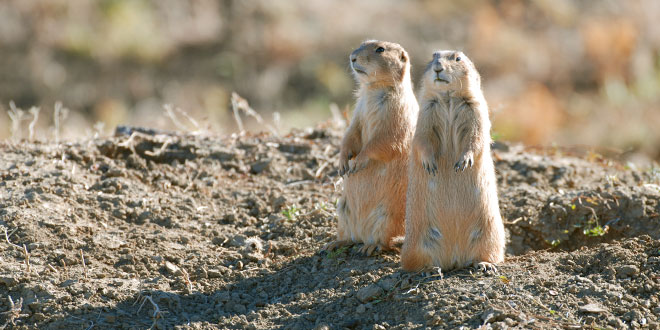 If you stepped outside on a particularly cold day this past winter, you may have been greeted with shivers, numb fingers and toes and an overwhelming urge to run back inside, crank the thermostat up and hunker down with your favorite wildlife magazine.

Wild animals, of course, don’t have those kinds of options. Instead, they have many different strategies for surviving leaner months.

Everyone knows bear hibernate during winter. If the black bear, one of the largest mammals in the state, hibernates (or enters long states of inactivity similar to sleep), any furry critter smaller than a bear must do that too, right?

Not necessarily. Many are active year-round, even when the ground is covered with a few inches—or a few feet— of snow.

Black-tailed prairie dogs are a member of the rodent family, but unlike some of their smaller mouse and rat kin that hibernate, you can find them standing guard in their “towns,” clusters of underground colonies, even during winter. When it is especially cold, they may sleep for several days in a row, when an extra layer of body fat they have put on during the year provides them with nutrients to survive.

American pika—the smallest member of the rabbit order—are another mammal who are right at home in cold weather, thanks to their Siberian ancestors. Although they do not hibernate, pika can still be hard to observe during winter, spending most of the time in their dens. There, they have stored grasses to eat during leaner months. They can still be spotted outside eating on warmer days. Pika are plenty tough, spending their entire lives above the tree line.

You might know that many bird species fly south for the winter and back north for warmer months, but you might be surprised by just how far some of those migrations are.

Swainson’s hawk, for instance, may travel further in migration than any other raptor species in North America. Though they breed on prairies across the western United States, Mexico and Canada, they travel to South America for winter in the areas of Brazil, Argentina, Chile and some neighboring countries. During this trip, some Swainson’s hawk will cover over 7,000 miles.

Other birds do not migrate for winter and are right at home in our snowy mountains. American kestrels – another raptor – brave the winter months, as well as many common winter birdfeeder visitors like Steller’s jay, white-crowned sparrows and dark-eyed juncos.

How do fragile butterflies survive harsh winters? We know they head south to warmer climates in the fall, like many of our birds, but where they go exactly is still a mystery for some less-studied species. One of our best-known species is the monarch butterfly, and we know monarchs west of the Rocky Mountains head further west to the sunny coast of California. Ask someone scraping a car windshield free of ice on a frigid day and they might agree a vacation to the California coasts sounds pretty enticing.

There are fewer leaves on the trees and a lot of animal activity slows down, but this doesn’t always mean that New Mexico wildlife can’t be observed during winter. For those of us not headed to sunnier climates, bundle up, grab your binoculars and see how many animals you can spot next winter season.

What animals do you see in the photos below?

Is it a pronghorn? Or a bighorn? It isn’t always very easy to know for sure what animals ancient people were drawing. Can you identify the petroglyphs in the photos below? Tell us what you think. Go to the Department’s Facebook page on Friday, August 7 and share your ideas. 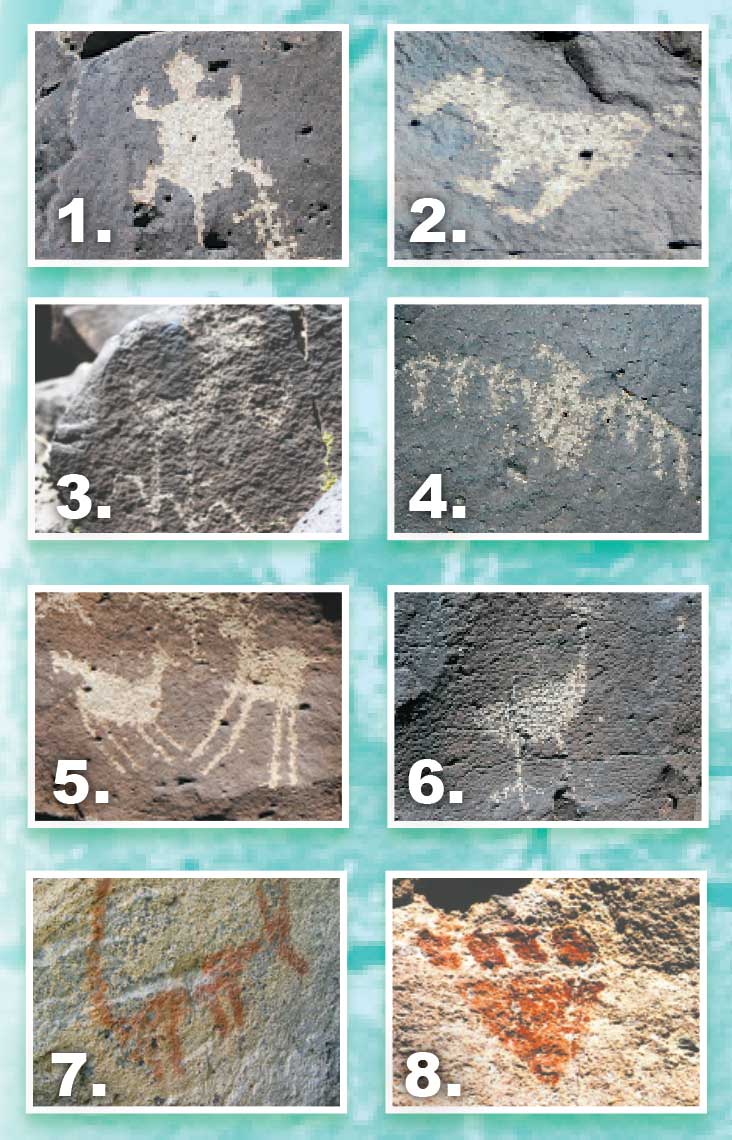