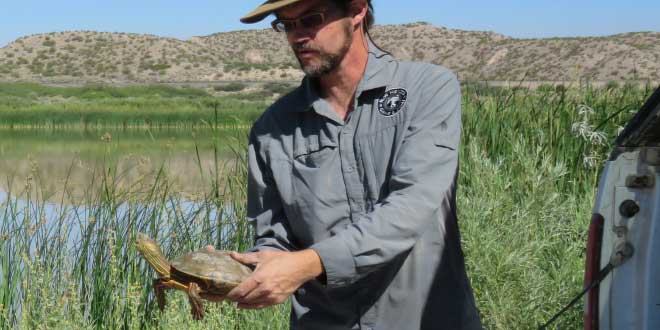 ?Why do you like reptiles and amphibians so much?

Amphibians and reptiles came onto my radar in my graduate school days. I had always been interested in wildlife and caught my fair share of garter snakes as a kid in New Mexico, but my initial interest was in research and sharks, the latter courtesy of the movie, “Jaws.” Not having any sharks here in the state, I took a course in herpetology and the professor and I ended up working together for many years. I’ve always had a passion for helping poorly-represented species like snakes and toads, not to mention little mice and bats, so the position of herpetologist was attractive to me.

?What does a typical month as state herpetologist look like?
Much of my job entails working with the U.S. Fish and Wildlife Service to recover species currently listed for protection under the Endangered Species Act, or working to make protection unnecessary for species proposed to be listed. The majority of field work surveying for reptile and amphibian species is contracted out to species-specific experts, although I do like to help when possible. As you might imagine, there are a lot of meetings, study designing and contract management. I also answer lots of questions and advise students interested in reptile and amphibian research. ?Do you think reptiles and amphibians are misunderstood?
Yes, though it is getting better. Many species aren’t as readily observed as birds or mammals, which can lead to misinformation and fear. Living in New Mexico means living with venomous reptiles, particularly rattlesnakes. Citizens should educate themselves about living with venomous animals and should maintain a healthy respect for all wildlife. Amphibians and reptiles are integral parts of an ecosystem. ?I saw a pink snake on the road. What kind of snake was that?
Every year, I receive multiple reports from callers that they saw a “great big, bright pink snake.” One of the most commonly seen snakes throughout the state is the non-venomous coachwhip, with one possible color morph being bright pink, particularly around Albuquerque and Santa Fe. Though beautiful, they are neither rare nor noteworthy. 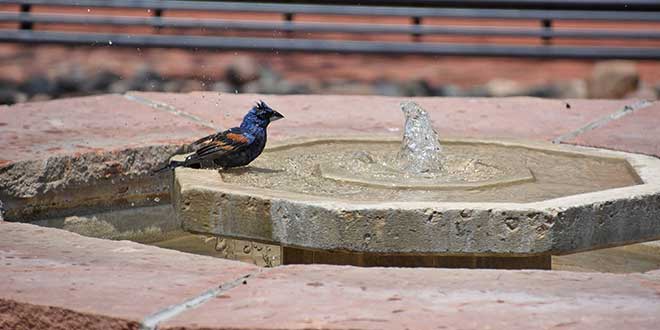 When you are thirsty, you head to your kitchen, a store or maybe a public water fountain for your hydration. If you’re away from civilization, you carry your water with you. But what do animals across the state do when they need water?

There are two types of water intake for animals. The first of these is free-standing water. Many species will head to a known location of water for a drink multiple times throughout the day. This could be a lake, river, stream, spring, puddle or even smaller, less obvious sources. It is impressive how neighborhood birds learn where leaky pipes or yard irrigation drip systems pool and visit them daily. Some animals will even lick dew from wet vegetation in the mornings.

How much water they require can depend on their body size. It is estimated a mule deer needs half a gallon of water daily per 100 pounds of body weight, so an average-sized deer needs approximately 1.5 gallons per day.

All of our animal species need water to live, but in the arid southwest, water can be scarce. Much of southern New Mexico is the Chihuahuan Desert that only receives slightly over nine inches of precipitation per year, on average. So how do desert denizens get their water?

They rely on dietary or metabolic water, the second type of water intake in animals. Metabolic water means the water isn’t from a free-standing source but instead derived from the things they eat. For example, kangaroo rats eat primarily seeds and get all the water they may ever need from them as they are broken down in the digestive process. They might not take a sip of water in their entire lives. 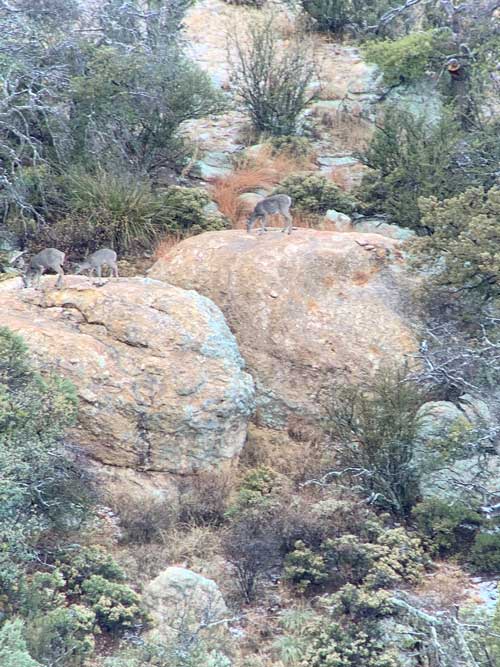 Texas horned lizards won’t pass up a puddle for a drink if the uncommon opportunity presents itself, but finding free-standing water might be near impossible for them at certain times of the year. Instead, this ant-eating lizard collects water from dew or rain through a process called “rain harvesting.” Micro-channels between the horned lizard’s scales collect and channel water toward the corners of its mouth through capillary action. The horned lizard need only sense rain and position itself to be struck by the droplets or walk through dew-laden plants to get all the moisture it needs.

So, the next time you’re feeling parched, think about how easy of a problem it is for you to remedy versus the struggle wildlife goes through to survive. It is important to provide and conserve wildlife water sources for this very reason.