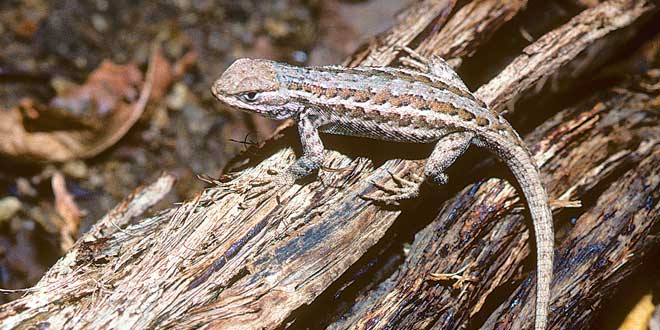 Herpetology is the branch of zoology concerned with reptiles and amphibians, and the search for these interesting creatures can be an entertaining, fun-filled activity enjoyed by an entire family.

For those interested in giving herping a try, New Mexico is a great place to start.

Above: Found in a good portion of the western states, the common sagebrush lizard will feed on a variety of insects and spiders. These lizards are easily frightened and will quickly flee. NMDGF photo by Charlie Painter.

Herping often can be completely free. If collecting for commercial purposes, a permit is required and a fee might apply to access certain areas; otherwise the hobby is a fun and economical.

Know Before You Go

The world of herping can open a whole new, fascinating and stunning world.

While feathered and furry creatures have their charms, consider the bright greens and yellows of a collared lizard sunning itself on a fence post, or the western hognose snake, which will feign death like a possum.

If fear is the roadblock to such adventures, approach creatures with caution and don’t touch what you don’t know. In New Mexico, the primary threat to human health will have a rattle at the end of its tail. Even newborn rattlesnakes will sport nonfunctioning buttons.

Venomous Gila monsters are not often encountered and only occur in the southwestern portion of the state. These large, orange-and-black lizards are easily identified by what appear to be beads on the skin. Although rarely encountered, the “red-on-yellow” venomous coral snake should not be handled.

For those interested in getting pictures, these venomous creatures always should be photographed with both eyes open to be sure of its location and movement. 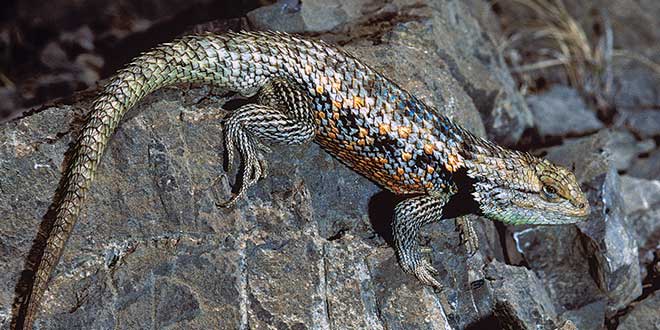 Above: The twin-spotted spiny lizard can be found primarily in the southeastern portion of New Mexico. For those interested in finding one of these lizards, don’t just look, but listen; they often can be heard scratching at tree bark. NMDGF photo by Charlie Painter.

A pair of hiking boots – open-toed shoes provide little protection – water, hat and sunscreen is all you need to begin, although a camera, GPS and a pair of leather gloves are good additions.

Seasoned herpers might bring along a few extra tools, such as a field hook for lifting things to check under while keeping fingers at a safe distance. Old golf clubs or walking sticks can do the trick, too. Snake tongs are grabbers for keeping venomous species at arm’s length, but should be left to professionals because of dangers associated with incorrect use.

Viewing is one thing, but catching a lizard can be an adventure in itself. An approaching hand will send most lizards running for the hills, but an inanimate object like a branch or fishing pole is largely ignored.

By placing a slip noose of dental floss or string at the end of a pole, a lizard can be caught by gently coaxing it over the lizard’s neck and slowly applying tension to close the loop. It helps to have a friend standing by to help capture the quarry.

Note of caution: Avoid using fishing line or wire for lizard noosing. Those materials could cause lacerations to the animal. Also avoid the lizard’s tail when capturing. Many lizard species can drop their tail in response to a perceived threat. The lizard can regrow the tail, but it takes extra caloric intake to do so, meaning a greater burden on the lizard.

Where to Look and How

Herps are ectothermic, relying on their environment to regulate their body temperature. So the best time of the year for herping is spring through summer, with an activity peak during the monsoon season.

There’s no need to travel vast distances. For many, an interest in the subject begins at home in the yard. It might start with a bug-eyed, translucent-skinned, wall climbing non-native Mediterranean gecko. Spiny and/or tree lizards, box turtles passing through and spadefoot toads after rains are all easily viewed in an urban environment.

When ready to expand the adventure, just visit a favorite hiking spot and pay attention to the trail. Listening can help as lizards dart under and over dry plant matter, making rustling sounds.

Herps seek thermal refuges under things in their environment, so log rolling and rock flipping are great for finding them. But be sure to keep your hands away from the edges of potential hiding places. The possibility exists for something venomous, including spiders and scorpions, to be underneath. It’s safest to use one of the tools to do the initial lifting and remember to leave everything the way you found it.

For those that aren’t much for hiking, “road cruising” is another effective method for finding herps. Concrete, asphalt and even gravel roads build up and store heat during the day. On great herping nights, those roads remain warm after sunset and act as an attractant.

For safety, low-traffic, rural roads are best. Drive slowly and look for irregularities in the road, such as a rock or stick, which might actually be a toad or snake. Train your eyes to distinguish between the objects. When stopping, move your vehicle safely off the road and out of the way of any oncoming traffic.

Develop a fascination for all the wildlife around and there will never be a shortage of opportunities to enjoy the outdoors.