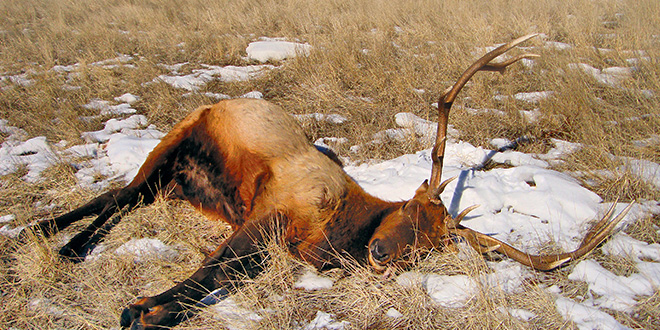 Those spending time outdoors can help catch poachers. Whether spending time in the field on a hunt, fishing at a favorite lake or simply recreating outdoors, the eyes and ears of the public can be vital in catching those doing wrong.

Acts such as illegally stocking goldfish or poaching a large buck reflect not only on a single individual, but also on the entire hunt-ing/outdoor community and the State of New Mexico.

Above: A bull elk killed by a poacher and left in a field to rot. NMDGF photo.

“However inaccurate it might be, a number of people still refer to poachers as hunters,” said Capt. Ty Jackson with the New Mexico Department of Game and Fish. “But that’s an unfair assessment. Would you call someone who breaks a mailbox with a bat a professional baseball player?”

In addition to poaching, acts such as the unauthorized stocking of pike in Eagle Nest Lake has cost Game and Fish money that could have been better spent.

For those encountering an illegal act, or some-thing they believe might be illegal, there are important “should” and “should not’s” for the public. Following these recommendations will increase the likelihood of an arrest being made and keeping the witness safe.

“Poachers tend to brag,” Jackson said. “Modern poaching is about ego and/or greed. It is not about feeding a family.”
This need to share information means there are those who know a crime has been committed, but there are important guidelines to follow when reporting a violation.

“There’s no shortage of people who want to help us catch violators,” Jackson said. “However, there are instances when those desires can actually hinder law enforcement efforts.”

Jackson said there are times when those who witness a crime inform the violator they will be calling Operation Game Thief or report a Face-book post. They may also attempt to conduct their own investigation and gather evidence in an attempt to help, but both actions can hinder and complicate an investigation.

“In situations like these the poacher will almost always leave the area before law enforcement can arrive, or delete an incriminating post or photo,” Jackson said. “A better approach is to simply be-come a good witness. Take notes and, if possible, photos.

“Simple details like a license plate number and state, or the make, model and color of a vehicle, GPS coordinates and clothing descriptions are all invaluable to responding officers.” 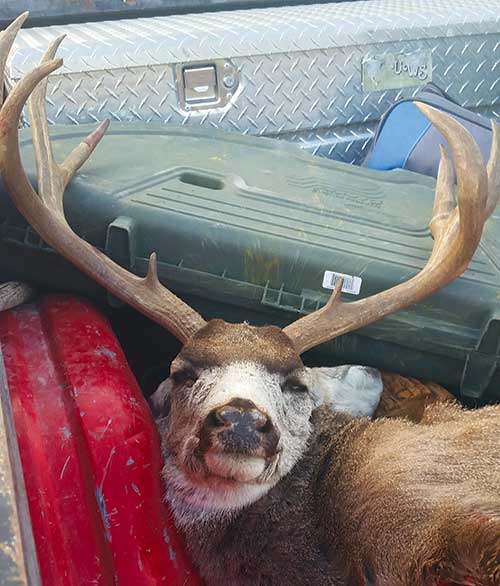 Modern poaching is rarely about feeding a family and it should not be confused with hunting. Hunting is a legal activity and poaching is a crime. Wildlife population estimates determine the number of licenses for legal take, which helps manage specific populations. Poachers are stealing from all residents of New Mexico. NMDGF photo.

Witnesses should avoid contact if possible and never confront a poacher. Directly confronting suspected violators in the backcountry can be dangerous. Call the OGT hotline or submit a report through the OGT website as soon as possible with the information.

“Allow trained officers to handle the confrontation,” Jackson said. “People should focus on being a good witness and never put themselves in harm’s way.”

Other potential mistakes include getting too close to the scene, examining a dead animal or waiting too long to contact OGT.

Evidence that has been disturbed or picked up by a witness can result in a poacher skating on what would have otherwise been an open-and-shut case.

“Additional footprints, tire tracks and general disturbance of the area make an investigation difficult, if not impossible,” Jackson said. “If the death of a wild animal appears to be suspicious, people should assume a violation has occurred and contact OGT, the local conservation officer or state police dispatch and provide the location. Do not disturb the area around the site.”

Waiting a day or two to report a wildlife violation is also problematic. With time comes the loss of evidence due to scavengers or poor weather conditions, such as heavy rain.

“Evidence can be lost in a short period of time,” Jackson said. “The quicker we can get an officer to the scene, the more likely it is we’ll be able to identify a suspect, locate evidence, interview additional witnesses and build a case.” 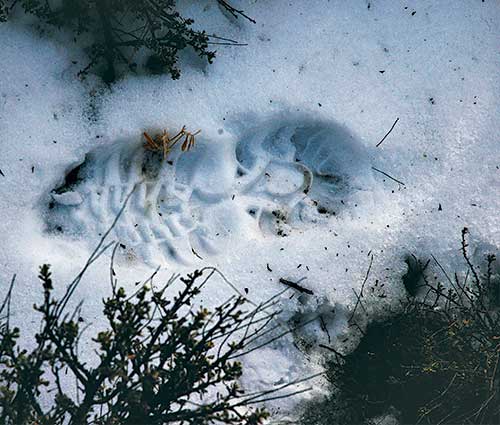 Two rules in helping conservation officers catch poachers is to report suspected illegal activity quickly so evidence is not lost and to leave the scene undisturbed so evidence can be photographed and/or collected. NMDGF photo.

And eyewitness accounts are not always necessary to bring a poacher to justice. Overhearing someone brag about a poaching case in a bar or restaurant, or a posting and photos on social media can certainly help.

“While it may not be an eyewitness account, such reports regularly prove to be valuable in cases,” Jackson said. “When we get enough pieces of information, we can complete the puzzle.”

Those wishing to report a violation are encouraged to contact OGT because they can remain anonymous, which can’t be guaranteed to individuals contacting one of the Game and Fish offices.

“Confidentiality is often critical for those who witness a crime and may be concerned for their safety or reputation, but want to report it,” Jack-son said. “We take this trust seriously.”

Anyone witnessing or suspecting a violation should contact the OGT 24-hour toll-free hotline, (800) 432-GAME (4263). Web submissions can be submitted by visiting wildlife.state.nm.us/ogt. Rewards are available for information leading to charges being filed.