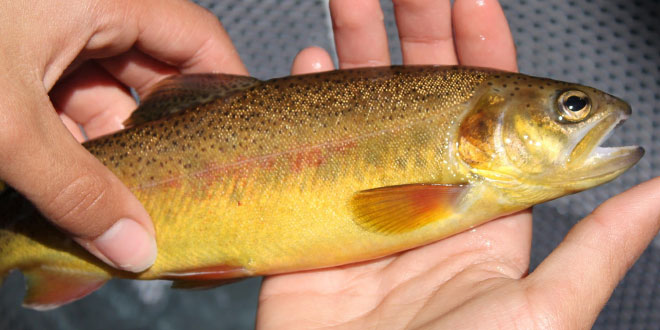 Whitewater Creek contains more than 16 million gallons of water running through 23 miles of stream. This remote creek in the Gila wilderness in southwestern New Mexico is one of a handful of southwestern creeks home to native Gila trout, a rare species once federally listed as endangered.

By sampling bodies of water, Department biologists can detect the presence of non-native and invasive species.
After the Whitewater Baldy Fire of 2012, the largest recorded fire in New Mexico history, Department of Game and Fish biologists were tasked with restoring Gila trout, now listed as threatened, to the creek—a task that involved first removing non-native fish species, such as rainbow trout, from Whitewater Creek and second, confirming that they were no longer present in the water.

Detecting a specific species of fish in millions of gallons of water running through a stream several miles from the nearest paved or dirt road can be an arduous, time-consuming task for researchers.

That’s where environmental DNA (eDNA) technology steps in. Similar to crime scene technicians, biologists gather samples from the environment hoping to collect DNA that was left in the system from their target of interest. Traces of shed DNA are left in bodies of water via substances such as fish mucus, feces and skin. 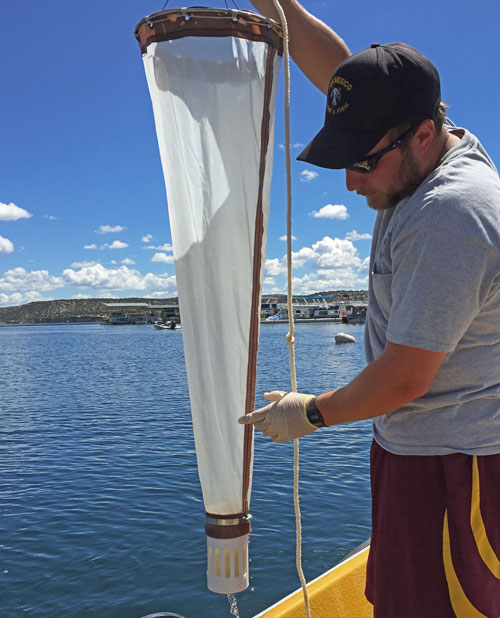 But, this is only one way biologists are putting eDNA to use in conservation efforts. The Department currently uses eDNA technology for three purposes: recovery and restoration of a native species, early invasive species detection and forensic law enforcement.

On the wildlife management side, eDNA has been utilized in other wildlife projects such as detection of the elusive, state-threatened Sacramento Mountains salamander. In addition, research is being conducted on the utility of eDNA to find the rare state and federally threatened narrow-headed gartersnake as well.

For fisheries biologists, this research method enables biologists to sample streams, creeks, rivers and lakes and test for the presence of native or non-native fish species.

“eDNA is a great tool for determining the presence or absence of a species in a large-scale remote system like Whitewater Creek,” said Ryder Paggen, Gila trout biologist with the Department.

The end goal of the project? To recreate a recovery population of Gila trout. This means ensuring an environment where the fish can thrive without competition from non-native species such as rainbow trout.

“Non-native trout can’t be present,” said Paggen. “They are very competitive and will overtake a stream. What the Department is trying to do is remove the non-native fish to give Gila trout an environment where the species can survive and thrive. The last thing we want to do is stick Gila trout into a non-native population.”

Gila trout are not the only native fish the Department is currently restoring with the help of eDNA.

Fisheries biologists are currently working on projects throughout the state to restore Rio Grande cutthroat trout. A restoration project is underway in the Rio Costilla Basin; biologists plan to enter the final phase of the project in 2020, said Tucker Brauer, Rio Grande cutthroat biologist with the Department, adding that his team is also in the planning stages of a similar project on Willow Creek located in the upper Pecos River Basin.

Regarding the use of eDNA in fisheries projects, Brauer noted the technology can be used in both the piscicide project planning and monitoring stages.

For decades, biologists have surveyed fish populations in streams and rivers using electrofishing—injecting a current into the water that shocks the fish, causing them to float to the surface.

Both eDNA and electrofishing come with their own pros and cons. The availability of eDNA research by no means eliminates the need to electroshock.

“Environmental DNA is a good presence absence tool but it can’t quantify any population dynamics,” said Paggen. “We often take eDNA as well as conduct electrofishing operations to ensure we get the best possible sample collection.”

The Department uses eDNA in conjunction with piscicide treatments, applying a chemical to the stream to remove non-native fish, said Jill Wick, native fish program manager with the Department. 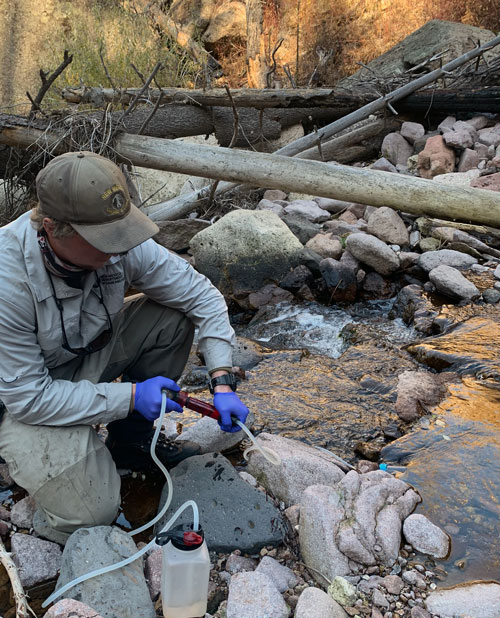 “eDNA is one of the ways to verify we’ve removed all the fish,” said Wick, noting that biologists also use electrofishing as a way to confirm the removal of all fish prior to the reintroduction of a native species. While electrofishing provides evidence of an actual fish, eDNA is a faster technique. “We don’t have to carry a lot of gear, and eDNA takes less time—one week of work when electrofishing can take three weeks.”

eDNA can also potentially target the exact location of fish in a body of water.

“We looked at tributaries in very steep difficult-to-access places,” said Paggen, estimating that the method can detect DNA from one fish in 250 meters of stream. “What we wanted to do was make sure non-native fish weren’t residing in these. With eDNA you can pick out where the fish presence is, say they are here or there. We want to target this project and get an idea of where they are in the whole entire stream including tributaries.”

Through the process, Paggen continued, biologists look at eDNA as a key way to discover or detect a species—not necessarily the amount of fish present, but how successful the eradication program has been.

The technology is utilized for more than native species restoration. eDNA has become indispensable when it comes to keeping aquatic invasive species from infiltrating bodies of water in the state.

“We use it as an early detection technique,” he said, explaining that he collects water plankton tow samples that are then sent out for DNA analysis. “Zebra and quagga mussels are pesky and we don’t want them [in our state].” (Mussels have invaded our neighboring states, making early detection critical for effective control; however, to date, New Mexico is free of both zebra and quagga mussels.)

It can be difficult to detect an invasive mussel in large water bodies in New Mexico such as Navajo or Conchas Lakes, Dominguez explains. “We’d have to send someone diving to look for them,” he said. For his purposes, eDNA is limited to high use areas around the marina, dams and areas boaters go where biologists would expect invasive mussel colonizations.

When looking for evidence of an invasive species such as invasive mussels, Tracy Diver-Franssen, fish health biologist with the Department, imagines points of introduction into a a lake similar to a crime scene. “Sampling every possible point of entry or colonization is time consuming,” she said. “Instead, [using eDNA] we can take a big quick sample of the lake, letting us know if mussels could be present, and, if so, where we need to focus our [manual survey] efforts.”

And because of that, researchers have to be aware of the possibility of false positives, she noted. For example, if boots or waders come in contact with trout tissue it could result in a false positive detection for trout, meaning trout DNA was present but the animal was not, Dominguez pointed out. Care in sampling technique is extremely important.

Still, Diver-Franssen notes the technique can be more cost effective than sending out a large team to conduct more traditional surveys.

“Though it’s not a perfect tool, it can act as an index or indicator for the presence of a target species,” she said. “If you are interested in an endangered or rare species, it’s a good non-intrusive way to detect them.”

DNA has been used as a means to assist in criminal investigations for many years. This is true, too, in the realm of wildlife law enforcement.

Early on, DNA was really only used for very large-scale wildlife investigations due to the high cost associated with analyzing it. Over the past decade, technological advances in this field have made DNA analytics very cost effective and affordable. Now, it is very feasible to utilize DNA in many wildlife crimes.

Any wildlife crime needs certain information to solve the case. Many wildlife law enforcement professionals refer to this information as the “IDLE” facts. The identity of the person responsible for the crime, the date the crime occurred, the location of the crime and evidence connecting the crime to the person, are all pertinent to a successful case.

DNA truly acts to fill in pieces of this puzzle when investigating wildlife crimes. For example, if a wildlife law enforcement professional responds to a call where a deer was shot and killed and the head was removed by a poacher solely for the trophy, a DNA sample would be taken from the deer carcass. Thus far, the date and location have been established. Evidence at this point also includes the deer carcass and the DNA sample collected by the wildlife law enforcement professional.

Once a suspect has been identified, albeit through eyewitness accounts, an anonymous Operation Game Thief (OGT) tip or by other investigative means by the wildlife law enforcement professional, an identity becomes established. Now, the important part is to link the evidence to the identity. This is where DNA often plays a role.

The wildlife law enforcement professional may collect a piece of deer hair, a swab of blood, a knife with blood on it or even a deer skull via the proper legal law enforcement avenues from the suspect.

Using DNA analytics as a tool, the DNA sample taken from the poached deer can be sent in conjunction with these other items to a wildlife forensics lab (the Department of Game and Fish uses the Wyoming Wildlife Forensics Laboratory) to be analyzed and cross referenced. If any of the DNA on the deer hair, the swab of blood, the bloody knife or the deer skull taken from the suspect match the DNA from the poached deer, the Department has connected the evidence with the identity.

Now criminal charges may be filed and a poachers can be brought to justice and held responsible for their crimes.