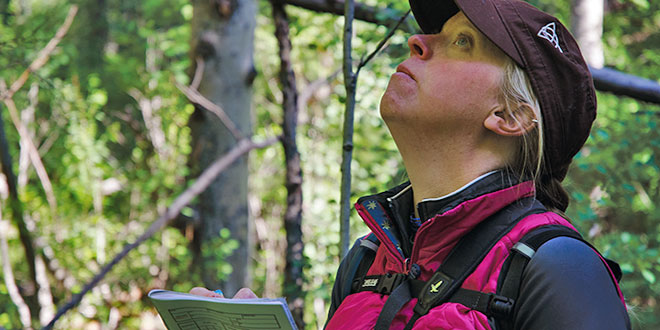 Walking through the Sangre de Cristo Mountains in the Santa Fe National Forest offers the opportunity to see wildlife diversity.

When trying to identify small birds, there are times it helps to close your eyes, stand perfectly still and listen for specific songs. The method requires spending time studying the many different calls any particular bird can make.

Above: Kirsten Cruz-McDonnell, chief biologist for Envirological Services, Inc., walked a predetermined route in the Santa Fe National Forest, stopping at up to 20 points for 10 minutes identifying different bird species primarily by their calls. Photo by Zen Mocarski.

“Remembering all the calls can be difficult, but the process is simple: Head out in the early morning and listen,” said Kirsten Cruz-McDonnell, chief biologist for Envirological Services, Inc. “It takes a lot of practice, and I’ve got 20 years of experience.”

For some, the practice may be for pleasure, but for Cruz-McDonnell and Octavio Cruz-Carretero, the work is part of a research project. They have spent the last two years in search of Grace’s and red-faced warblers, two understudied species in New Mexico.

The two are working to develop a more accurate statewide population estimate.

The Grace’s warbler lives high in pine trees and feeds on insects. That, along with its diminutive size, has made the bird difficult to research because they are difficult to see. In the United States, the red-faced warbler occurs only in New Mexico and Arizona in high-elevation forests.

The purpose of the project, which is partially funded through the New Mexico Department of Game and Fish Share with Wildlife Program, is to estimate population sizes of both species in New Mexico and provide department biologists with baseline data that will help future management.

“New Mexico has a high stewardship responsibility because so much of the population of these two warblers occurs in the state,” Cruz-McDonnell said. “But we aren’t limited to those two birds. We are cataloging everything we hear or see with the same methodology so we’re getting species inventories for the different ranges throughout the state.”

The two avian experts are in the process of conducting two-mile transects, a predetermined route used to conduct observations. They stop at up to 20 points for 10 minutes during each of the transects.

“We follow standard guidelines that’ve been established for conducting point-count surveys,” Cruz-McDonnell said. “Consistency is important when trying to determine population sizes and densities in mountain ranges throughout New Mexico. We need one methodology so we can calculate a robust estimate of densities.”

Two years into the research effort, they have documented over 100 species, but remain focused on their primary subjects. To do so, the researchers are examining population status in ponderosa pine forest ranges throughout New Mexico, but knowing where they should occur and actually identifying the range are difficult tasks to accomplish.

“Looking at them visually is extremely difficult, especially for the Grace’s warbler,” Cruz-McDonnell said, noting the small birds tend to stay near the tree tops. “If we were to try and do this visually, we wouldn’t get an accurate representation of the population.

Although the work can be tedious at times, two years into the research effort the two biologists have found satisfaction in the findings.

“One thing that surprised me is how common the Grace’s warbler is in their specific habitat,” Cruz-McDonnell said. “That’s good news and I hope we’ll continue to document higher-than-expected numbers as our research continues.”

Getting out in nature and listening to the many different sounds heard in the wild is a practice Cruz-McDonnell encourages others to try because it provides an opportunity to connect with nature.

“People don’t need to learn all the bird calls,” she said. “That would be quite a lengthy process. Talking to other birders can help, but there are also many apps available with a variety of calls as well as their historical range.

“Start with the most common species that can be found in a particular area and then work on figuring out the ones that are different.”