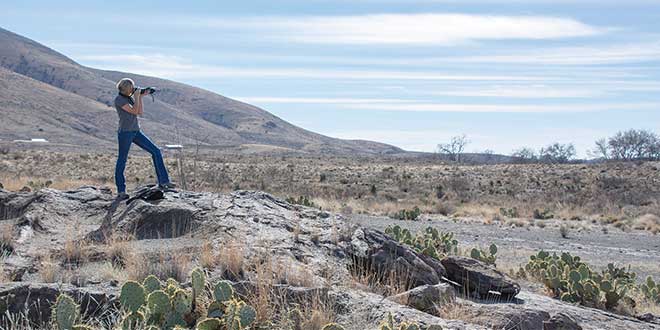 Have you ever visited an outdoor spot where you could sense the importance of the area? No historical marker telling you so. No fanfare. You just simply felt the gravitas?

That is the case for me with River Ranch, a new Department wildlife management area near Faywood, north of Deming.

Above: River Ranch WMA is a great place to photograph and watch wildlife. Department photo by Jeremy Lane.

River Ranch is located directly on the Mimbres River, a lifeline in the desert today the same as it was 1,000 years ago. The Mimbres has allowed for a concentration of wildlife that wouldn’t convene together just miles away from its waters.

Deer, turkey, javelina? Absolutely, but other, less-common species, too. A Gila monster was photographed there about four years ago. Draw a line south from Silver City to Animas and that is about as far east as that iconic lizard is naturally found.

Slightly over a thousand acres in both Grant and Luna Counties, the property is home to large mottes of cottonwood and velvet ash. “Motte” isn’t a word you get to toss around very often in the desert southwest. “The state record-sized velvet ash tree, measuring 224 inches in circumference and 95 feet tall, resides on the property in Tigner Grove, which was named after early owners of the property,” Ryan Darr, lands program manager with the Department explained.

The grove is a 6.8-acre mature, deciduous stand of species like Arizona walnut, soapberry and box elder, Darr continued, noting that as one might suspect, wildlife greatly benefit from Tigner Grove as well. The southernmost known population of Arizona gray squirrel resides there, too.

Zone-tailed hawk and black hawk are known to nest there. Ours is one of only a handful of states in the country that regularly sees those species, let alone nesting activity. Now that the birders are salivating, I’ll also mention yellow-billed cuckoo, southwest willow flycatcher and thick-billed kingbird.

The property was purchased in July 2014 and was operated as a cattle ranch prior to that. The most-recent owners, Gene and Elisabeth Simon, wished for the property to stay undeveloped and for a wildlife management agency to purchase, manage and conserve River Ranch for the people of New Mexico, Darr noted.

There are also large swathes of grassland dominated by big sacaton, which definitely lives up to its name, growing well over six-feet tall typically.

“Before thinning the sacaton, there was little room for wildlife movement. The thick bunch grass posed a fire-carrying risk to Tigner Grove and was so dense that we were seeing fewer young trees than we would like,” explained Darr.

Along with the unique offerings of plants and wildlife, the property boasts a pretty impressive historical presence as well. Ancient humans thrived on this property and the Mimbres River, constructing multi-story dwellings that were once surveyed by the Smithsonian Institution. Those houses and their occupants are long gone, but their importance remains and is protected.

There have been many improvements to the property since the Department took ownership. “Just this year, three miles of internal fences were taken down to allow for better wildlife movement, as well as the removal of exotic or invasive species, adding signage and starting trail work,” Darr said. “The area was opened to the public in April 2019 and is a great destination for hiking, bird-watching and photography.”

To find River Ranch, first find the entrance to City of Rocks State Park and then continue northeast on Highway 61 for about three miles and look for New Mexico Game and Fish signage at what appears to be a residence. You can visit seven days a week, accessible 30 minutes before dawn and closing 30 minutes after sunset.

For each group of four adult visitors to the property, at least one of them needs a New Mexico hunting or fishing license, or a Habitat Management and Access Validation (HMAV) stamp. Visitors under 18 years of age are exempt from these access requirements. There is no hunting, fishing, camping or motorized vehicle use currently allowed at River Ranch.

Go and see the wildlife, stand in awe of the massive trees in Tigner Grove, listen to the Mimbres River and feel the importance of this space for yourself