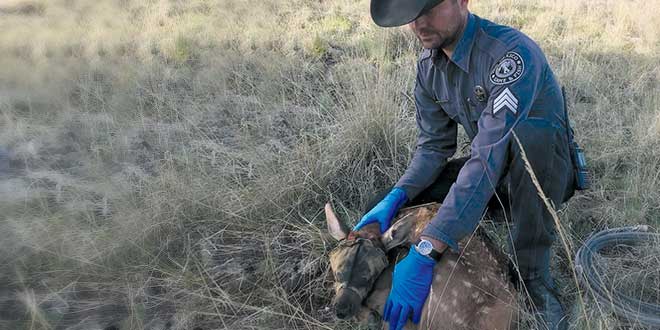 On an early June morning in the Gila National Forest, Department of Game and Fish conservation officers and biologists stop their pickup trucks along a winding dirt road. It’s a quiet, sunny morning; the only faint sound is the whirling of a distant, lone helicopter scanning the landscape below for elk.

The team hikes through a forest of juniper, pinion and ponderosa pine; a cow elk has been spotted nearby and most likely not far away, her calf would be bedded down, it’s only defense against potential danger. The group is searching for that calf.

They practically stumble upon it— a calf bedded down, pressing itself flat, as close to the ground as possible. Elk calves are not always so easy to spot; this one blends well into the dried grass.

The calf remains still as the team moves in to hold it in place. It’s quickly blindfolded to help it stay calm. The team gathers data on the calf, taking its weight, measuring its length and assessing its behavior. A biologist examines the umbilical cord and teeth to determine its age. This one is about three to four days old.

After a VHF (very high frequency) tag is clipped to its left ear, the animal dashes off with the wobbly gait of a newborn to rejoin its mother. The group spots the helicopter in the sky and returns to the trucks.
There’s a chance the helicopter has located some cows and with them, more calves to tag.

This single capture was part of a large scale, multi-year project studying elk in southwestern New Mexico and eastern Arizona to better assess the potential influence of Mexican gray wolf recovery on the elk population, said Nicole Tatman, big game manager with the Department of Game and Fish. Each calf is ear-tagged with a radio-transmitter designed to notify biologists when a mortality occurs.

Elk are the primary prey species for Mexican gray wolves and elk populations elsewhere have declined following wolf reintroductions, explained Tatman. “Monitoring elk survival in the Gila will help us understand how [various] factors impact the elk herd,” she said. For the Department, she added, these findings will ultimately assist in determining the number of elk that can be harvested without causing a population decline.

The captures are conducted in collaboration with Arizona Game and Fish Department, the U.S. Geological Survey at New Mexico State University (NMSU) and the U.S. Fish and Wildlife Service. Funding for the captures comes from the sale of hunting licenses as well as through a $2 million grant from the Federal Wildlife and Sport Fish Restoration Act.

Thus far, the Department has captured around 420 adult female elk and 225 elk calves across Arizona and New Mexico, said Tatman. The next stage of the project will be to capture adult female elk this year and capture elk calves again when they are born in May and June 2020.

Once top-of-the-food chain predators throughout the American southwest, Mexican grey wolves were reintroduced to eastern Arizona and western New Mexico in 1998. Elk are a key portion of the wolf’s diet and also one of the region’s most hunted big-game animals; hunters throughout New Mexico and the United States apply annually for an opportunity to draw an elk tag.

Today, there are approximately 131 Mexican gray wolves in Arizona and New Mexico.

Last November, the State Game Commission approved the release of up to 12 wolf puppies into the wild in New Mexico.

Due to unregulated hunting, trapping and poisoning that began in the late 1800s, few Mexican gray wolves remained by 1950, and by 1970 the last wild Mexican gray wolf in the United States was killed. In 1977, the U.S. Fish and Wildlife Service initiated efforts to conserve the species.

To better determine the impact of wolves on the region’s elk, study areas were divided into high wolf density and low wolf density areas. Additional data from adult cow and calf survival from two reference areas in the Jemez Mountains and Mt. Taylor, that currently lack wolves but share similar habitat conditions with the Gila areas, will also be used to compare survival and cause-specific mortality rates, according to the project proposal.

Later that day, around sundown Tatman heads out to another spot in search of more calves. She scans the forest with binoculars, looking for lone cows acting “calfy”— meaning they are more vigilant and actively looking out for danger because they are with their calves and isolated from other elk.

Spotting calves is not so easy. Bedding down may not seem like the best way to avoid falling victim to a larger predator; however, noted Tatman, calves have no scent.

“At this point, field crews led by NMSU are regularly monitoring elk calves for survival and investigating causes of mortality when detected,” she explained noting that in a few years, the data will be compiled and the Department will begin analyzing and summarizing the findings. “This will lead to better-informed management recommendations for the Gila elk herd in an area where Mexican wolves exist on the landscape.”